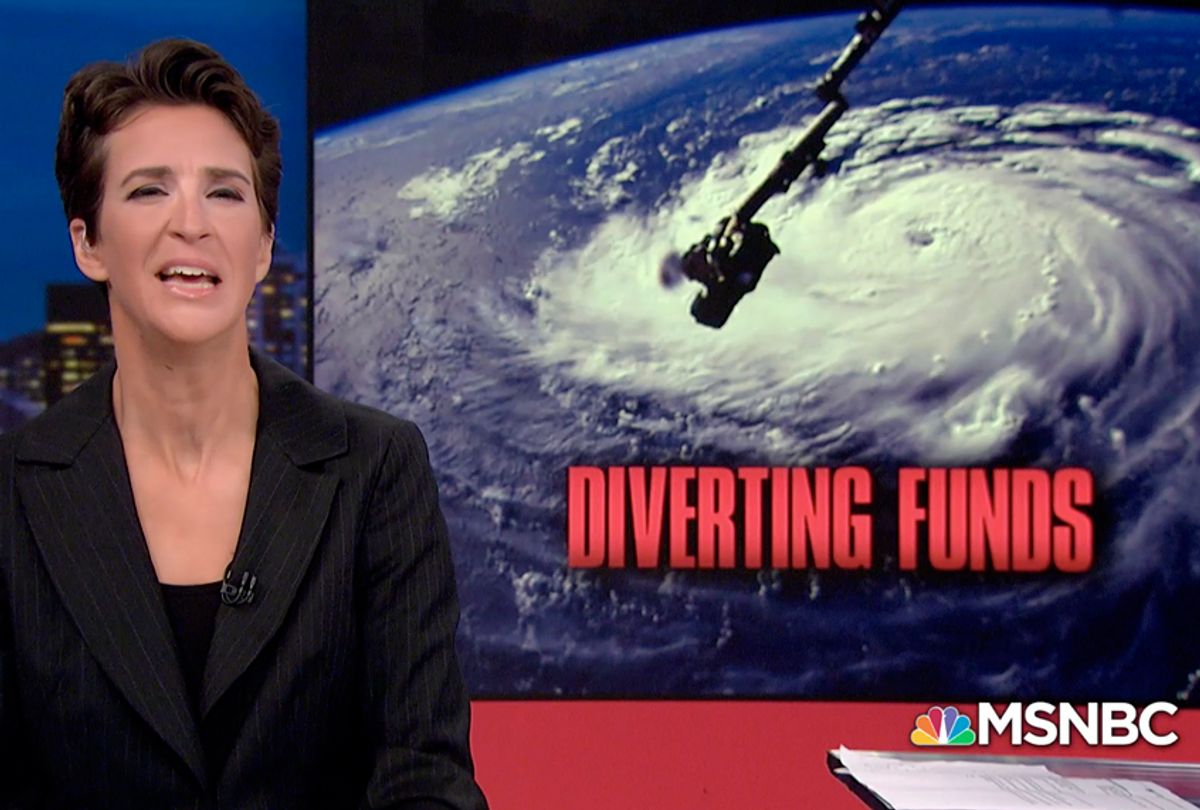 The Department of Homeland Security (DHS) transferred $29 million from the U.S. Coast Guard to the Immigration and Customs Enforcement agency (ICE) in order to fund the department's detention and deportation programs for undocumented migrants this year, according to a document sent to Congress by DHS.

Rachel Maddow broke the news about the transfers Wednesday night on her eponymous MSNBC show.

The news follows Rachel Maddow's Tuesday report, which revealed that President Donald Trump's administration requested to transfer nearly $10 million from the Federal Emergency Management Agency (FEMA) to the Immigration and Customs Enforcement agency (ICE) in order to fund the department's detention and deportation programs for undocumented migrants, according to documents provided to the MSNBC host by Sen. Jeff Merkley (D-Ore.).

The revelation is extraordinary given the extreme devastation in the chaos of last year's hurricane season and its aftermath, which resulted in excess deaths, an outbreak of leptospirosis and one million Americans without drinking water. A recent report revealed that nearly 3,000 died in Puerto Rico in the six months following Hurricane Maria in 2017 —  a far cry from the government's original official death toll of 64.

The Department of Homeland Security, which houses both FEMA and ICE, confirmed the authenticity of the documents to Maddow, although it said the movement of funds ahead of hurricane season had not come from emergency response budgets.

However, Merkley disputed this statement, citing lines in the documents that appear to clearly state the Cabinet-level department had transferred money from "response and recovery" to expand immigrant detention. "If $10 million comes out of FEMA knowing what we had last year . . . I find it extraordinary," he said.

In response to the news, DHS spokesperson Tyler Houlton tweeted Tuesday night that "under no circumstances was any disaster relief funding transferred from FEMA to immigration enforcement efforts. This is a sorry attempt to push a false agenda."

Houlton added that the transferred money came from routine operating expenses and "could not have been used for hurricane response due to appropriation limitations."

Earlier on Wednesday, FEMA director Brock Long told NBC News' Andrea Mitchell that none of the $10 million transferred from FEMA to ICE came from the Disaster Relief Fund, accusing Merkley of "playing politics" ahead of Hurricane Florence.

"Right now, that money has nothing to do with what you see behind us," Long said.

Despite the Trump administration's efforts to reduce the number of undocumented families coming to the United States, roughly the same number of kids are crossing the border as in years past and the number of migrant children in federal detention centers has reached the highest ever in the past year, The New York Times reported Wednesday.