Disaster president: Why is Trump acting like the mayor from Jaws?

OK, the analogy may not be perfect, but it makes way too much sense. Can we marvel at the pathetic irony? 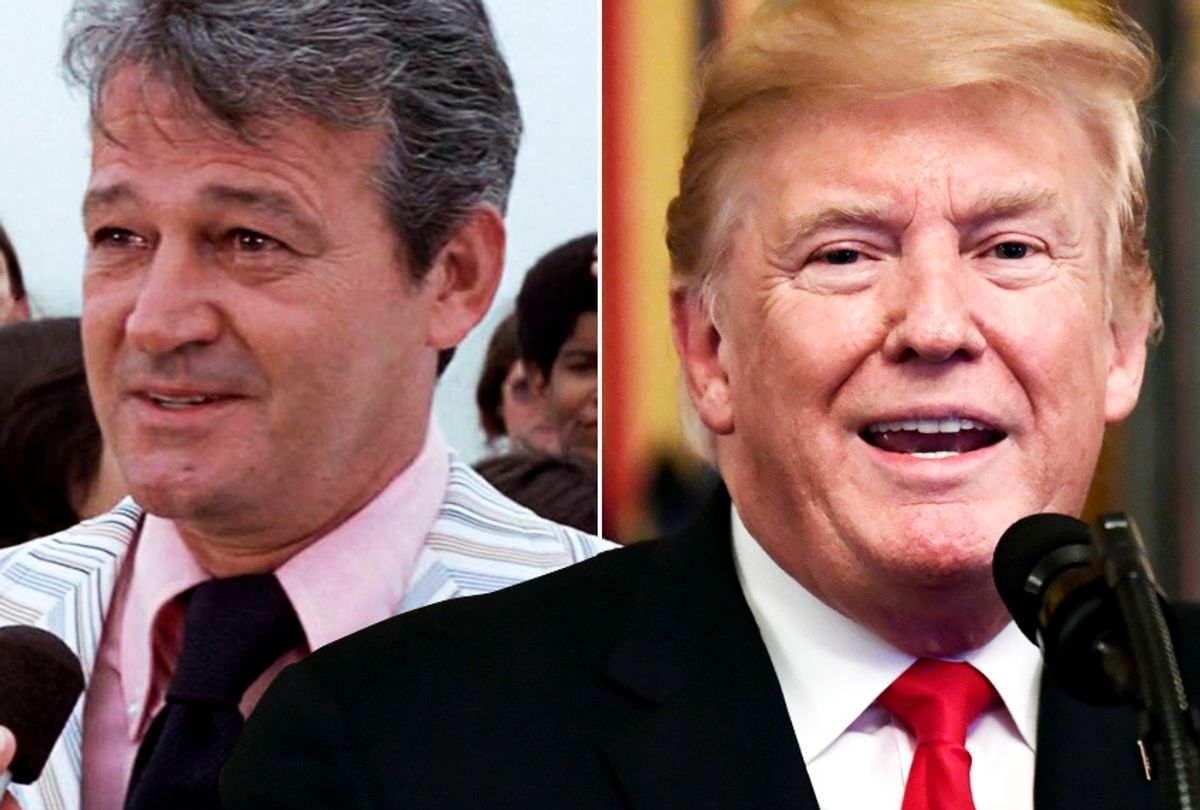 Sometimes comparing the history of our species to fiction can offer a clarity of perspective. We notice parallels between the foibles of the fools we construct with our imaginations and the ones who appear in real life.

Consider President Donald Trump's demeanor as Hurricane Florence strikes the Carolinas and the cosmically bumbling Mayor Larry Vaughn (Murray Hamilton) from Steven Spielberg's 1975  film, "Jaws." Considering that Vaughn's great weakness was insufficient fear of sharks, and Trump is reportedly quite scared of the toothy predators, the analogy should resonate with him.

Despite Trump's tendency to defy his party on a handful of issues in the name of dumb positions (see: trade policy), he has fallen right in line with other Republicans on the great existential issue of our era. Republicans become wishy-washy when it comes to global warming, sometimes by denying that it's happening and sometimes by questioning the extent to which it is caused by humans and (at least recently) almost never supporting government interventions to address the problem, such as stronger regulations on polluting industries or investment in green technology. Trump being Trump, he prefers to explain things with an outlandish conspiracy theory — here in the past, he has blamed the Chinese. And of course he has financial ties to industries that would take a hit if more aggressive policies were implemented.

There is an obvious analogy to Mayor Vaughn, who cares more about making money from the tourism industry than listening to scientific experts whose advice go against his pocketbook and his ideology. In Mayor Vaughn's case, as anyone who's seen the movie can tell you, the fictional town of Amity Island is being besieged by a monstrous, man-eating shark. He doesn't want to hear about it.

The shark in Trump's case is a whole lot bigger, but what we see is a similar failure of leadership. The foremost responsibility of any leader is to protect the human beings who have entrusted him or her with their safe passage through this life. If there ever was an issue where Trump could demonstrate genuine leadership in the most meaningful sense of the word, it would be on this one.

"Human-caused increasing greenhouse gases in the atmosphere produced an energy imbalance and its partitioning between atmospheric, ocean, cryosphere and land heat reservoirs govern how the global climate evolves," Kevin Trenberth, a senior scientist in climate analysis at the National Center for Atmospheric Research, told Salon by email. "Most of the imbalance, over 90 percent, goes into the ocean and accordingly ocean heat content (OHC) provides a primary indicator of climate change, along with sea level rise."

Trenberth said that 2017 "was the warmest year on record for the global OHC down to 2000 [meters] depth and the latest quarter (April to June) is the hottest on record. The heat fuels storms of all sorts and contributes to very heavy rain events and flooding."

Hurricanes are natural events, Trenberth noted, but "climate change is supercharging them." Higher sea surface temperatures and higher levels of atmospheric moisture "fuels tropical storms to become more intense, bigger and longer lasting, thereby increasing their potential for damage. Sea level is also steadily rising, increasing risks from coastal storm surges. The damage and loss of life from such storms does not have to be disastrous, however, if there is adequate preparation."

Yet Trump has pulled America out of the Paris climate accord (which Hillary Clinton surely would not have done). He has wiped information about climate science from the EPA website. He has given regulatory power to politicians who are in the pockets of energy interests that oppose all regulations. He has, in other words, demonstrated precisely the kind of flawed, blinkered, narrowly self-interested leadership that one would expected Amity Island's Mayor Vaughn -- if he was a global warming denying Republican, cross-bred with a Captain Planet villain.

It's impossible to determine the exact connection between climate change and Hurricane Florence, or for that matter Hurricane Maria, or any of the other natural disasters that have occurred during Trump's presidency. And of course I'm not suggesting that Trump's election, or his disastrous environmental policies, caused these natural disasters, only that the correlation is ironic and suggestive.

Trump didn't create the climate crisis, and hasn't been in office long enough to make it measurably worse. But like Mayor Vaughn -- who was not personally responsible for the shark attacks -- he's guilty of caring more about greed and perceived short-term economic interest than about the long-term health and welfare of the people he supposedly serves. He's been an easy mark for the asinine arguments of hucksters and climate deniers.

How deep does this instructive parallel run between a 21st-century president and the hapless villain of a pop-culture classic made 43 years ago? Maybe not that deep. All they had to do at the end of the movie was blow up the big shark, and Amity Island's problems were solved. We should be so lucky.

Matthew Rozsa talks about the war on science.