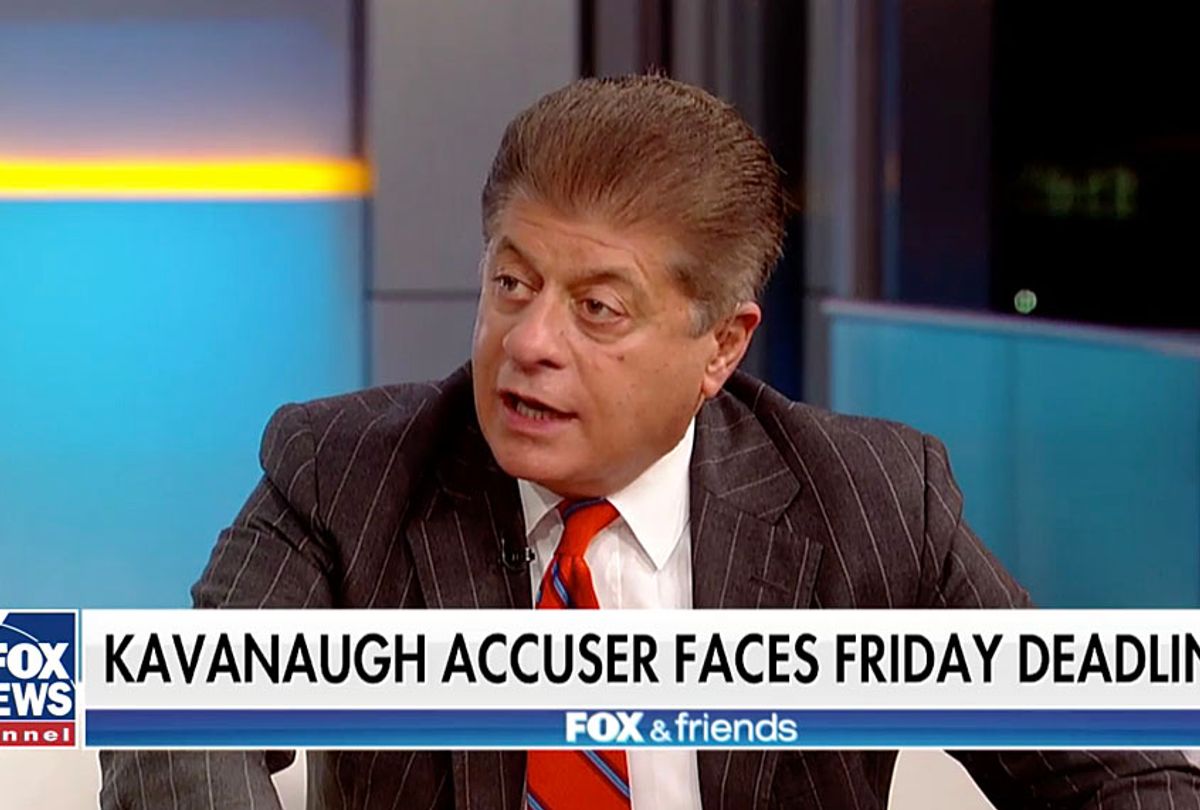 Fox News senior judicial analyst Andrew Napolitano argued that Dr. Christine Blasey Ford, the woman who accused President Donald Trump's Supreme Court nominee Judge Brett M. Kavanaugh of sexually assaulting her in the 1980s, should be subpoenaed and forced to testify to the Senate Judiciary Committee about her account.

"Here's the dilemma faced by Judge Kavanaugh," Napolitano explained Thursday on "Fox & Friends." "There's a basic rule of thumb — and this makes sense whether you're a lawyer or a judge or in a schoolyard — you don't deny something until you've been accused of it, until you can get your hands around the accusation."

"Right now, we're dealing with an accusation which is hearsay," he continued. "Dr. Ford spoke to a reporter for The Washington Post. The Washington Post printed what, in her view, is an accurate version of what Dr. Ford told her."

"Should Judge Kavanaugh be responding to an allegation recounted in a newspaper? Or should he be responding to the person who actually says he attempted to harm her?" Napolitano asked. "In the real world, it would only happen with the latter. In the real world, if she didn't show up, if she didn't articulate her allegations against him, there'd be no obligation on his part to respond."

"Now, [Kavanaugh's] dying to say, 'I don't know what she's accusing me of. I wasn't there. It didn't happen.' But it is dangerous to deny before — particularly under oath, before the allegation is made," he continued. "So, I have a suggestion, if I may, for [Senate Judiciary Committee Chairman Chuck Grassley] and company: Subpoena her."

Napolitano agreed with Kilmeade, adding that the Senate Judiciary Committee should also subpoena Ford's classmate Mark Judge, who, according to Ford, was in the room with Ford and Kavanaugh at the time of the alleged assault.

Later in the program, fellow co-host Ainsley Earhardt said it would be "great" if the committee did subpoena Ford because "that's very dangerous to accuse someone of that and then not follow through with it."

"Wouldn't that be great if [Senate Judiciary Committee Chairman Chuck Grassley] did subpoena her?" Earhardt asked. "Because then we could hear from her. She needs to be heard. If this is true, it is a problem. I don't think that he should be confirmed if this is true. If he's capable of that, he should not be confirmed. Most women would agree with that."

"But, if it's not true, if it's not true this is what 65 women in his past have said he is an upstanding guy, he's a great man. They don't believe that this happened," she continued, referring to the 65 women who vouched for Kavanaugh's character in a letter issued by Senate Republicans.

"He's a father, he's a husband and if someone is going to accuse a man of this, then they need to come forward," Earhardt added. "[Dr. Ford] already spoke to the The Washington Post. So,[Fox News senior judicial analyst Judge Andrew Napolitano] said, if she's already talked to the press about it, then she should come forward and speak to these senators so we can get to the bottom of this. That's very dangerous to accuse someone of that and then not follow through with it."

Ford and Kavanaugh have been invited to testify before the Senate Judiciary Committee on Monday. However, Ford has requested an independent FBI investigation into the sexual assault claim in order to "ensure that the crucial facts and witnesses in this matter are assessed in a non-partisan manner and that the committee is fully informed before conducting any hearing or making any decisions," according to a letter from her legal team.

Though many Democrats backed Ford's request for an impartial FBI investigation, Grassley rejected the calls for an FBI investigation and refused to ask for testimony from Judge, the man Ford says witnessed the account and who went on to become a conservative commentator with bylines in the Daily Caller and The Weekly Standard.

As my colleague Rachel Leah writes, "Grassley's response follows the laments of many on the right — including Trump, who nominated Kavanaugh — over a perceived lack of due process in the era of #MeToo. Ford's request for an FBI investigation into her sexual assault claim and for the presentation of relevant facts to the committee so that they can ask evidence-based questions is a way to move the hearing beyond relying on both individuals' testimony over a 36-year-old alleged encounter."