The "Full Frontal" host was filled with rage as she discussed Kavanaugh, his accusers and the GOP 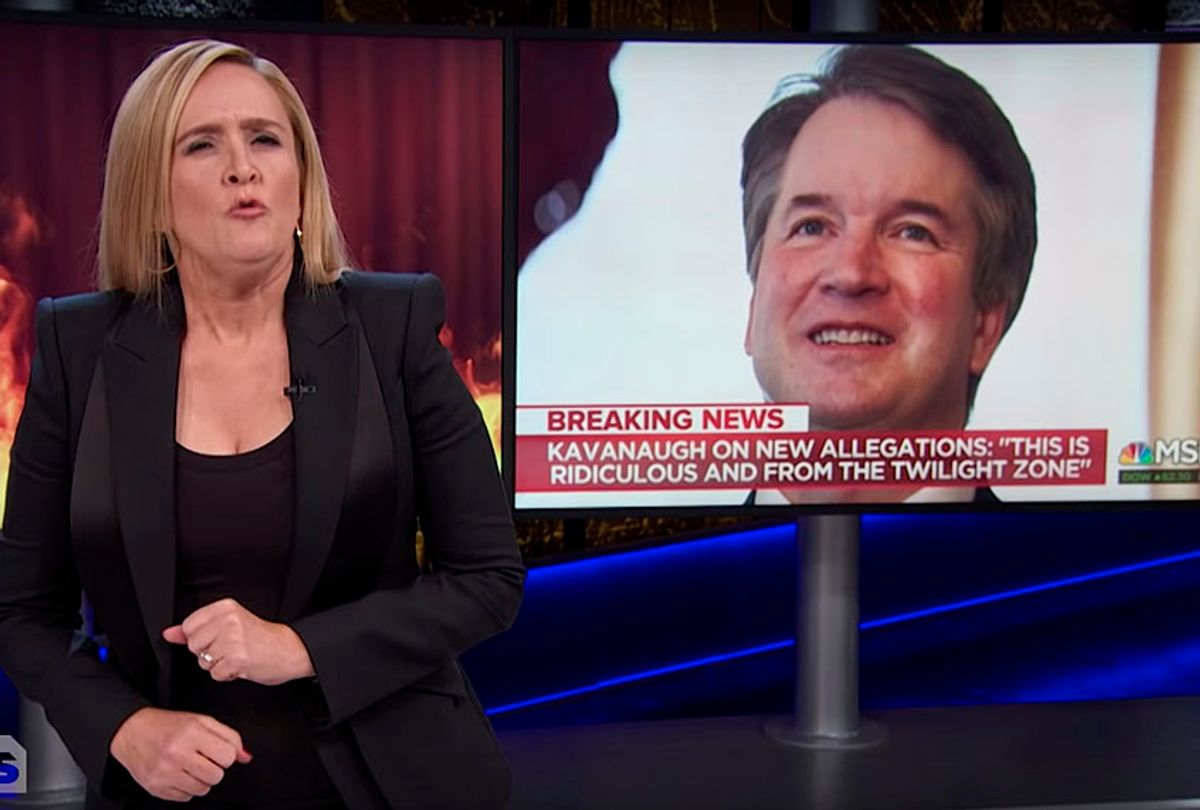 Visibly exasperated, Samantha Bee recapped the past week's "shit tornado of terrible news" during Wednesday's episode of "Full Frontal." Going over the growing sexual assault allegations against Supreme Court nominee Brett Kavanaugh and the GOP's shaming and dismissing of his alleged victims, Bee complained that it's gotten so bad she needed to literally set a sign on fire that read: "This Week."

"Watching the sexual-assaulter-in-chief do some classic victim-blaming is just one of the reasons I have been setting fires with my mind this week," she said. "But all the fires are inspired by Supreme Court nominee and man who definitely wears a popped collar under his robes, Brett Kavanaugh."

After airing news coverage of the sexual assault allegations and Kavanaugh's denial, Bee responded, "When it comes to allegations of sexual assault, it's like what I say about rat tails: one is too many and absolutely disqualifies you from the Supreme Court," the late-night host continued.

But as this week has proven, there are now more than one allegation of misconduct made against Kavanaugh.

Once Bee played footage detailing the third accuser who's come forward, Julie Swetnick, saying she watched Kavanaugh and other boys from high school get girls inebriated so they could gang-rape them, among other disturbing allegations, Bee lost it. "Of course, when the GOP heard the latest accusation, they immediately withdrew Kavanaugh’s nomination. I’m just kidding with you! They fired up the old slut-shaming machine."

The public attacks fired in from the GOP and its supporters. Republican Sen. Linsey Graham, who's been especially dismissive of all of Kavanaugh's accusers, charged that Swetnick couldn't be telling the truth because she kept going to these high school parties. Bee shot back, "Why did your friends at Fox keep showing up at work while Roger Ailes was hamburger-dicking everyone?"

Bee also reminded viewers about the allegations from Kavanaugh's Yale classmate Deborah Ramirez. "How was this lady’s story not enough?" she questioned. "Even if she’d been the only accuser, we should want a Supreme Court justice who definitely never shoved his penis in someone’s face."

"We, as a nation, can do better," Bee continued, adding that when Senate Republicans learned about Ramirez's accusation and before it was published in the New Yorker, they tried to "accelerate the timing of the vote instead of investigating." The late-night host asked, "Why would Republicans try to rush his nomination through faster when they found out about more allegations? That’s like realizing you have diarrhea and rushing away from the bathroom. It’s not really the right analogy, I just really hope Mitch McConnell has diarrhea today."

Despite all of that, Bee said the most "rage-inducing part of this week" was when Kavanaugh sat down with Fox News on Monday night for a "soft-lit, gentle, triggering-as-fuck interview," where he essentially said that all he did in high school was school work, sports and go to church. "OK, bitch, please don’t try to act like you went to high school in an episode of 'Veggie Tales' when your own yearbook says you were a member of something called the '100 Kegs or Bust' club," Bee said. "Somehow, I don’t think that was 100 kegs of platonic friendship."

Bee offered Kavanaugh some advice. Instead of getting 65 women to attest to his character, "Whatever Kavanaugh did to women in high school and college, a great way to persuade us that he’s not that guy anymore would be to stop gaslighting women now," she said.

"It’s not a great week to be an American woman," Bee added. "As of the moment I’m taping this show, I don’t know if Kavanaugh is going to withdraw from the nomination or if the GOP is going to crown him king of the good boys. If they do, Americans are going to have to live for decades knowing that there’s an accused sexual predator on the Supreme Court. Well, you know, more decades. At least Clarence Thomas will have a friend on the court who he can share a coke with."