Beto O'Rourke & Martin O'Malley: the dark horse ticket that could beat Trump in 2020

The pairing that could ride the blue wave to the White House – provided one small thing happens first... 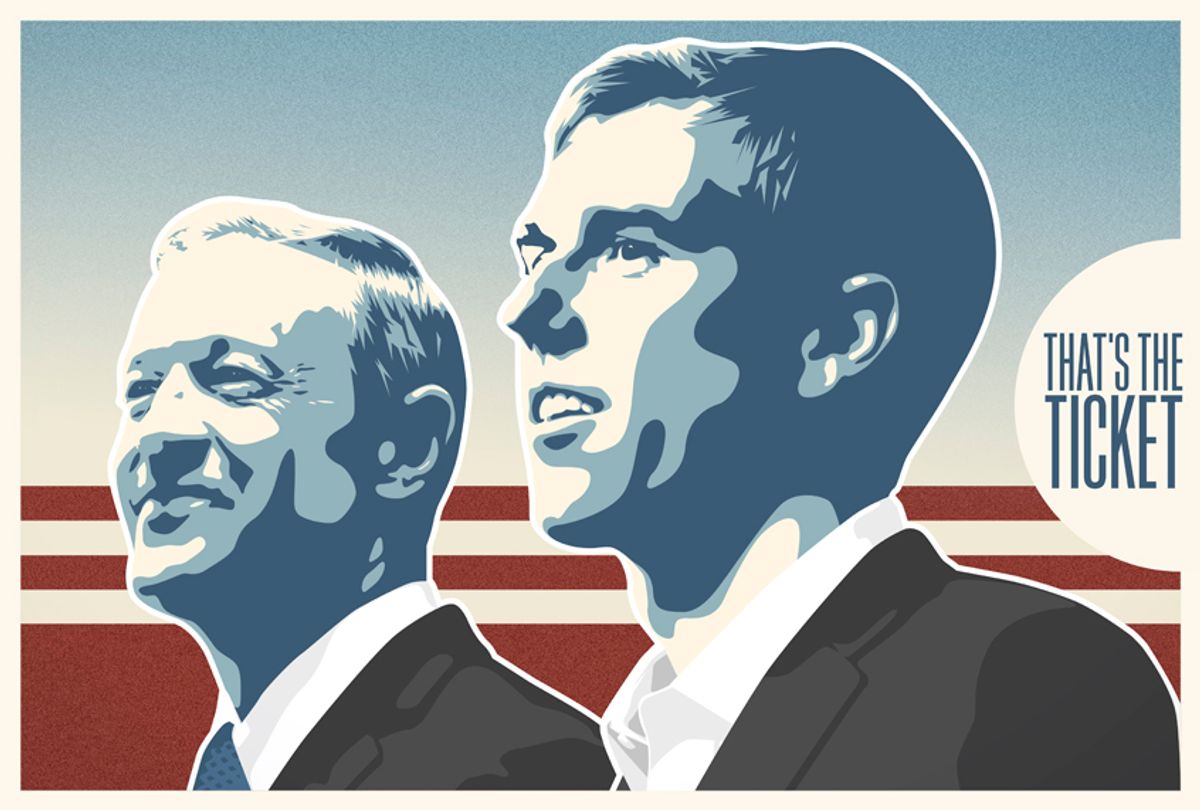 That's the Ticket is a regular series focusing on potential tickets in the 2020 presidential election.

Welcome to That's the Ticket! In this series, we will speculate about presidential tickets that might (or might not!) wind up competing in the demolition derby for the White House in 2020. The goal here is to have a little fun (politics can't always be serious, right?), spitball a little about the outer limits of possibility and, just maybe, take stock of the political, cultural and media landscape in America right now.

So without further ado, allow us to introduce:

This idea is predicated on one major "If," and I cannot stress that enough: Rep. Beto O'Rourke needs to pull off the upset of 2018 and defeat Sen. Ted Cruz in the Texas Senate election this November. If he does, then it stands to reason that the already-progressive O'Rourke will benefit from having an equally progressive (but geographically diverse) counterpart accompany him on the ticket.

And who would be more fitting in that role than Maryland's accomplished former governor and short-lived 2016 presidential candidate, Martin O'Malley? And I'm not just suggesting this because they both have last names that begin with the letter 'O' (if O'Malley succeeds O'Rourke and we have an 'O' dynasty of Democrats, beginning of course with Barack Obama). It's also because they both have bands!

WHO ARE THEY?
The possible future senator from Texas and the former governor of Maryland. O'Rourke was elected to Congress in 2012 as a so-called New Democrat, meaning a Clinton-style moderate or centrist who still holds progressive enough social views to qualify as a credible Democratic candidate. Before that, O'Rourke served on the El Paso city council. He has not hesitated to call out Cruz on very embarrassing aspects of his past, such as the fact that he "missed half of the votes in the United States Senate" in 2016. "You tell me," O'Rourke has asked, "who can miss half the days of work and still be rehired for the same job going forward? That's not what Texans want."

O'Malley, meanwhile, has a strong progressive record on issues from same-sex marriage (he signed a marriage-equality law in Maryland three years before it became legal nationwide) and environmental protection to opposing the death penalty and protecting immigrants' rights.

WHY O'ROURKE?
If O'Rourke actually beats Cruz, he will immediately become a political superstar. Part of this is because Cruz is a massively unpopular senator, a man so widely perceived as opportunistic and unwilling to work with opponents that even many of his fellow Republicans despise him (seriously). That said, Cruz was also the last non-Trump contender for the 2016 Republican presidential nomination -- and he comes from a deep red state that hasn't supported a Democratic presidential candidate since 1976.

An O'Rourke victory would put Texas in contention regardless of anything else and, more important, would catapult the newly-elected senator to political celebrity status. What's more, considering that Donald Trump had literally no political experience when he was elected, O'Rourke's year and change as senator will be enough to convince many that he has experience enough to be qualified but isn't an "insider."

WHY O'MALLEY?
For one thing, O'Malley has a valid claim to having been treated unfairly during the 2016 Democratic presidential primaries — arguably even more so than Bernie Sanders. He also has a solidly liberal record and a disarming way of presenting his ideas that comes across as reassuring instead of intimidating to potential swing voters. He will also bring geographic balance to the ticket (yes, Maryland is technically below the Mason-Dixon line, but is still a Northeast Corridor blue state, culturally quite different from Texas).

<style="color:#ee2c1d">READ MORE: Psychiatrist Bandy Lee: Trump is getting worse; "I suspect he is unable to tolerate reality"

WHAT’S THEIR CAMPAIGN SLOGAN?
This should be obvious: Something involving an 'O' -- "All Systems O" or "It's O Time!" Hmm. On second thought, they'll probably go with something subtly anti-Trump, yet patriotic and optimistic. Something like "Let's Get America Back on Track!" or "Progress for All Americans!"

WHO WILL VOTE FOR THEM?
The challenge would be drawing out female voters in a political climate where female candidates have a definite advantage. Other than that, they should do fine among the Democratic base. As for independents and moderates, that depends on what O'Rourke can accomplish in his brief time in the Senate before the election. As a Texas Democrat, he's already skilled at pursuing progressive policies without using red-meat rhetoric that might scare away swing voters. If he can pull that off in the Lone Star State, there is no reason to think he can't do it nationwide.

WHO WON'T VOTE FOR THEM?
People who wouldn't vote for a Democratic ticket anyway.

WHAT'S THEIR ACHILLES HEEL?
They would likely be the target of unusually intense vitriol. O'Rourke will already be seen as a giant-slayer for sending Ted Cruz to his political doom. In addition, there's considerable evidence that female voters in the Democratic Party want to elect women, especially faced with President Donald Trump. to be elected to positions of power. Qualified and (reasonably) progressive though they are,  O'Rourke and O'Malley are both white men of Irish descent who don't do much on the diversity front. (It remains true, oddly enough, that there has only been one Roman Catholic president in American history, John F. Kennedy.)

WILL THEY RUN?
O'Rourke has pledged to serve out his entire Senate term if he is elected, which would seem to rule him out. That said, impromptu answers to interviewers on the campaign trail are not legally binding commitments, and let's face it, a lot can happen between now and those early primaries.

WILL THEY WIN??
Very likely. This will be an election in which American voters will want to talk about the economy, which both O'Rourke and O'Malley do quite eloquently. It will also, to be sure, be a referendum on President Donald Trump — and for that to work, you need candidates who (a) don't have skeletons in their closets and (b) can point out the danger of what Trump represents without sounding strident.

It will be important to blame Trump without blaming the people who voted for Trump, and to inspire passion without sounding like you're aping Trump's demagoguery. O'Rourke and O'Malley are ideally poised to do those things — and we'd be saying that even if they didn't have last names that make their potential ticket sound like a match made in alliteration heaven.