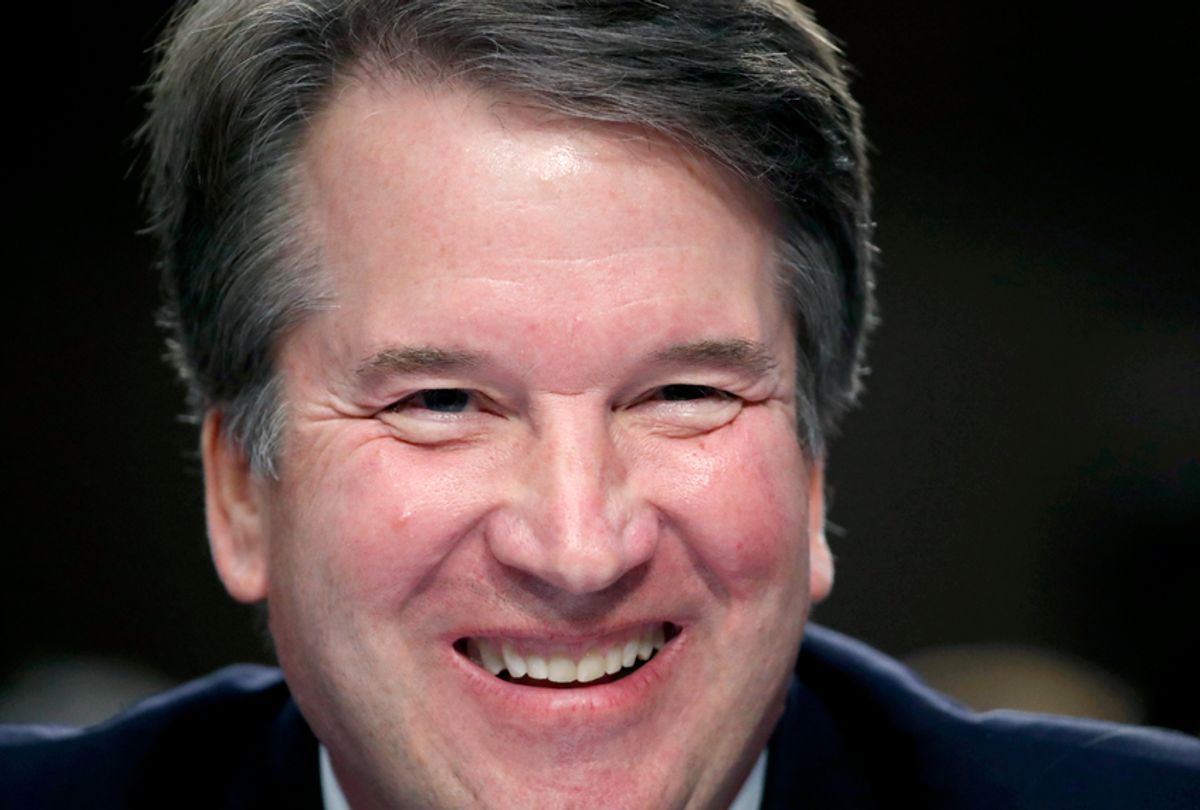 Since President Donald Trump's Supreme Court nominee Brett Kavanaugh offered his fiery testimony before the Senate Judiciary Committee hearing on Thursday, his display of entitlement has become a focal point. He's widely been described as unhinged and belligerent, interrupting senators and accusing the Democrats of constructing a political conspiracy. Only a privileged white man could have acted as such, many of the op-eds that followed Kavanaugh's testimony argued, prompting Sunday's episode of "Fox & Friends" to opt for a different angle.

"Here they are constantly decrying systematic racial profiling of African-Americans when it comes to law enforcement," "Fox & Friends" co-host Rachel Campos-Duffy said, adding that when it comes to Kavanaugh, "They're racially profiling, gender profiling in this case."

Conservative radio host David Webb joined the show, and categorized some of those criticizing Kavanaugh as irrelevant and others, like the Washington Post's Jonathan Capehart, as the "next generation of race pimp."

"The real discussions here should be around the issues," he continued. "Was there, as the allegations assert, an attack, or an incident, or groping, whatever? But that's no longer the issue. This is about the destruction of a man, the destruction of the president's nominee, because the Democrats have no other card left to play. They're losing on the important issues to Americans, so they have to play identity politics, and they have to move that forward."

"And as for Dr. Ford, look — and I believe the judge put it in the right context in his testimony, in his opening statement  to the effect that if she, she may be a victim, but it wasn't him," Webb added. "Whether she's a victim or not, she's a willing participant in this political con, and that's what's being played out on the American people."

But Campos-Duffy wasn't particularly interested in discussing "the issues" or the specifics of the evidence around the sexual assault allegations.

"Well, it's interesting. They keep bringing up white privilege," she said, presumably speaking about Kavanaugh's opponents. "I know they're saying it's male white privilege, but they both grew up in the same privileged D.C. suburbs."

Webb responded that the Democrats have no interest in seriously looking at the allegations or following the line of thinking that allegations are automatically "evidence of guilt," because then they'd have to rethink the party's loyalty to Keith Ellison and Bill Clinton. (Last week, Rep. Keith Ellison, D-Minn. requested that the House Committee on Ethics investigate the allegations that he physically abused an ex-partner. He denies the allegations.)

"But their idea is that the evidence of guilt is the fact that he's a white man of privilege," co-host Pete Hegseth said. "That's the first sin, the first evidence of guilt, and then everything else cascades from there. How do you walk back from that ledge where you start with that premise?"

Webb maintained that Democrats do not have that intention and their outrage is specific to Kavanaugh and his conservative ideologies and that they don't speak to or for the majority of Americans. "They're talking to a very small, but committed base that will go out and magnify this message," he said.