Earhardt: Does it carry any weight? The fact that [Christine Blasey Ford] wasn't sexually assaulted

"She felt like she was going to be, but she wasn't," Ainsley Earhardt said about Ford on "Fox & Friends" Wednesday 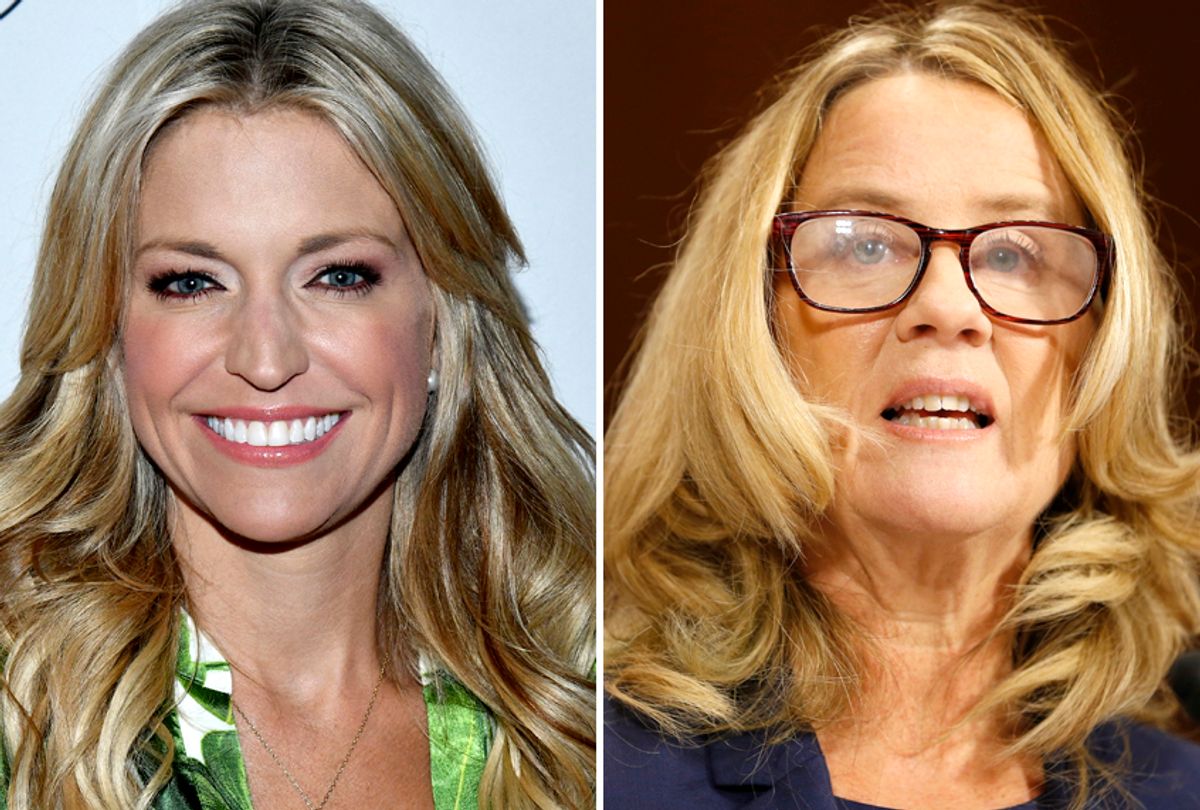 Rachel Mitchell, the special sex crimes prosecutor hired by Republican senators to question Brett Kavanaugh and Dr. Christine Blasey Ford in last week's hearing regarding one of the allegations of sexual misconduct facing President Donald Trump's Supreme Court nominee, later released a memo saying: "I do not think that a reasonable prosecutor would bring this case based on the evidence before the committee."

On "Fox & Friends," co-host Ainsley Earhardt reflected Wednesday on Mitchell's findings and other perceived holes in Ford's testimony. In a peculiar defense, Earhardt questioned whether it mattered that the alleged attempted rape that Ford testified to was not fulfilled. "Does it carry any weight? The fact that she wasn't sexually assaulted," Earhardt asked her guest, the Daily Wire contributor Matt Walsh. "She felt like she was going to be, but she wasn't."

According to the Rape, Abuse & Incest National Network (RAINN), sexual assault can take many forms and "refers to sexual contact or behavior that occurs without explicit consent of the victim," including attempted rape.

But Walsh did not dispute Earhardt's mis-categorization of sexual assault. "Yeah, well, and I think – even beyond that – there's also a lot of holes in the fact that she says she was traumatized, and her grades were suffering and everything. But – yet no one in her family, her parents – no one has come forward to say that there was some change in her demeanor and that she seemed like she was traumatized all those years," Walsh replied. "I think that's a huge hole."

Even beyond the many iterations of sexual assault, Mitchell's memo has been highly contested by industry experts, citing concerns about the prosecutor's objectivity, why she did not question Kavanaugh in the same manner as she did Ford and a lack of an independent investigation into the allegation. Former federal prosecutors in the Southern District of New York found that "worst of all, the Mitchell memo does not even address Kavanaugh’s testimony," according to an analysis for NBC News. "Mitchell does not address Kavanaugh’s evasiveness, his combativeness, his anger, his highly suspect answers to questions about whether he had ever blacked out from drinking or his suspect responses to questions about specific references in his yearbook."

Walsh and Earhardt also clung to Ford's testimony, exclusively, in their discussion of Mitchell's report. "This is a 15-year-old girl that was brutally assaulted. She thought she was going to die. She runs out of the house fearing for her life. That's her story. She goes out the door. She gets into someone's car. By the way, how did she get a hold of that person?" Walsh questioned. "There were no cell phones. She must have gone into the kitchen or something and made a phone call. That part's left out. But, then, she gets into the car with somebody after just suffering this trauma. That person could tell us: What did she look like? Were there any injuries? Was she crying? Did she look like she had been traumatized by something?"

"It's just impossible to believe that a 15 year-old girl, after suffering that experience — if it happened — could have pulled herself together to the point where no one would notice there's something that's wrong," he continued.

Often left out of the discussion of Ford's allegation by right-wing pundits is the fact that Ford has been forthcoming about what she remembers and what she does not remember about the alleged sexual assault from 36 years ago. And despite her imperfect memory – Mitchell acknowledged that "it is common for victims to be uncertain about dates" – Ford has repeatedly called for an FBI investigation so that other potential witnesses could be reviewed and evidence can be examined independently. However, an enraged Kavanaugh refused to offer a similar request before, during or after the special hearing.

"In our experience as prosecutors, the witnesses and defendants who thumped their chest the most were not doing so because they were falsely accused; rather, they were the most likely to be lying," prosecutors wrote for NBC News. "They were relying on passion and emotion — not the facts — to convince others of their truthfulness."