"I know. I did this for 30 years," Pirro said Wednesday while co-hosting "The Five." "I've prosecuted rape cases" 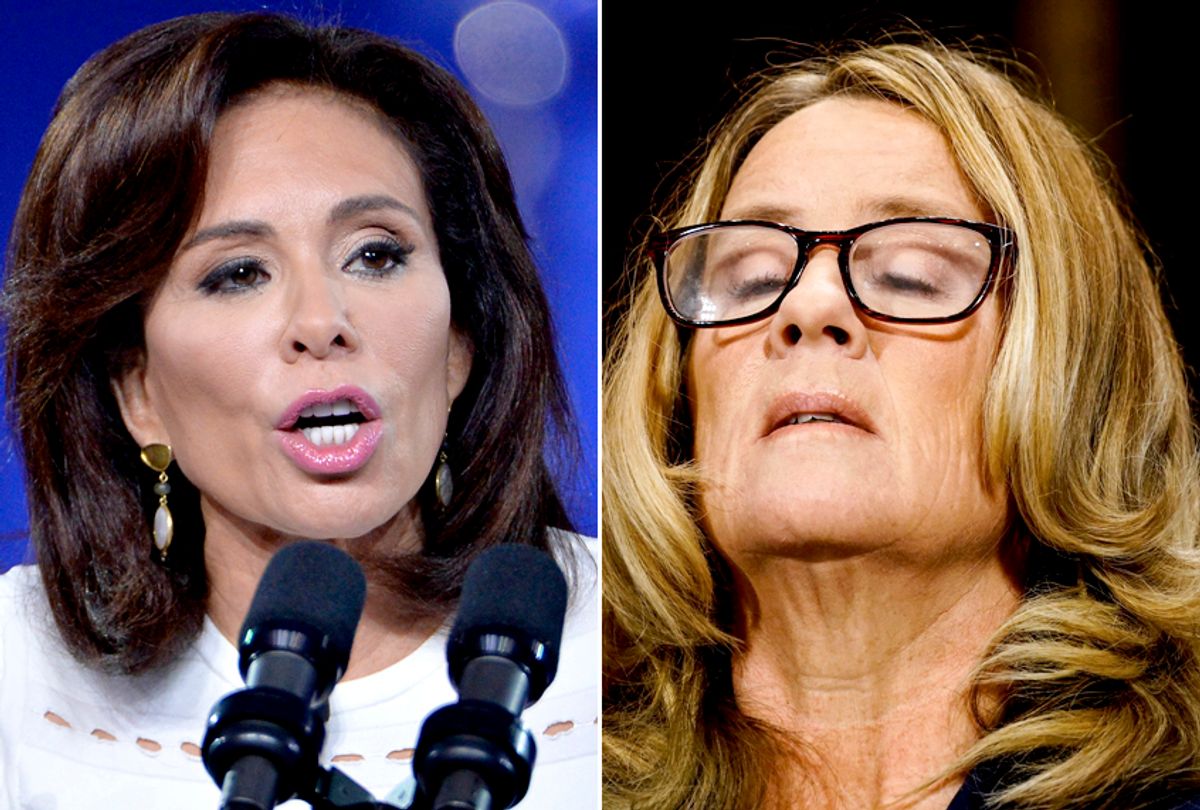 Jeanine Pirro, the Fox News judge whose admiration for Donald Trump knows no bounds, defended the president's attacks of Dr. Christine Blasey Ford by asserting that "every woman in America who has been a victim of sexual assault remembers more" than the accuser of Supreme Court nominee Brett Kavanaugh.

"I know. I did this for 30 years," Pirro said while co-hosting "The Five" on Wednesday. "I've prosecuted rape cases."

Following Pirro's unsubstantiated claim, "The Five" co-host Juan Williams, the lone liberal on the panel who was dismissed as a "snowflake" as he defended Ford, interrupted Pirro to ask if she was, in fact, speaking on behalf of every woman in America.

"No, what I'm telling you is – for you to say, because Donald Trump is pointing out inconsistencies in her own testimony that he is suggesting to other women who have been victimized that – 'Hey, look. We're not going to believe you' – is absolutely not the case," Pirro responded.

However, Pirro did not stop there.

As if in a courtroom, she continued to gnaw away at Ford's testimony as she mounted her defense of Trump. According to Pirro, Ford's inability to remember some of the details about an attempted rape that allegedly occurred in the 1980s deemed her not credible.

But Williams refused to let the president off that easily.

"Here's what I know," he said, "most women who are victimized don't even report it, because they fear this kind of behavior that tells them to shut up."

"How about a sham investigation," Williams asked, referencing the FBI probe of Kavanaugh ordered by the White House, "in which we don't interview the abuser?" (Neither Ford or Kavanaugh were interviewed by the FBI in its probe to verify her claims.)

On "Fox & Friends the next morning, Pirro called "everything" about Dr. Ford's testimony to the Senate Judiciary Committee last week.

Judge Jeanine had a lot to say this morning on @foxandfriends about the FBI report on Kavanaugh, take a look: pic.twitter.com/MQ9fcyyFW9

Unlike Pirro, many of Trump's biggest fans in conservative media conceded Wednesday that he "chose to blow it" by breaking his apparent tactic of "laying low" to make fun of alleged sexual misconduct victim Dr. Christine Blasey Ford, as he challenged his supporters to "think of your son, think of your husband."

“The tactic of the president laying low has been lauded by all sides,” said "Fox & Friends" co-host Brian Kilmeade. His comments marked an unusual break from the unfettered praise Trump is used to receiving from the hosts of his self-proclaimed "favorite" morning show.

Kilmeade's former Fox News colleague Bill O'Reilly, himself the subject of multiple sexual misconduct claims, echoed those sentiments. "Although many people do not believe Christine Ford’s allegations against Brett Kavanaugh, it would be wise for the president and other elected officials to avoid comment on her testimony," he wrote on his website.