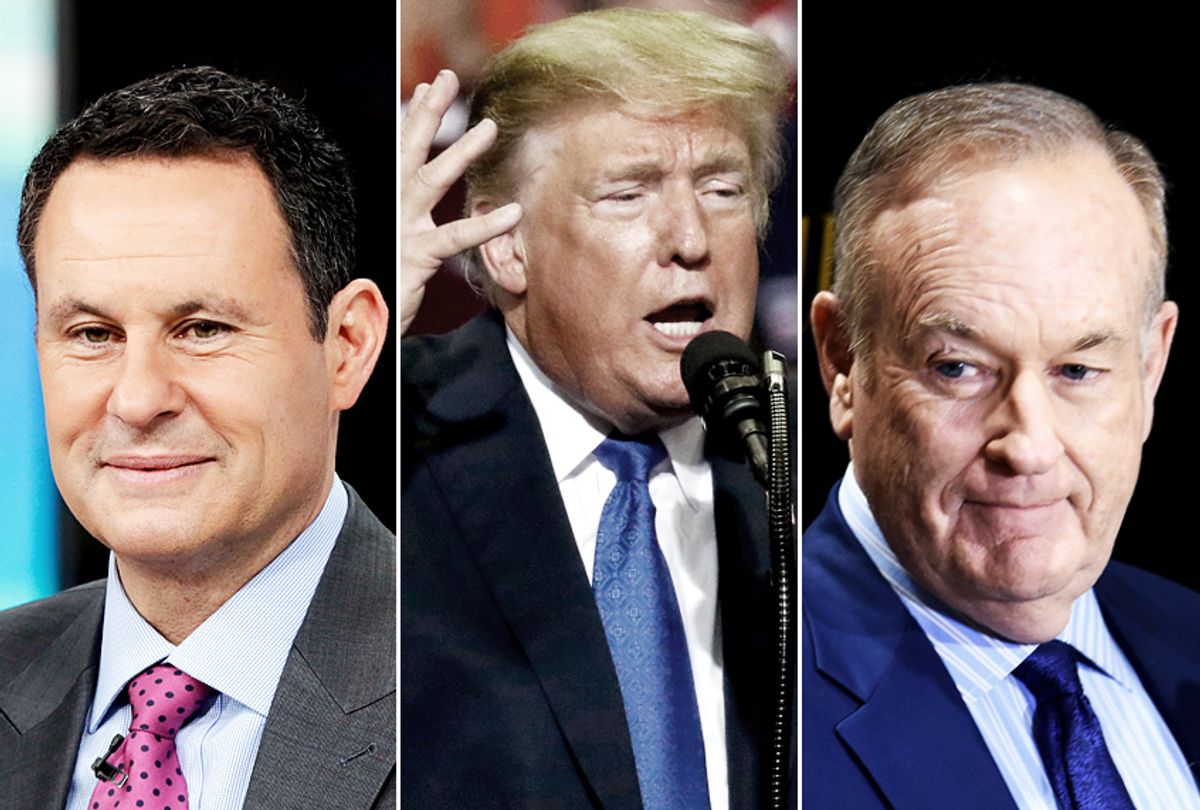 Some of President Donald Trump's biggest fans in conservative media conceded Wednesday that he "chose to blow it" by breaking his apparent tactic of "laying low" to make fun of alleged sexual misconduct victim Dr. Christine Blasey Ford, as he challenged his supporters to "think of your son, think of your husband."

The president's unhinged monologue at a political rally in Southhaven, Mississippi was delivered before the Federal Bureau of Investigation had submitted the results of its probe of Ford's accusations against his nominee to fill the vacant Supreme Court seat, Brett Kavanaugh.

“The tactic of the president laying low has been lauded by all sides,” said "Fox & Friends" co-host Brian Kilmeade. His comments marked an unusual break from the unfettered praise Trump is used to receiving from the hosts of his self-proclaimed "favorite" morning show.

Kilmeade's comments about restraint are also noteworthy as they arrive on the heels of a recent meltdown the anchor had about Kavanaugh following the start of the school year for his two high school-aged children.

“I was at back-to-school night last night for my 10th and 12th grader, and little did I know, I was just trying to see if they had blown any shot at finding any success in life in 10th and 12th Grade," he said. "Because that’s what I’m getting from this whole process. When in doubt, go back to high school and college – even if you’re in your fifties!”

"I've heard of your transcript mattering in 9th Grade for college, but I didn't know your 9th and 10th Grade actions could really reflect on what happens in the Supreme Court," Kilmeade later added after his co-host Ainsley Earhardt had interrupted him to remind him of the severity of Ford's allegations.

In his message of the day posted Wednesday to his website, Kilmeade's former Fox News colleague Bill O'Reilly echoed the same line of reasoning, arguing that disparaging Ford before the facts were fully uncovered was not a wise move.

"Although many people do not believe Christine Ford’s allegations against Brett Kavanaugh, it would be wise for the president and other elected officials to avoid comment on her testimony," O'Reilly wrote.

"Not because of threats from feminist zealots and Kavanaugh haters, which are certainly in play, but because the FBI should be the final word. Also, by diminishing Dr. Ford publicly, she gains sympathy from folks who may be undecided about her allegations," O'Reilly continued. "Some believe that Judge Kavanaugh is, himself, being victimized and the upcoming FBI report might solidify that feeling. But it might not."

O'Reilly's criticisms are notable given that he was fired after a New York Times expose had revealed that about $13 million in settlements had been handed out as accusations of sexual misconduct and other inappropriate behavior mounted. “Just like other prominent and controversial people, I’m vulnerable to lawsuits from individuals who want me to pay them to avoid negative publicity," O'Reilly then said.

When news of an alleged $32 million settlement later broke in the times, he dismissed it as "an attack on me for political purposes" in a tweet. As Salon's Taylor Link wrote at the time, "The fired Fox News anchor hasn't handled the latest news surrounding him with anything that could be mistaken for dignity."

In his takedown of Ford, Trump seemed to suggest that the psychologist had not been forthcoming about how much she had to drink on the night she alleges Kavanaugh sexually assaulted her in an attempted rape. Here is his extended rant:

Trump ended his comments by repeating his claim that men are the real victims of the #MeToo movement. "And a man's life is in tatters," he said of Kavanaugh. "A man's life is shattered."
And those remarks also did not sit with at least two key voting members of his own Republican Party. “The president’s comments were just plain wrong," Maine Senator Susan Collins said when asked directly about Trump.
Jeff Flake, the retiring Arizona senator who last week sided with Democrats in delaying a floor vote until an FBI investigation had taken place, called Trump's words "appalling."
"There’s no time and no place for remarks like that," Flake said Wednesday on NBC's "Today Show."
"To discuss something this sensitive at a political rally is just not right."