Kelly: "Believe women" is "inconsistent with the fundamental principles of our judicial system" 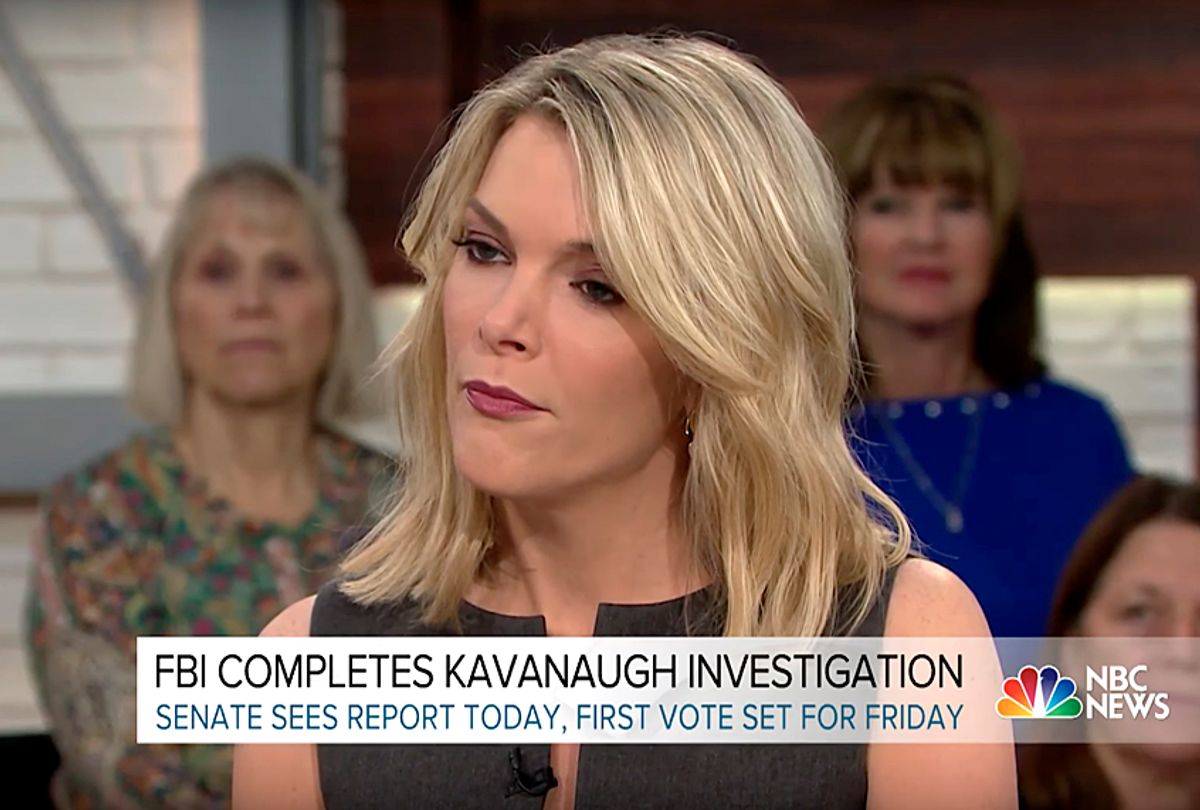 Megyn Kelly, the former Fox News star who now hosts the third hour of NBC News' "Today Show," proclaimed on air Thursday that slogan "believe women" may "sound nice," but it is "utterly inconsistent with the fundamental principles of our justice system – utterly inconsistent."

During a panel discussion on "Megyn Kelly TODAY" about the accusations of sexual misconduct facing Supreme Court nominee Brett Kavanaugh, the NBC anchor warned women "to be careful" with such claims. "If there is a presumption of guilty in all cases, how are we going to get people to listen to us?" she asked.

Amy Holmes, a conservative pundit, echoed Kelly's remarks. "We've seen it on college campuses based on anecdotal evidence," she said. "That's the racial angle. And on college campuses – disproportionately – young men of color are accused of these crimes and then are put in a situation where they can't defend themselves. So we need to be very careful about how we walk down this road."

“They don’t have a right to see emails, for example, that a woman has sent, maybe saying it was consensual,” she continued. “They don’t have that right – or they didn’t under President Obama.”

However, a fact-check by Raw Story's David Edwards later de-bunked Kelly's claims. "In fact, the Obama administration did put into place rules for colleges to protect the rights of the accuser. Those rules have been rescinded by the Trump administration," Edwards wrote. "However, men charged with sexual assault crimes did not lose their due process rights in a court of law as a result of the Obama-era rules."

Earlier in her show, Kelly stated that "women are entitled to an open mind and a fair hearing – not to a presumption that their accusations are true. Men get due process, as well."

Kelly also accused Democrats of "trying to maneuver Dr. Ford and others as political weapons" in a string of pointed comments that more closely resembled the tone of her right-of-center Fox News primetime show than the historically centrist one of "Today." As further evidence, the NBC anchor challenged former President Barack Obama's education secretary to a debate her on air.

Kelly's comments stand in striking contrast to the ones she made to Us Weekly in a story published Thursday. In an interview, the NBC anchor claimed that she felt "very strongly about the #MeToo coverage."

Kelly also hinted that she may know more about sexual misconduct allegations against former "Today" co-host Matt Lauer. When asked if she could see Lauer returning to the screen, Kelly replied: "I know too much that others don't know."

Lauer was fired by NBC News late last year after over allegations of sexual misconduct. After the claims against the veteran anchor were revealed, Kelly interviewed one of his accusers, the former "Today Show" production assistant Addie Zindone, on her show. The two discussed Zindone's alleged relationship with Lauer, which she alleges took place when she was 24 years old.

The NBC anchor also told Us Weekly that men who were in "immense positions of power" before toppled by the #MeToo reckoning need to learn from their past behavior. "I think these guys who want to completely skirt around it and just reappear and re-emerge in their old roles are kidding themselves," she said. "Women are feeling too empowered to allow that. They don't want to just see punishment – they want to see that you get it."