Stevens said he long admired Kavanaugh, but "his performance during the hearings caused me to change my mind" 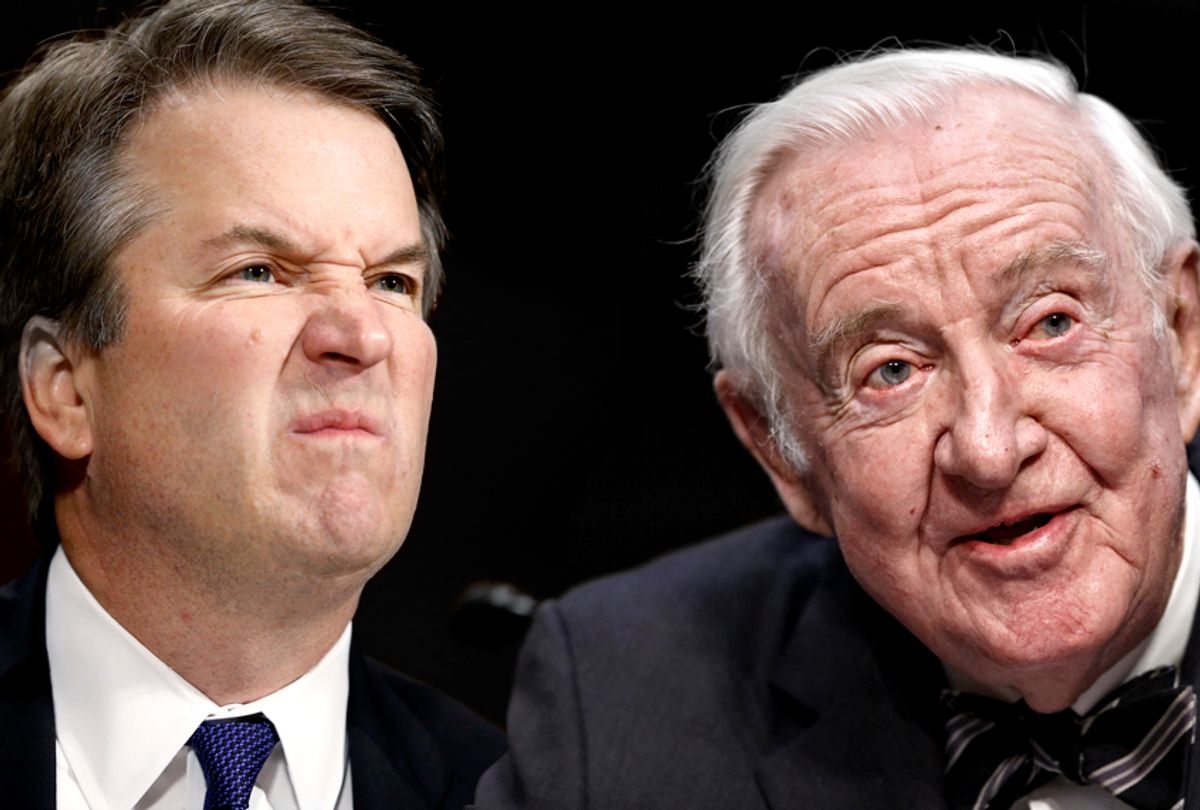 Retired Supreme Court Justice John Paul Stevens said on Thursday that Judge Brett Kavanaugh should not be confirmed to the high court.

Stevens spoke to a crowd of retirees in Boca Raton, adding that while he had long admired Kavanaugh's judicial record, his behavior during the special hearing last week revealed biases that would significantly limit his abilities as a Supreme Court justice.

Justice Stevens, 98, said this belief marked a real shift for him because he had been confident that Kavanaugh possessed "the qualifications to sit on the Supreme Court and should be confirmed if he was ever selected."

"But I've changed my views for reasons that have no relationship to his intellectual ability or his record as a federal judge. . . But I think that his performance during the hearings caused me to change my mind."

Stevens cited critiques from prominent commentators, such as constitutional Harvard Law professor Laurence Tribe, who wrote an op-ed in the New York Times on Monday that addressed the myriad cases Kavanaugh would have to recuse himself from, given his highly partisan attacks in front of the Senate Judiciary Committee and in front of the nation.

"They suggest that he has demonstrated a potential bias involving enough potential litigants before the court that he would not be able to perform his full responsibilities," Justice Stevens summarized. "And I think there is merit in that criticism and that the senators should really pay attention to it."

He added, "For the good of the court, it’s not healthy to get a new justice that can only do a part-time job."

While the debate has raged across the country over the validity of the sexual misconduct allegations against Kavanaugh, and especially the credibility of Dr. Christine Blasey Ford's testimony, who spoke before the Senate Judiciary Committee last week, and described the lasting effects the alleged attempted rape 36 years ago by Kavanaugh has had on her life. Yet whether one believed Ford or Kavanaugh, who categorically denies the sexual assault allegations against him, the Supreme Court nominee's political framing of the accusations raised serious questions about his temperament and impartiality.

"This whole two-week effort has been a calculated and orchestrated political hit fueled with apparent pent-up anger about President Trump and the 2016 election, fear that has been unfairly stoked about my judicial record, revenge on behalf of the Clintons and millions of dollars in money from outside left-wing opposition groups," Kavanaugh said in his opening statement.

Kavanaugh's hysterical and partisan display at the hearings last week has been such a point of contention that he penned an op-ed, which was published in the Wall Street Journal Thursday night, titled "I Am An Independent, Impartial Judge."

"I was very emotional last Thursday, more so than I have ever been," Kavanaugh wrote. "I might have been too emotional at times. I know that my tone was sharp, and I said a few things I should not have said. I hope everyone can understand that I was there as a son, husband and dad."

Justice Stevens was appointed to the Supreme Court in 1975 by President Gerald Ford and retired in 2010. Even though he was nominated by a Republican president, Justice Stevens often sided with the court's liberal wing.

Justice Stevens said he highlighted one of Kavanaugh's opinions in his book, "Six Amendments," in which he recommends changes to the Constitution. One proposed amendment is a reversal of the Citizens United campaign finance decision, allowing unlimited political contributions to a candidate — a ruling Justice Stevens had dissented. In his book, he cited a decision from Kavanaugh who ruled against two foreign citizens, temporarily living and working in the U.S., who wanted to contribute money to American politicians and political parties.

"I thought he wrote a very persuasive opinion," Justice Stevens said, "and as a matter of fact, I put his picture in the book to illustrate my admiration for it."

"He's a fine federal judge, and he should have been confirmed when he was nominated," Justice Stevens said — that is, prior to the politically-charged statements Kavanaugh made at the special hearing last week.

Justice Stevens disputed the notion that the ordeal mirrors that of Justice Clarence Thomas' confirmation process in 1991, which became especially polarizing after he was accused of sexual harassment by Anita Hill.

"There's a lot of differences between that," Stevens said. "First of all, there's nothing that Clarence did in the hearings that disqualified him from sitting in cases after he came on the court."

"I disagreed with him on most of his important rulings. But as a person, I'm very fond of him," he added, describing Justice Thomas as "decent" and a "likable person."

"You cannot help by like Clarence Thomas," Stevens added, "which I don't think necessarily would be true of this particular nominee."