When a guest on her show resurfaced Trump's Charlottesville comments, Ingraham said, "what he was trying to say..." 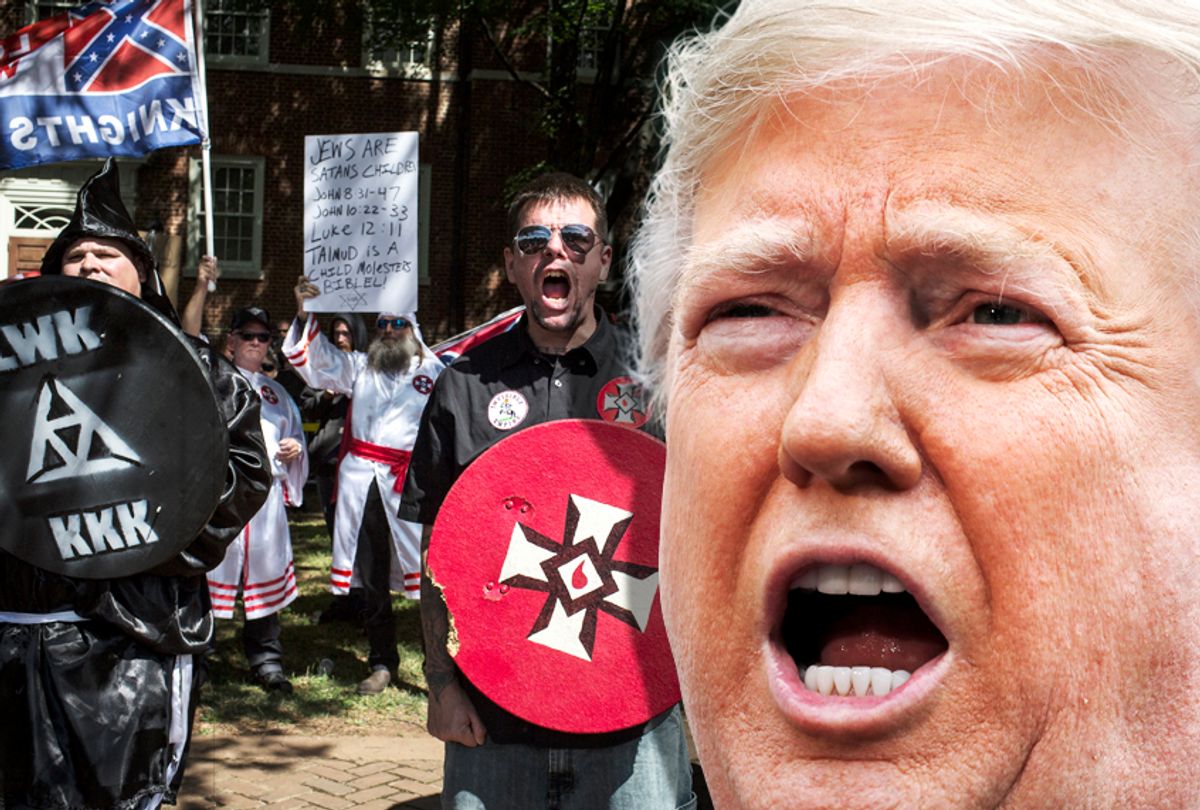 "Do you have amnesia?" Democratic strategist Scott Bolden asked Laura Ingraham on her show Tuesday night.

The Fox News host had incredulously questioned why Democrats quelled protests against the confirmation of Justice Brett Kavanaugh, who's been accused by multiple women of sexual assault.

Bolden reminded the Fox News host of "The Ingraham Angle" that when former president Barack Obama was in office, the right fought against his every move for eight years

"They're protesting how the meetings and how the hearings on Kavanaugh were held and the fact that truth wasn't the motivation," Bolden continued, but instead, "to plow right through," and to get him confirmed, in the words of Senate Majority leader Mitch McConnell.

"They have a right to be angry. Millions of women suffering in silence, are you all not seeing that?" the strategist questioned. "And by the way, your titular head of the GOP, the president of the United States is not only the most divisive — but his unhinged statements — his statements about Nazis being decent people, him taking and ordering babies [be] taken from immigrants..."

Ingraham cut Bolden off. "No, that's not, that's not what he said," the Fox News host interjected.

"That's exactly what he said," Bolden responded, referring to President Trump's highly controversial remarks after the violence in Charlottesville last year. "He said there are good people on both sides."

Ingraham tried a different approach. "No, I think what he was trying to say," she said.

Clearly flustered, Ingraham changed course. "I understand what you're trying to do," she said. "I'm actually trying to do an intervention for the Democrats."

In the days following the violent white nationalist rally in Charlottesville in August 2017, where counter-protestor Heather Heyer was killed, Trump showed strong resistance to condemn those responsible.

His first statement emphasized a lie that there was violence "on many sides." "We condemn in the strongest possible terms this egregious display of hatred, bigotry and violence on many sides, on many sides," Trump said.

The president's words were met with anger and scrutiny, which compelled him to try again. "Racism is evil," Trump said from the White House. "And those who cause violence in its name are criminals and thugs, including the KKK, neo-Nazis, white supremacists, and other hate groups that are repugnant to everything we hold dear as Americans."

But then, the next day, during an impromptu press conference at Trump Tower, Trump walked back to his original remark, not only blaming "both sides," but equating the counter-protestors with the white nationalists.

"But you also had people that were very fine people, on both sides," he continued. "You had people in that group that were there to protest the taking down of, to them, a very, very important statue and the renaming of a park from Robert E. Lee to another name."

The backlash was intense, and it was unclear how Trump would recover, as Republicans sought to distance themselves from him and his statements. But he did. The fury died down. Yet as Bolden made clear to Ingraham, the idea that Trump doesn't traffic in divisiveness is utterly dishonest.