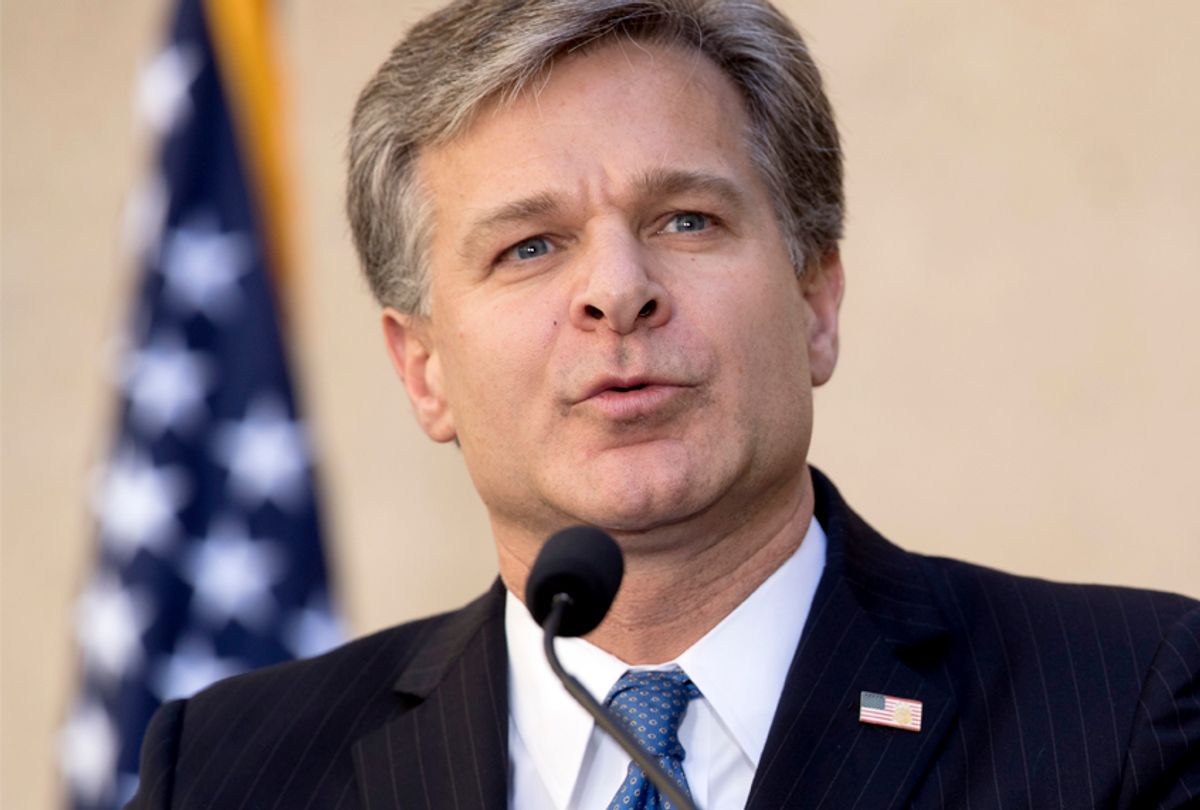 FBI Director Christopher Wray told senators Wednesday that the White House limited the scope of the supplemental investigation into sexual misconduct allegations facing newly-confirmed Supreme Court Associate Justice Brett Kavanaugh. However, he contends that the process used was not out of the ordinary.

The bureau's director revealed to Sen. Kamala Harris (D-Calif.) that the White House – and not the Senate – had indeed ordered the probe in response to a question about process. He confirmed that launching a background investigation into judicial nominees is ordered by the adjudicating agent, which in this case was 160o Pennsylvania Avenue.

"In this situation, was your direction limited in scope?" Harris asked the FBI director. "Or were you given full discretion to investigate whatever your agency thought was appropriate to figure out what happened?"

"Our investigation here – our supplemental update to the previous background investigation – was limited in scope," Wray responded. However, he added that the limits were "consistent with the standard process for such investigations going back quite a long ways."

Wray's admission appears to contradict White House claims that Congress had managed the probe. During a Rose Garden press conference on Oct. 1, President Donald Trump denied reports that his White House had applied limitations to the FBI's investigation into Kavanaugh. He also added that he had set the scope of the investigation based upon a request from Senate Republicans.

"I'm guided by the Senate," Trump said. "I want to make the Senate happy, because, ultimately, they're making the judgement."

While he acknowledged that "it is up to me" to set the probe's boundaries or remove its limitations, he added, "I'm instructing them as per what I feel the Senate wants."

Sen. Jeff Flake (R-Ariz.), whose decision to join Democrats in requesting the probe forced a one-week delay on a floor vote on Kavanaugh's confirmation, called for a "fulsome investigation" into the misconduct claims against Kavanaugh.

"It does no good to have an investigation that just gives us more cover, for example," he said. "We actually need to find out what we can find out. And we have to realize that we may not be able to find out everything that happened. This is something that was a while ago. Some witnesses or potential witnesses may not want to cooperate. But, for those that can and those who we can compel to cooperate, we've got to do a fulsome investigation."

Democrats slammed the scope and length of the investigation after the White House and Senate Republicans announced it had "found no hint of misconduct." The FBI concluded its investigation after four days, without interviewing two of the three women who accused Kavanaugh of sexual misconduct or dozens of people who went to high school and college with Kavanaugh and reportedly had corroborating information. Several key people were not interviewed, including Kavanaugh himself. Dr. Christine Blasey Ford, who testified to the Senate Judiciary Committee that Kavanaugh attempted to rape her in the 1980s, was also not questioned.

Kavanaugh was confirmed by the Senate on Saturday as the 114th justice of the Supreme Court. The final tally was 50-48 in favor of confirmation and broke almost entirely along party lines. He was sworn in that evening in a "private ceremony" in the Supreme Court building.