“Usually when she opens her mouth, respectfully, she offends at least one half of the country” 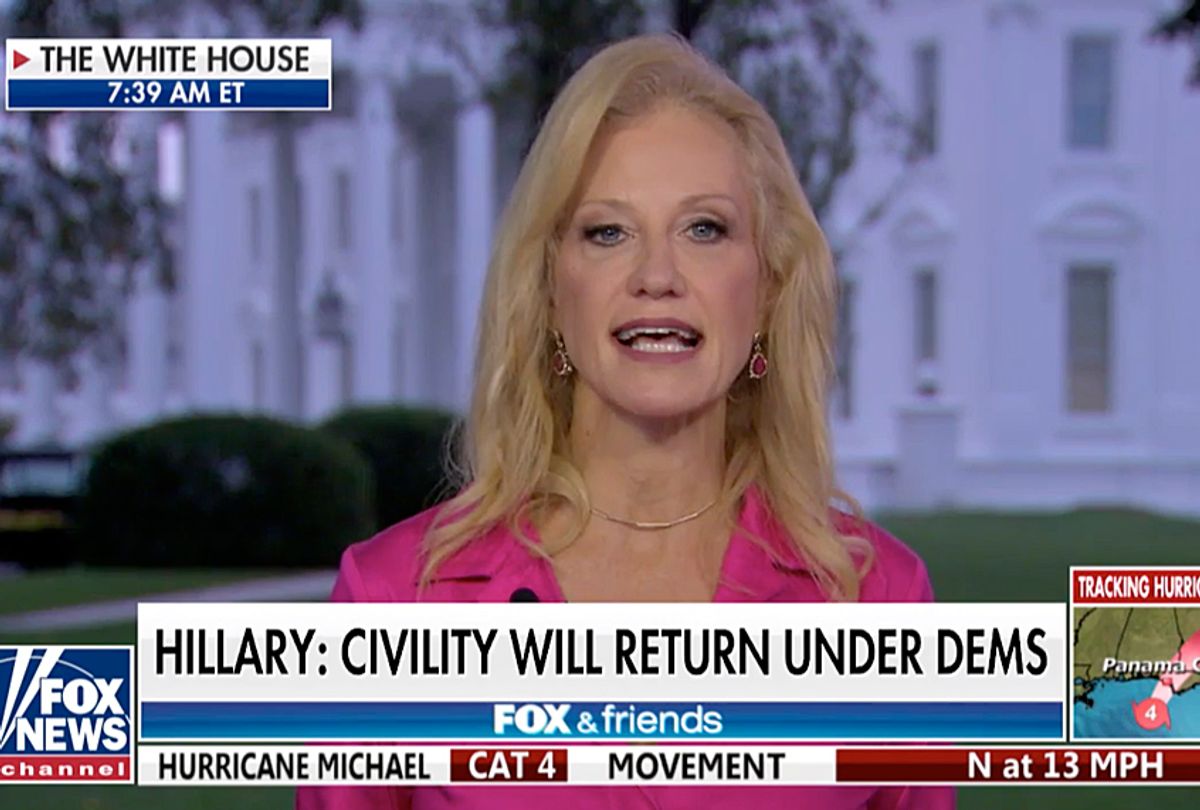 Counselor to the president Kellyanne Conway unloaded on her boss' 2016 Democratic challenger Wednesday morning on Fox News, sounding alarm bells that Hillary Clinton's recent comments urging her party to chose strength over civility were "not just unfortunate and graceless" but also "dangerous."

“Usually, when she opens her mouth respectfully, she offends at least one half of the country," Conway said during an appearance on "Fox & Friends" on Wednesday. "And she did it again, but I think her discourse now is a little bit dangerous.”

Clinton suggested in a recent interview with Christiane Amanpour that Democrats adopt the more forceful tactics of the GOP, which she described as "an ideological party that is driven by the lust for power," until they can regain a majority in one house of Congress.

"You cannot be civil with a political party that wants to destroy what you stand for, what you care about," the former secretary of state said on CNN. "That's why I believe – if we are fortunate enough to win back the House and or the Senate –  that's when civility can start again. But until then, the only thing that the Republicans seem to recognize and respect is strength."

Conway categorically refuted Clinton's remarks, in part by claiming that she herself does not like "that kind of talk" and she avoids it. Nevertheless, in the same breath, Conway managed to lob personal attacks at Clinton's education, marriage and failed presidential campaign.

"I don't like the implications there," Conway said in response. "It’s one thing to call us deplorable, irredeemable, laugh at people who don’t have all the privileges that she has had with her Ivy League law degree and through her marriage to a much more popular man, who was actually was a two-term president that she’ll never be."

The counselor to the president then made the false claim that President Donald Trump has been the poster boy for civility in politics. "My boss has called for civility – he's said that he represents all Americans," she said. "We don't run around asking people what party affiliation is when he's cutting their taxes and allowing their small businesses to be free of regulations . . . We're impervious to that."

Many critics, however, point to Trump's personal Twitter account, which features near daily personal insults, the nickname "Crooked Hillary" for Clinton included, and has led to th further erosion of discourse in politics. Trump has also flagrantly flirted with white nationalists. After the deadly Charlottesville rally, he infamously blamed violence "on both sides." He began his presidential campaign by calling Mexicans "murderers" and "rapists and first entered the national political scene as the mouthpiece for the "birther" movement as he lobbed racist attacks at former President Barack Obama. These examples do not even scratch the surface of the presidential norms on civility that he has broken, including making threats against the free press and political foes.

Conway concluded her thoughts on Clinton Wednesday by bringing up that she does not “see all these Democratic candidates banging down Hillary Clinton’s door asking her to lock arms" as the 2018 midterm elections heat up. “I think it’s not just unfortunate and graceless, but a little bit dangerous," she added. "And I would ask her to check that."