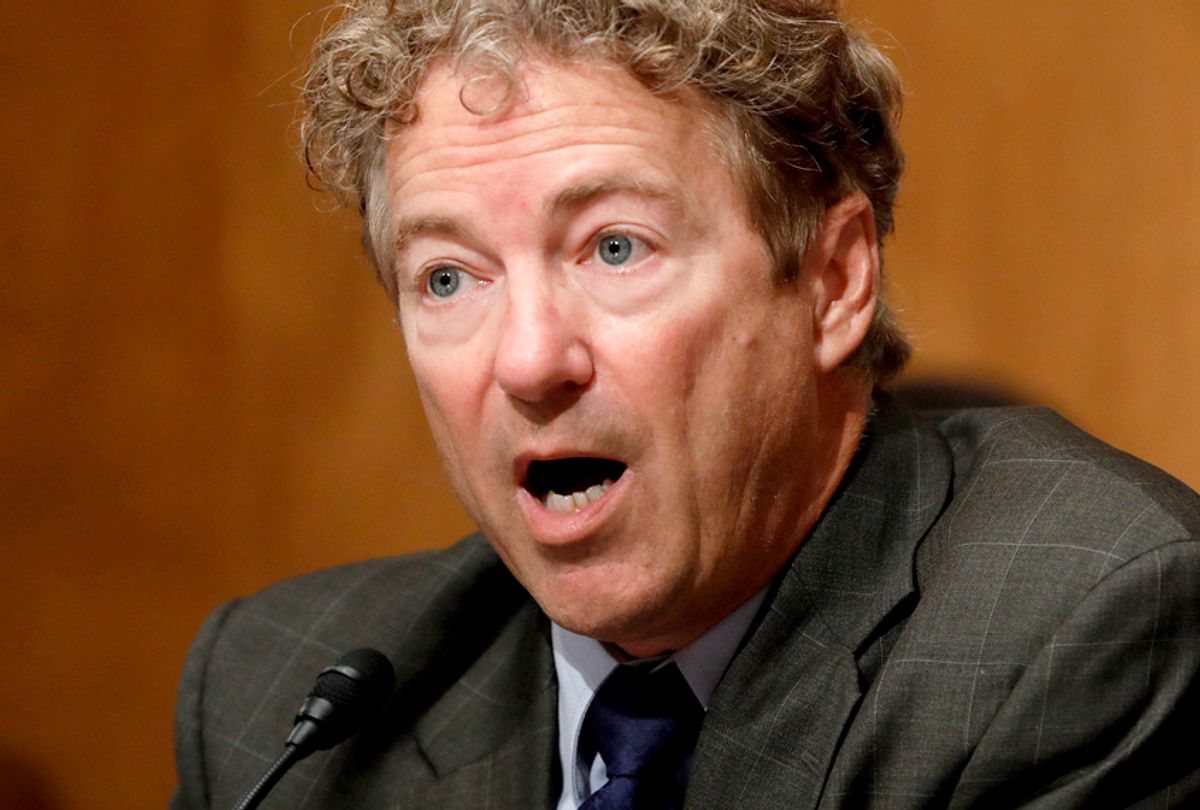 Republican Senator Rand Paul of Kentucky is making the round on right-wing media to argue that "rhetoric on the left" is inciting politically motivated violence.

During a Wednesday morning appearance on "Fox & Friends," the Kentucky senator pointed to an incident last year in which Republican lawmakers, including Paul, were attacked by a gunman while practicing baseball in Alexandria, Virginia.

"What happens when Democrats say 'get up in their face'? They need to realize there are a lot of unstable people out there. There are people with anger issues. There are people who are prone to violence," Paul told co-hosts Steve Doocy, Brian Kilmeade and Ainsley Earhardt.

"There are people who might even live next to you," he continued, referencing the time he was attacked by his neighbor. "You don't know where these people are."

The lawmaker criticized Sen. Cory Booker, D-N.J., who advised activists in July to confront Republican lawmakers to "tell them about common sense solutions."

"We've asked Cory Booker to retract those words. We've asked the Democrats, in general, to ratchet it down and say, 'look we want peaceful dialogue,'" Paul said, adding that he "heard indirectly that Booker didn't intend to incite violence."

Booker's comments came under intense scrutiny among conservatives, as they followed remarks from Rep. Maxine Waters, D-Calif., who faced intense backlash for urging her supporters to confront Trump administration members in public. Many Republicans slammed Booker and Waters' comments as "dangerous" and overly aggressive.

"I take he meant his word on that," Paul admitted. "I don't think his intention is to call people to be violent. But getting up in someone's face really kind of does sound like you want them to get nose-to-nose with them, and the problem is rational people might back down but what's going to happen when the guy comes with a gun to a rally or comes with a knife to a rally? There is going to be an assassination if this doesn't ratchet down, and I think the other side needs to really calm the rhetoric down."

The senator made similar remarks on Tuesday during a radio interview with Kentucky host Leland Conway.

"I really worry that someone is going to be killed and that those who are ratcheting up the conversation," Paul told Conway. "They have to realize that they bear some responsibility if this elevates to violence."

He, again, highlighted the incident last summer in which GOP lawmakers were attacked by a gunman while practicing baseball, as well as the time his neighbor assaulted him at his home in Kentucky. He also pointed fingers at Booker.

"I think what people need to realize is when people like Cory Booker say 'get up in their face,' he may think that that's okay, but what he doesn't realize is that for about every 1,000 people who might want to get up in your face, one of them is going to be unstable enough to commit violence," Paul said.

Paul's remarks that he's worried about politically motivated killings in the United States incited swift backlash from pundits and political observers on social media, who pointed out that several people have already lost their lives to political divisions.

It seems that Paul also forgot about the ugly scene that took place outside the Kentucky Senatorial debate in 2010, where he faced off against Democrat Jack Conway. At the time, a volunteer for his Senate campaign was captured on video literally stomping the head of a member of the progressive organization MoveOn. The MoveOn volunteer, Lauren Valle, went to the hospital that night and filed an assault report.

A local CNN affiliated reported that a second assault was filed that night before the debate by a female Paul supporter who claimed that a Conway supporter stepped on her foot. In that case, however, the victim said was "unsure if it was purposeful or accidental."