"Fox & Friends" hosts claim Stahl pushed an agenda by bringing up global warming, even though it is scientific fact 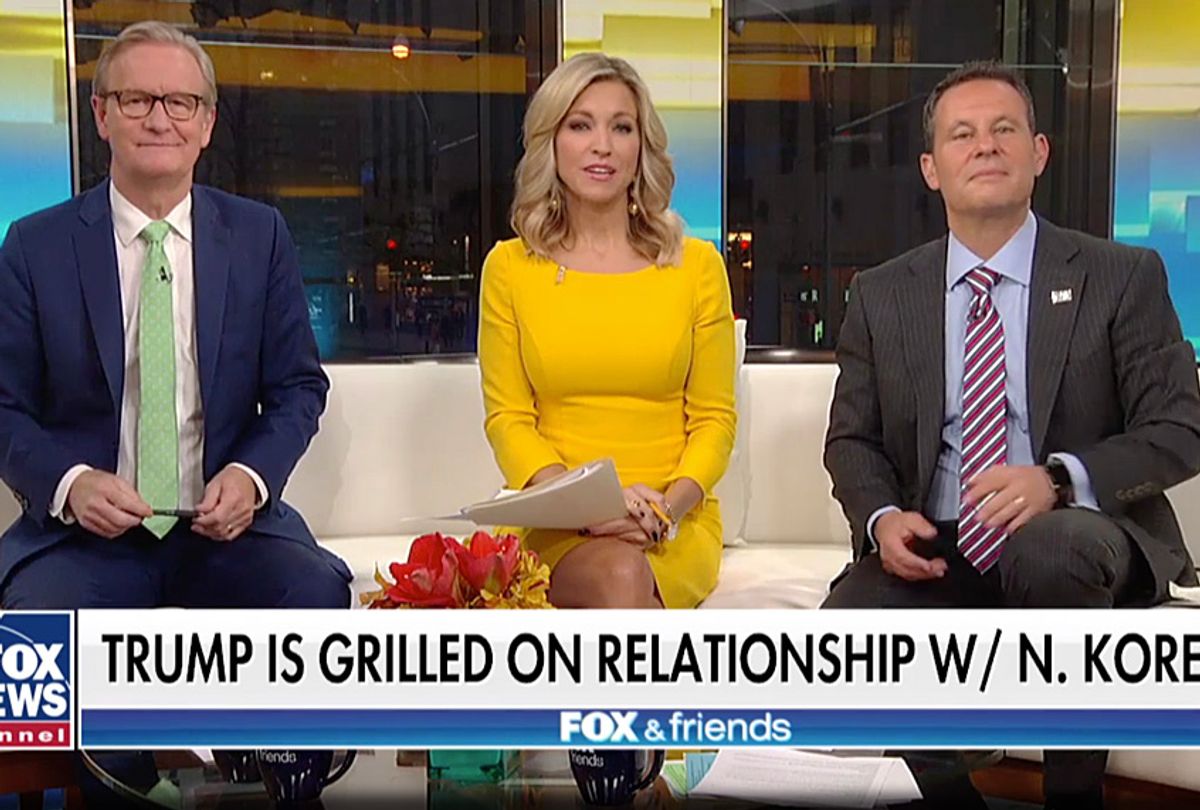 "You saw Donald Trump's first interview since he became president of the United States," co-host Steve Doocy told the audience Monday. "They aired about 30 minutes. It was contentious, it was back and forth. For instance, it started with video of the hurricane that devastated parts of the panhandle of Florida. And the first question – it wasn't about federal response. It wasn't about emergency preparedness. It was about global climate change."

The argument made by the "Fox & Friends" hosts was that Stahl had somehow behaved inappropriately by pushing an alleged "agenda," even though global warming is a proven scientific fact. After co-host Ainsley Earhardt pointed out that there were "lots of good things" about the interview – and rattled off a list of topics that were covered – co-host Brian Kilmeade chimed in by questioning Stahl's motives for bringing up global warming during her conversation with Trump about Hurricane Michael. "We start talking about climate change," he said. "And, if you listen close, you can hear an agenda."

"She really believes in global warming – and that's fine. And man's role in climate change – and that's OK. But, I don't think you should bring your point of view. She was trying to win over the president with her point of view . . ." Kilmeade continued. He later complained that Stahl had brought up "scientists this, scientists that. There's other scientists who say it: Something's going on out there. The role of man has not been unveiled to a way in which the president accepts. Same way, Marco Rubio answered very similarly in similar questions."

In fact, an overwhelming majority of scientists agree that global warming has been caused by human emissions of fossil fuels.

The "Fox & Friends" hosts also complained about Stahl's general demeanor toward Trump, with Earhardt claiming that "she does interrupt him a lot. And people – many Republicans thought it was disrespectful and obnoxious. Many people thought it made him look better, because he did answer everything correctly."

The hosts also interviewed White House counselor Kellyanne Conway, who concluded that "it was a fantastic interview. I call this entire media barrage by President Trump: 'Donald Trump in full.' It's part of why he got elected."

Doocy praised the president's performance to Conway, alleging that Stahl was "trying to do a regular '60 Minutes' interview. But, you know, your boss wasn't having any of it." He then asked Conway if Trump believed it was a good interview and had been fairly edited.

"He knows it was an excellent interview, because he got to express directly to the American people without the middle man — the way he does on his social media platforms, the way he does in these increasing print and TV interviews, the pool sprays obviously out on the South Lawn, the rallies three or four or five rallies a week now. This is the most accountable, transparent president, perhaps, we've ever seen – definitely in modern times," Conway told Doocy. "He doesn't fear the media. He uses the media as a platform – one of many platforms by which to communicate his message."

However, Conway did claim that the president "also has said that he thought that, after he got elected, the press would become more fair" – and was upset that had not yet happened.

"Fox & Friends" did have to draw the line at one point, though. After Earhardt tweeted that "President Trump peppered endlessly with questions in an interview with ’60 Minutes'" and was met with sarcastic horror from commenters who noted that is precisely what an interviewee is supposed to do, the tweet was taken down, according to The Washington Post.