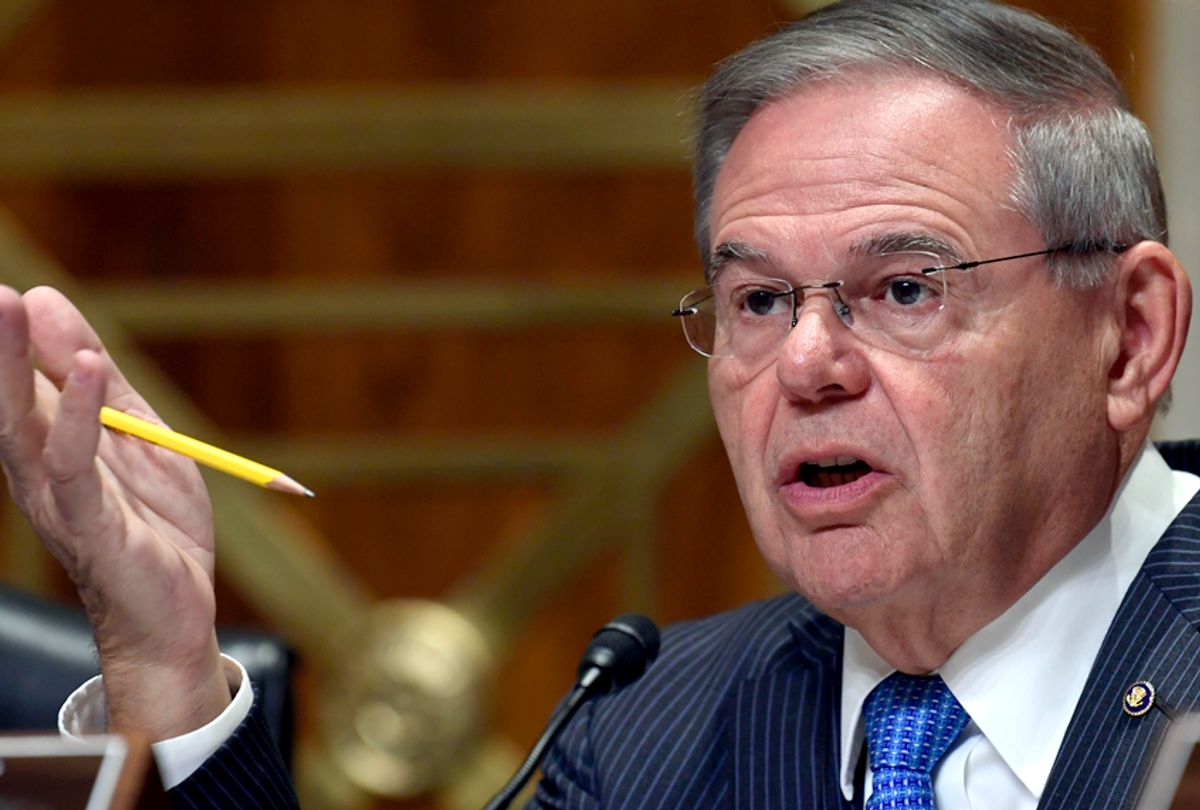 Republican Senate candidate Bob Hugin has begun airing a commercial that resurfaces six-year-old allegations that Sen. Bob Menendez (D-N.J.) had sex with underage prostitutes in the Dominican Republic during trips with a friend and campaign donor, Dr. Salomon Melgen.

The allegations — which first made the media rounds during Menendez's 2012 reelection campaign and later resurfaced after he became chairman of the Senate Foreign Relations Committee — were found to be unsubstantiated. A video of claims made by women whose faces were obscured was published on the conservative website The Daily Caller. The site reported that "the two women said they met Menendez around Easter at Casa de Campo, an expensive 7,000-acre resort in the Dominican Republic. . . . They claimed Menendez agreed to pay them $500 for sex acts, but in the end they each received only $100."

The three alleged accusers later retracted their claims, telling Dominican police they were paid to falsely claim that they had sex with Menendez for money. However, The Daily Caller has not removed the article.

But in the era of #MeToo Movement, Hugin is attempting to turn Menendez's words on the Senate floor that "women should be believed" against him.

"When will we as a society begin to believe women? To trust women," Menendez says in a clip used in the commercial, which shows him speaking on the Senate floor against Supreme Court Justice Brett Kavanaugh, who was accused of sexual misconduct.

The ad calls Menendez a "hypocrite," because he said he believed Kavanaugh's accuser, university professor Dr. Christine Blasey Ford but not the underage girls who alleged they slept with him. The commercial then details the allegations that were made against Menendez.

"Shame on those who question why a teenager living in the Dominican Republic would be afraid to publicly accuse a sitting United States senator and, arguably, the most powerful and connected businessman on the island," Hugin communications director Megan Piwowar said in a statement.

"It is clear that Bob Hugin will say, do and spend whatever he wants to try to deceive New Jersey voters and buy a Senate seat. This is a disgraceful act by a desperate man. They are lies and he knows it," Sandberg said in a statement. "While it should come as no surprise to anyone that a greedy drug company CEO who preyed on the sick and suffering to get rich would stoop this low, this act in and of itself proves Bob Hugin lacks the integrity, fitness and moral character to serve in the U.S. Senate."

Menendez, who survived a six-week corruption trial involving his friendship with Melgen late last year after the jury deadlocked, was never charged with a crime involving prostitution. The allegations were made in the Dominican Republic through an anonymous tipster using the name "Pete Williams," who sent emails to the watchdog group Citizens for Responsibility and Ethics in Washington and later to the FBI. The tipster's name is an apparent to Harrison "Pete" Williams, a former New Jersey senator who resigned after being convicted of bribery.

The allegations caused investigators to probe Menendez's relationship with Melgen. The ultimately unsuccessful indictment against the two men alleged that the senator had received six-figure campaign contributions, luxurious gifts and vacation from Melgen in exchange for intervening with the government on his behalf. Melgen was later convicted of Medicare fraud in a separate case.

Menendez has vehemently denied the claims he traveled to the Dominican Republic for trysts with underage prostitutes. But, in the attack ad, the Hugin campaign claims federal prosecutors were able to confirm the claims as "specific, corroborated allegations." The Hugin campaign also claimed that the underage prostitutes in the FBI agent's affidavit are not the same ones who retracted their claims in 2012.

Hugin, a wealthy former pharmaceutical executive, has spent millions of his own money on the race, largely on negative ads against Menendez, the New York Times reports.

Menendez, who is out-funded in this election cycle, has aired ads focusing on Hugin's tenure at Celgene's. The commercials have focused on Celgene's drug price hikes and a $280 million fraud settlement in a lawsuit that alleged Celgene's pushed cancer drug for uses not approved by the Food and Drug Administration and submitted false claims to Medicare. He most recently attacked Hugin for his support of President Donald Trump.

The result of recent polls have varied, with one showing the race to be a virtual tie and others indicating that Menendez is leading by anywhere from six to 11 percentage points.

Menendez would normally cruise to re-election given Trump's low approval rating in the Garden State and the state's normal blue state status. New Jersey voters have not sent a Republican candidate to the U.S. Senate since 1972.

While Menendez's future in the upper chamber remains unclear, one thing is certain: His corruption trial late last year is currently weighing down his support.