Rep. Dave Brat tells incarcerated addict his own life is tough thanks to Democratic attack ads 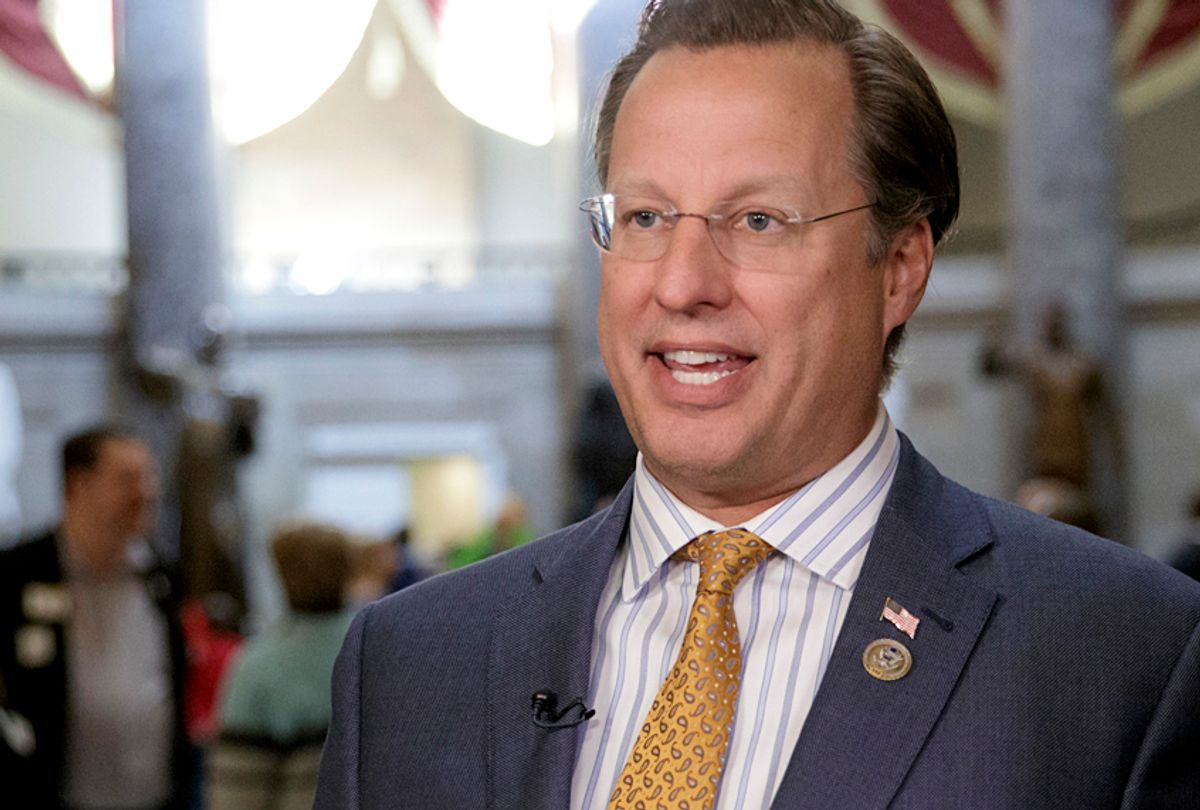 Virginia Republican Rep. Dave Brat suggested while visiting a prison on the campaign trail that he has it just as bad as incarcerated drug addicts because he has been the subject of Democratic attack ads.

Brat, who is in a tight re-election race in Virginia's 7th congressional district, told inmates at Chesterfield County Jail, "You think you're having a hard time -- I got $5 million worth of negative ads going at me,” according to The Washington Post.

"How do you think I'm feeling? Nothing's easy. For anybody. You think I'm a congressman. 'Oh, life's easy. This guy's off having steaks,'" Brat said in an audio recording published by the outlet. "Baloney, I got a daughter, she's got to deal with that crap on TV every day. It's tough.' "

Brat said in a statement after the event that meeting struggling addicts was "one of the most moving experiences" he has had in office.

"As a Christian, we love the least of these -- we visit those in prison," the statement said. "As a Member of Congress, one of the most moving experiences I have in this job is talking with recovering men and women fighting to rebuilding [sic] their lives."

But Democrat Abigail Spanberger, a former CIA officer who is running to unseat Brat, slammed his remarks and accused him of being more interested in his race than helping his constituents.

"These comments are disturbing and damaging in the way that they belittle and trivialize addiction and the challenges facing those in recovery," Spanberger said in a statement. "However, time and time again, Congressman Brat has demonstrated he is a politician who is more concerned with his own re-election than the struggles and well-being of people in our communities, and sadly, his comments aren't surprising."

The two candidates are in a dead heat in what was once a solidly Republican district in the Richmond suburbs, although Spanberger raised $3.6 million in the last quarter, compared to Brat's $1 million.

Brat's declaration of victimhood at the jail perfectly encapsulates a new theme that some on the right have adopted.

Fellow embattled Republican Rep. Duncan Hunter of California, who was indicted on dozens of charges that he used campaign donations to fund his lavish lifestyle, claims he is the victim of a “politically motivated ... witch hunt” by the Department of Justice, which is overseen by President Donald Trump and Attorney General Jeff Sessions.

Minnesota Republican Senate candidate Karin Housley, who is running against incumbent Sen. Tina Smith for Al Franken's former seat, was called out for comparing former first lady Michelle Obama to a “chimp” earlier this week. Her immediate reaction was to blame the “radical left,” claiming they “attack Republicans” when “they are losing.” Housley trails Smith by 16 points in the most recent NBC News/Marist poll.

The embrace of self-declared victimhood has especially been a favorite of candidates whose campaigns were doomed before they began. Roy Moore, who was accused of sexually assaulting a teenage girl when he was in his 30s and preying on teenage girls at the mall while he worked as a prosecutor, cast himself as the victim of the left and the press before losing his Alabama Senate race to Democrat Doug Jones. Don Blankenship, who was imprisoned for conspiring to willfully violate mine safety and health standards after 29 miners were killed in an explosion at one of his mines, cast himself as the victim of the Obama Justice Department. He finished last in the West Virginia Republican Senate primary.

Trump himself has repeatedly painted himself and Republicans as victims, most recently suggesting that Supreme Court Justice Brett Kavanaugh, who was accused of sexual assault, was the victim of people seeking fame and money and the media's rush to judgment.

"It is a very scary time for young men in America, where you can be guilty of something you may not be guilty of," Trump told reporters earlier this month. "This is a very, very -- this is a very difficult time. What's happening here has much more to do than even the appointment of a Supreme Court justice."