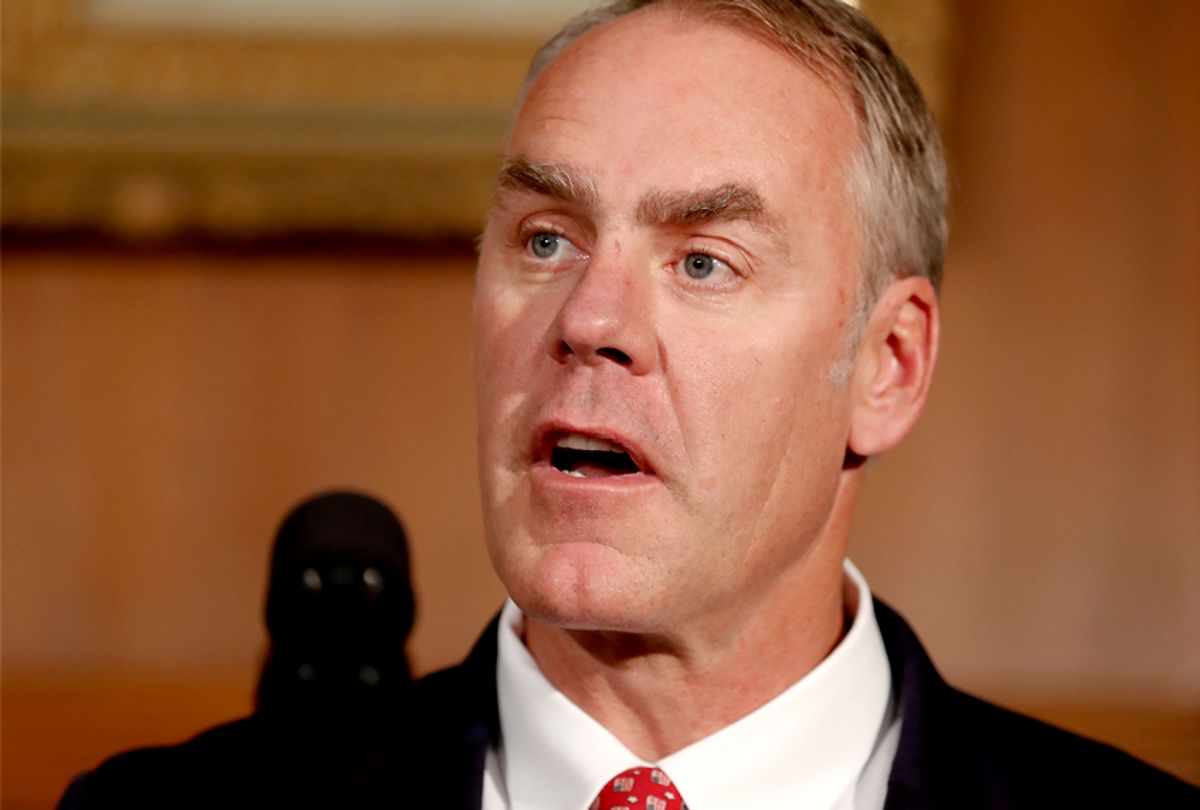 Interior Secretary Ryan Zinke attempted to maneuver or alter department policies to justify his taxpayer-funded trips with his wife, according to a report issued Thursday by the department's inspector general office. Just days before the damming report was released, Zinke was reportedly plotting to push out the internal watchdog before the latest critical report on the expensive travel practices of a member of President Donald Trump's Cabinet became public.

The report, which was first obtained by The Washington Post, reveals that staff in the department's solicitor office "approved Lolita Zinke and other individuals to ride in Government vehicles with Secretary Zinke" although it violated Interior policy. In the report, Zinke defended bringing his family along on travel, saying it had been approved by ethics officials. An employee in the DOI solicitors office told investigators she "routinely advised" Zinke's aides "that it would be 'cleanest' and 'lowest risk' if she did not ride with him" but could find a way to justify her riding in government vehicle because Zinke could not use a personal vehicle for travel. She said that schedulers and Zinke "want her in the car."

Zinke also confirmed to investigators that he had directed his staff to research the possibility of making his wife an official DOI volunteer — a request that one ethics official opposed on the grounds that it was suggested so that Zinke wouldn't "have to pay" for his wife's travel. Zinke subsequently "denied that it was an effort to circumvent the requirement to reimburse the DOI for her travel," the report states.

Now, calls for Zinke to become the latest Trump Cabinet member pushed out are starting to percolate.

"Even Scott Pruitt resigned before he could be fired, but Zinke doesn't even have that sense of decency," Sierra Club Executive Director Michael Brune said in a statement. "It's time Donald Trump fires Ryan Zinke, not give him a chance to engage in a Washington cover-up."

The IG's report comes at the end of a tumultuous week at the Department of Interior. Earlier this week, several news outlets reported that the Trump administration has hired Suzanne Israel Tufts, a political appointee from the Department of Housing and Urban Development, to oversee the Interior's top internal watchdog — an unusual move that has drawn criticism from government oversight groups.

Tufts' appointment, which Housing and Urban Development Secretary Ben Carson announced to his staff in an email last Friday, took lawmakers and officials in the Interior Department's Inspector General's Office by a surprise, according to NBC News. She would be overseeing Deputy Interior Inspector General Mary Kendall, who has led the agency's watchdog investigations since 1999. Kendall most recently led investigations into Zinke and his wife, as well as allegations that the secretary censored climate change reports.

Tufts, a former consultant and attorney without any experience as an investigator, would be leading one of the government's most active inspector general offices (Zinke has racked up 14 federal investigations into his behavior during his time as Interior Secretary). Officials at the Interior Department did not approve of Tuft's hiring as their agency's top watchdog, calling Carson's announcement "100 percent false information," according to the Washington Post. They also said that any announcement on a Senate confirmation would come from the White House.

Deputy Secretary of the Interior David Bernhardt pointed out that the Inspector General post at the Interior has been vacant for almost a decade and that while he has developed a good working relationship with Kendall, department leaders were looking to bring on someone the president could nominate to serve on a permanent basis.

"Mary would agree that it would be good for the inspector general to be a presidentially appointed, Senate-confirmed individual," Bernhardt said. "I think she would agree with us that the job has been vacant since [former Inspector General Earl] Devaney left, for almost a decade. That's not good, because that's not the way we run the country."

Rep. Raúl Grijalva, D-Ariz., the ranking member on the House Natural Resources Committee, which has oversight of Interior, said the move "stinks to high heaven."

"Secretary Zinke and the Interior Department are awash in wave after wave of scandal and corruption, and they decide now is the perfect time to get rid of the current IG," he said in a statement. He also said Tuft's appointment could motivate House Democrats to launch their own oversight hearings into Zinke if they take control of the House of Representatives in the midterm elections this November.

"Replacing one acting inspector general with another who has no significant government oversight experience, and at a time when there are several ongoing investigations involving Interior Secretary Ryan Zinke's activities, is politically suspect," Hempowicz said in a statement. "They shouldn't be changing hats right now, when there are numerous investigations left to be completed. The prolonged tenure of an acting inspector general at the Interior Department is a larger problem, but this move does nothing to address that."

Earlier this year, an investigation by Politico found that Zinke failed to disclose key information about his use of government helicopter rides for himself and staff, to and from Washington, D.C. events — including one time so he could ride horses with Vice President Mike Pence.

Another Politico investigation revealed that Zinke and his staff took several flights on private or military aircraft to his Montana hometown and between two Caribbean islands. A charter plane from Las Vegas to Kalispell, Montana, a short drive away from Zinke's home in Whitefish, cost taxpayers about $12,000 for a flight that would cost about $600 round trip per person if it were taken commercially.

Zinke has been at the center of scandals involving the misappropriation taxpayer funds in the past.  He was accused of travel fraud when he was a Navy SEAL in the 1990s, and faced controversy when a lucrative infrastructure contract in Puerto Rico was awarded to an unqualified energy company, Whitefish Energy, located in his small Montana hometown. Although there's no evidence that Zinke had anything to do with the Puerto Rican contract being awarded to Whitefish Energy, the coincidence of it being a company from his town attracted attention.