From the "free speech" campaign of 2015 to cry-bully Brett Kavanaugh and the bombs of October: A brief history 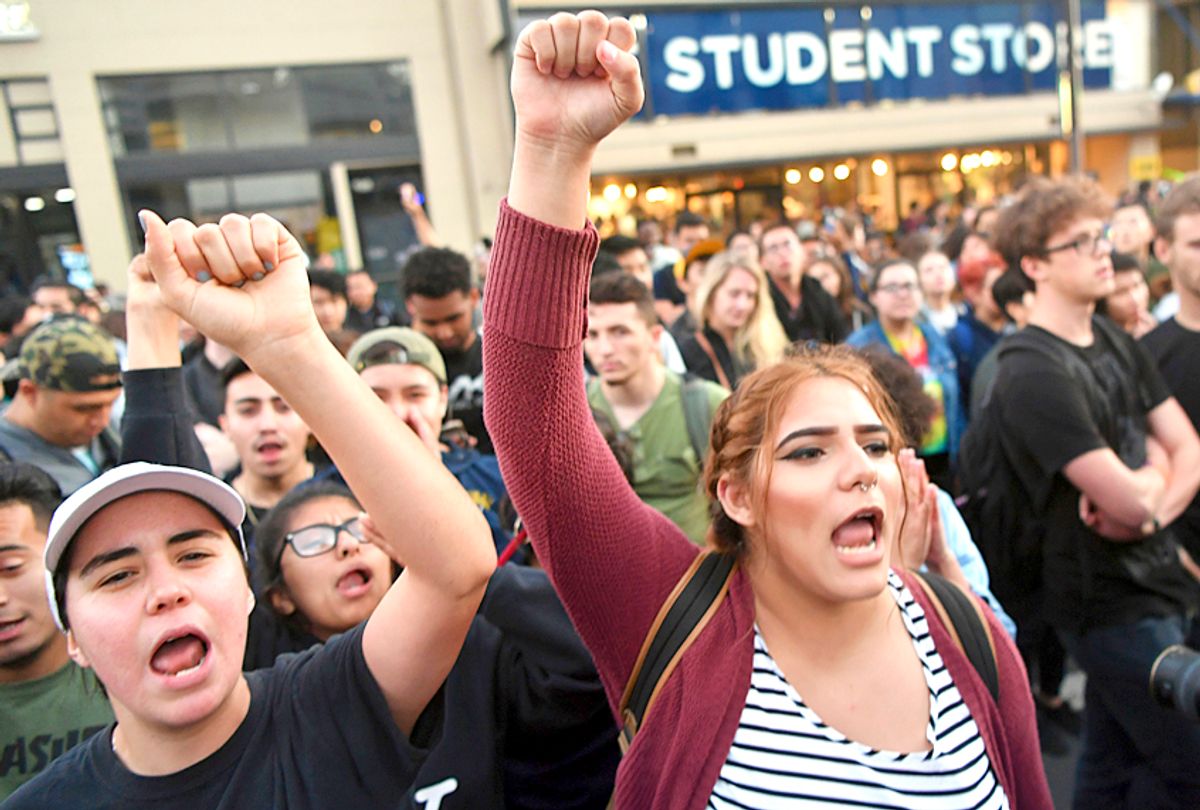 During the 2015-16 academic year, when explosive packages and political street violence weren't on our minds, a lavishly funded, brilliantly orchestrated “free speech” campaign drew sensation-hungry media into dramatizing the grave danger to Americans’ freedoms of expression and inquiry posed by petulant, censorious “cry-bully” college students, their coddling campus mentors and parents, and an ideology of racial and sexual “political correctness” enveloping our society.

“Free speech” crusaders roamed the campuses, taping screaming students and ballyhooing overreach by university sexual-harassment tribunals, stereotyping and smearing thousands of #MeToo and Black Lives Matter supporters and debt-staggered students of every description who were protesting responsibly against wrongs they had plenty of good reasons to be frightened and angry about.

Even overly sensitive “snowflakes” and censorious “cry-bullies” have been fairly reliable barometers of a development – the business-corporatization of American life -- that’s far more dangerous to our freedoms of expression and inquiry than some students’ and professors’ overreactions to it. That’s seldom mentioned by the “free speech” crusade. Instead we’re told that the disease of political correctness has spread throughout corporate culture and the media. That’s getting it backwards, as I argue in a just-posted Los Angeles Review of Books essay on how hollow, seemingly anodyne commercial speech seeds and provokes the hostile speech that’s swirling ever more virulently all around us.

Wrong though the politically correct are to celebrate or excuse catapulting so many men into expulsion from their careers and into Orwellian silence and virtual non-personhood before accusations meet real due process, on campus or off, some corporate directors and managers have been even more wrong to do just that. #MeToo supporters shouldn’t expect much from a power shift between the sexes that at the same time tightens corporate image control and workplace control. Breaking a company’s glass ceiling while failing to reconfigure its walls and foundations can empower a Margaret Thatcher or a Carly Fiorina, but not most women or men. Maybe that’s why conservative “free speech” crusaders who’ve condemned university tribunals so loudly have been eerily quiet about analogous boardroom decisions.

Yet even before most Americans could see why the “free speech” crusade was wrong to blame so much on college kids and their deans, the crusade itself was hijacked in 2016 by candidate Donald Trump. He took up its cry against political correctness just as his own sexist, racist and other abuses were exposing his moral and political bankruptcy. He got away with posing as a champion of free speech while vowing action against free speech in the press -- and by his critics and opponents -- partly because, as some retired New York police officers who resented their “diversity” training and “sensitivity” sessions told me, they believed the free-speech crusade’s deceptions and think that Trump “speaks his mind” about what they’ve had to put up with while in uniform.

Nothing is more ironic – and telling – about this reversal of blame than that Brett Kavanaugh became the epitome of a Trumpian cry-bully during his histrionic testimony before the Senate Judiciary Committee or that Sen. Jeff Flake, R-Ariz., who’s quitting office instead of standing up to Trump, became Trump’s snowflake on his way out by giving Kavanaugh’s confirmation the fig leaf of a short-circuited FBI investigation.

Yet no matter how alarmed we are by the specter of Trumpian authoritarian censorship, we need to face the even-more dangerous, if subtle encroachment on our freedoms of speech – the commercial assault on truly free speech that has long seeded both the campus overreactions and Trumpism itself. We miss making the connection not only because we’ve been distracted from it but because we’re invested in it.

We should have noticed it the minute that Trump’s Business Advisory Council disbanded because of his indulgence of racist, fascist demonstrations in Charlottesville, and again when corporate managers began to respond with unprecedented alacrity to charges of sexual harassment. Like the conservative campus “free speech” crusaders who have worked to discredit dissent against free-market nostrums while waving “free speech” banners, corporations have been tightening their image control, workplace control, and even public-discourse control while waving First Amendment banners.

The Citizens United ruling of 2010 affirmed corporate “freedom of speech” in direct contributions to election campaigns, and the National Association of Manufacturers et al. v. The National Labor Relations Board ruling of 2012 affirmed companies’ supposed First Amendment right not to speak by refusing to post government notices of employees’ legal rights in their workplaces. Never mind that, in 2003, as Haley Edwards noted in a Washington Monthly analysis, the same federal district court had “confirmed the legality of President George W. Bush’s executive order requiring federal contractors to put up explicitly anti-union posters in their workplaces.”

Instead of such threats spreading from campuses to corporations, they’ve been spreading to the campuses and other institutions of civil society, quite obviously with the market-corporatization of universities and government. Donald Trump and Brett Kavanaugh did not cause this. They’re simply the most prominent carriers of the disease of corporatization that few dare to name because so many have contracted it – and contracted with it --  especially those of us whose careers and assets are so heavily invested in the casino-like financing, predatory lending and consumer bamboozling that has all but emptied democratic free speech of power and meaning.

Although Trump didn’t cause or mastermind this transformation, he was one of its accelerants long before he entered politics, through his reality-TV show “The Apprentice,” which instructed its adherents weekly in the arts of submission to the regime I’ve just sketched. Whatever he may intend for his critics if he keeps control of all three branches of government after Nov. 6, the regime I’ve described has no problem with raucous “free speech” that drowns deliberative, democratic speech in a cacophony of lies.

As I argued here in Salon and in The Baffler last summer, and in this podcast conversation with Yale Law School student Jacob Schriner-Briggs -- and as I'm arguing anew this week in the Los Angeles Review of Books -- our freedom of speech faces not only the dangerous slippery slope of government censorship but a second slippery slope of market sensor-ship that gropes and gooses us in ways that are designed almost mindlessly and delivered algorithmically to bypass our brains and hearts on the way to our lower impulses and our wallets. That’s what has prepared so many Americans to surrender their freedom as citizens in exchange for the illusory freedom of consumers.