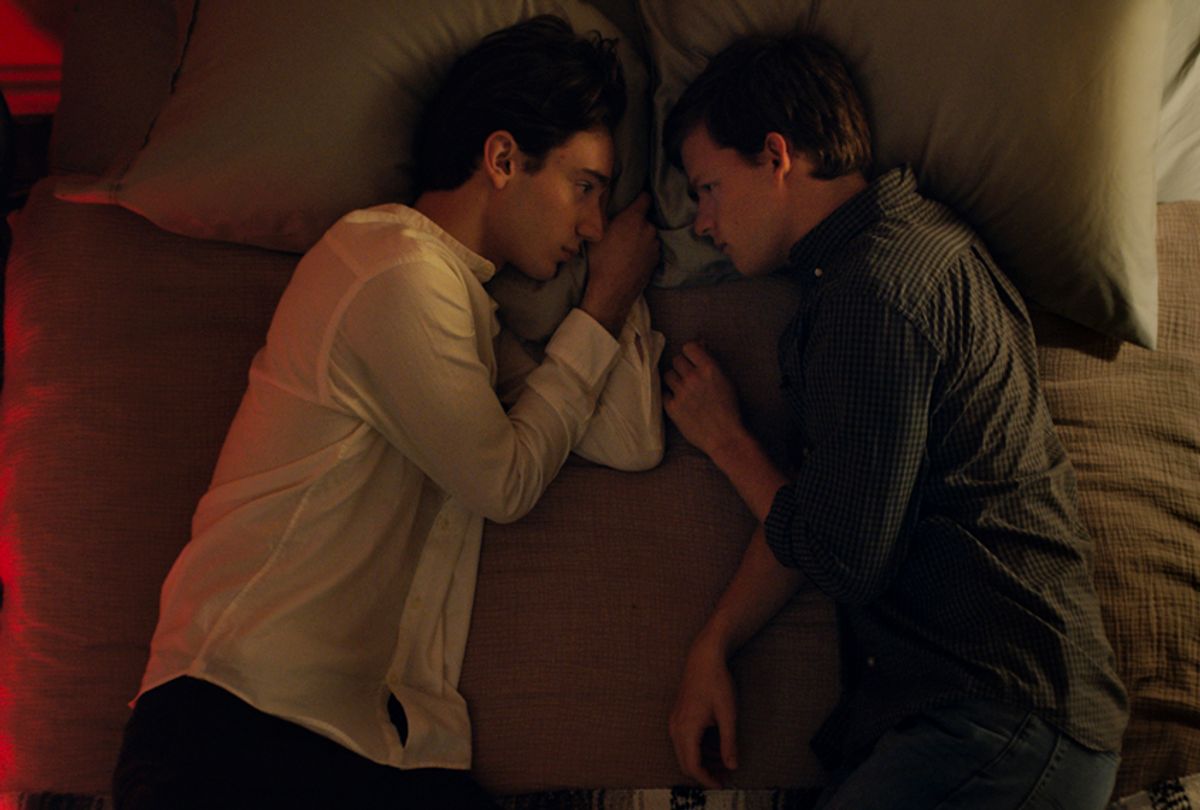 One of the most intense, suspenseful films of the year isn't a thriller. It's something scarier — a true story. Based on Garrad Conley's riveting memoir of his teenage experience in a program for gay conversion therapy, "Boy Erased" is often exactly as harrowing as you'd expect from the director of the 2015 thriller "The Gift." "I had my own fascination with institutions growing up," Joel Edgerton told Mary Elizabeth Williams during a recent Salon Talks. And, he says, "a big fear of them."

"In the broad spectrum of conversion therapy, Garrad's story is understated," says Edgerton, who's the film's director, screenwriter and costar. "There are places that I'm shocked that parents would would drive up and say, 'This looks like an okay place to leave my child.' Barbed wire on the top of fences, staff who admit that they're willing to beat the kids. They're locked in their rooms, like solitary confinement. And [they use] torturous practices like electric shock therapy. Some parents are so disconnected the moment they find out that their child identifies as gay, that love is almost withdrawn. Because how could you do that? How could you send your child there?"

But "Boy Erased," starring Lucas Hedges, Nicole Kidman and Russell Crowe, is also very much a redemptive tale of the power of unconditional love. While Edgerton acknowledges that many conversion programs have "really just preyed on children, out and out abuse," he explains that "We wanted to render the film in the same way Garrard had, with an empathetic point of view." He explains, "There's a really positive message there in Garrard's parents. I thought his story was worth telling because [they] acknowledged in their own different ways that it doesn't work; that it was a mistake. They sent him there because they loved him. They thought they were trying to help him get back to his community in a way that he wouldn't be persecuted. That aspect is the complicated part of it, because nobody really was a villain. I don't think his dad was saying, 'I don't love you anymore, and get out of my house.' He was saying, 'I want you to consider that it will be hard for you to live in this community, and to live in this house if you don't try and change, because we believe change is possible.' It came from, I hate to say this, but it came from a place of care and love. Therapists weren't just profiteering, waving parents off at the gate and then twirling their mustaches and beating kids."

In an era of black and white divisiveness, Edgerton is aiming for something that can instead invite and unite. "This film is very respectful towards religion," he says. "I respect all different people's points of views, their belief systems, the way they view the world, and who they worship, and what they worship. I actually have a really deep admiration and envy for anybody who has deep faith in their life. I think it's an incredible comfort to any individual to know that they have a belief in something bigger than ourselves." But where he draws a sensible line is "against anybody who's using that as an agenda towards damage, whether it's war or the walking back of freedoms of individuals. There's an article that we've rendered in the film as if it's written by Garrard, and it starts by saying, 'If God only knew.' It was my way of saying, 'I wonder what God or Jesus would think if [he saw] this was going on?' That's an agenda that is decided on Earth based on the feeling of how God feels about people who have same sex attraction. It really needs to be examined, and in my belief, it needs to be dismantled."

Conley was sent to Love In Action, which has changed its name and discontinued its teen "Refuge" program in 2007. Despite its negative reputation, only fourteen US states currently ban conversion therapy for minors. But for evidence of how toxic the practice still is, consider Edgerson's experience with John Smid, the man his character in the film is based on. "He was kind of a distant consultant on the film if we needed information," says Edgerton. "He's now turned his back on conversion therapy. He's spoken out. He's been outspoken online. He still has faith in his life, and he's open and out as a gay man. You don't just have to abandon God if you want to lead a life of living with or being married to somebody of the same sex. John represents that now, and he also represents one of the people who speaking out against therapy."

Edgerton notes, "The thing about John that's interesting to me is that he, deep down, knew that the therapy wasn't working. He also acknowledged to me that in his 25 years, of starting as a client… he was making it up as he went along, and knowing all the while it wasn't even working for himself. I found it interesting to play. It's also important to acknowledge that you have people calling themselves therapists and doctors who really don't have the right or the qualification to do that. And that's one of the keys to what I think is very shammy about it."

While the film is already generating accolades and Oscar buzz, Edgerton — who also costarred in the civil rights biopic "Loving" — says that he "wasn't trying to find an important movie to make." Instead, he says, "I knew I wanted to put something positive out into the world, and I knew I wanted to work with actors in a drama. I realized in hindsight once I became obsessed, that it checked those two boxes.... When I read Garrard's book, it just really emotionally grabbed me, and I found myself thinking about it daily. I started doing things on a regular daily basis towards pushing the idea of turning it into a movie — meeting Garrard, meeting with survivors of conversion therapy. Because for all of the despair you go through, or characters go through; for all the chaos and confusion; ultimately that story — his story — has a positive outcome." And, as it raises awareness of the continuing practice of conversion therapy, he says he hopes Garrard Conley's story also has "the potential to help other people in a positive way."

That positive message comes from showing the places where conversion is truly needed. With its depiction of "therapy" techniques designed to make boys behave in a more "manly" manner, "Boy Erased" reveals the painful toll that macho culture takes on boys and men. It's something Edgerton, who's spent over twenty years in the entertainment business — often playing action roles and heavies — admits he knows plenty about. "As a young, male actor I identified with tough guys," he says. "I grew up in the '80s, and the bigger your muscles, the bigger the movie star you were." Now, however, he says, "I think the best male actors have a certain gravitas to them. Guys like Russell [Crowe], for example. He has such an emotional access and such a sensitivity to him."

Edgerton says, "I think one of the myths about masculinity is that you're not allowed to show your sensitivity. It's a big problem, the stereotype of the silent father that doesn't express his emotions. As a young man, I saw strength as silence and stoicism and only speaking when it was necessary, not talking about emotion. And that weakness was the opposite. Weakness was being open about having an essay of words to describe what was going on for you internally. I realized at too late an age that those definitions should be flipped; that strength should be expression, and that weakness should be limiting one's expression." He adds, "I think that Garrard's mother is that strength. She is somebody who was able to tune in internally to what was going on with her; get in touch with her instincts. She said, 'I'm no longer going to be pushed around by the masculine ideas in my neighborhood, under my roof, or in the community.' She faces this wall of judgment and her own kind of persecution. But her weapon is love, and her weapon is expression of truth." Edgerton adds, "It kind of goes to show you that sensitivity — whether it lives in a man or a woman — I think is strength."