Good Trump, bad Trump: Media honors flip-flops, but we all know his fans crave the ugly

Trump navigates between conciliatory and nasty messages, but his followers all know what he really means 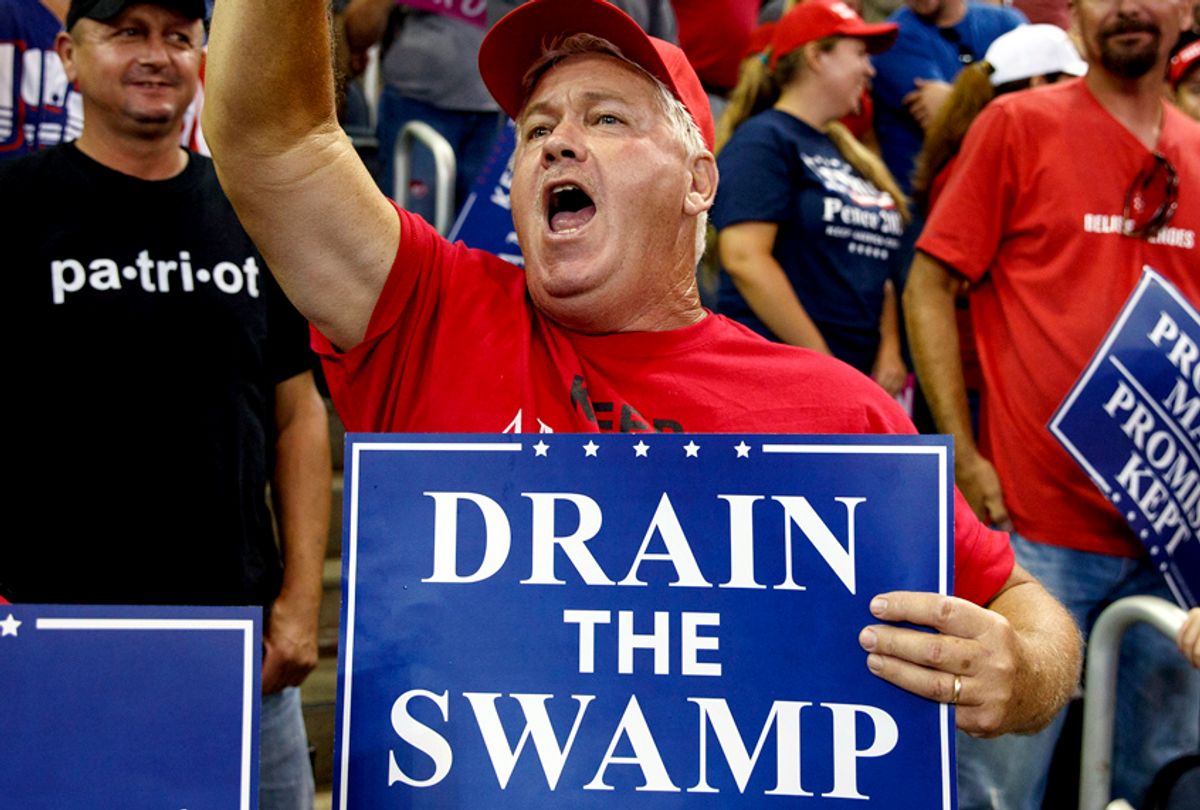 After a week of hate crimes — bombs mailed to prominent Democratic figures, a racist shooting in Kentucky, a mass murder at a synagogue in Pittsburgh — the debate over Donald Trump's nasty rhetoric and proclivity for conspiracy theories has intensified. It's not just the question of how much responsibility Trump bears for inspiring or motivating both the bomber and the synagogue shooter. This horrible escalation of violence also raises the question, yet again, of whether Trump is capable of toning down the rhetoric and performing the conventional presidential duty of offering condemnations of violence and calls to unite the country against terrorism.

In an interview on "Face the Nation," House Speaker Paul Ryan suggested on Sunday that meeting this minimum standard was somehow in Trump's wheelhouse of skills.

Dickerson, to his credit, expressed skepticism: "But, I mean, come on."

Ryan's wiggle room here is, of course, that Trump occasionally makes gestures towards acting presidential, such as his brief speech last week condemning the bombings or when, during a rally mere hours after Saturday's shooting, he called for "working together to extract the hateful poison of anti-Semitism from the world."

But of course Trump SOP is to then flip around and say quite different things. By Sunday evening, he was back to Twitter, blaming the media for "causing problems" and unsubtly exploiting these acts of terrorism to intimidate journalists out of negative reporting on his administration. Intentionally or not, this amounts to winking at future terrorists that their actions are welcome in assisting this effort.

So yes, Trump speaks out of both sides of his mouth, but for Paul Ryan to use that to avoid holding the president accountable for the rising tide of rancor and violence is utter nonsense. It's clear enough that the only message that Trump's supporters are hearing — the only message most people take seriously — is the one that is hateful and deceitful.

The concept of "political correctness" that is so popular on the right gives Trump the leeway he needs to placate centrist pundits with empty rhetoric about "unity," while making sure his base understands that he doesn't mean any of the conciliatory things he says.

It's not just that Trump's tone when reading denunciations of violence or bigotry is that of a third-grader reluctantly thanking grandma for buying him socks instead of toys for his birthday. It's that Trump and his administration do everything in their power to broadcast afterwards that his true feelings are not the "politically correct" ones that he felt obligated to express.

Trump's behavior this week is a good example. He not only kept dumping tantrums on Twitter that undercut the message of his speeches, but he also suggested to reporters that he might "really tone it up," a reminder to his base that he has all sorts of bile in his heart that the forces of political correctness are barely holding back.

Just in case there was any remaining doubts, White House insiders leaked a story to Peter Baker and Maggie Haberman of the New York Times about how it "took the importuning of his Jewish daughter and son-in-law" -- that is, Ivanka Trump and Jared Kushner -- "to craft a powerful statement of outrage at anti-Semitism after Saturday’s slaughter at a Pittsburgh synagogue."

Whatever individual motivations leakers may have had for planting that tidbit, the takeaway for Trump supporters is clear enough: His words opposing bigotry are not from his heart, but something he parroted at the behest of a daughter who is trying to clean up his image for the mainstream media. So these sentiments can be safely ignored.

We see this play out in Trump rallies, where obligatory language about nonviolence is met with a muted response from crowds who prefer to save their cheering for calls to lock up Trump's political opponents without cause or to egg him on as he denounces the "enemies of the people" media for daring to publish critical stories.

This avid hunger for ugliness suggests that even after Trump is gone -- whenever and however that happens -- there's little hope of opening right-wing ears to the message that racism and violence are serious problems. Terms like "political correctness," "social justice warriors" and "virtue-signaling" have become  widespread on the right, and they all undergird the larger argument that no one actually believes in ideals like nonviolence or justice.

Instead, the belief is that such noble sentiments are simply posturing meant to score political points. Liberals who say these things are invariably classified as hypocrites who would throw out their so-called principles the second it benefits them. Conservatives who say these things are either "cucks" who are browbeaten by the left or, in the case of Trump himself, savvy operators who virtue-signal to get the man off their backs, but will return to speaking their minds as soon as they can.

This ideology has created an almost perfect filter on right-wing media that weeds out any uncomfortable messages about violence and bigotry being wrong, since all such messages can be understood as hypocritical  manifestations of political correctness.

Former Trump staffer and current right-wing talking head Sebastian Gorka, for example, appeared on Fox News after accused bomber Cesar Sayoc was arrested to complain that "violence against those you politically disagree with is OK for one party in America and one party alone and it's the Democrats." Gorka claimed that "antifa" was somehow responsible for more violence than right-wing terrorists, but cited no examples because there aren't any.

This lie serves an important political purpose, in that it instructs Fox News viewers to  write off any rhetoric they hear denouncing violence as self-serving hypocrisy coming from liberals who are trying to score points. This rhetoric, in turn, justifies and encourages further right-wing violence (while claiming not to) by implying that it's an ennobling effort to settle the score.

All of this is reason to fear that the situation will get much worse in the United States before it gets better. The right is in thrall to a rhetorical system where all positive messaging is shrugged off as empty rhetoric imposed by sanctimonious hypocrites, while ugly, violent rhetoric is processed as brave truth-telling. All efforts to claim otherwise, under this system, will be read as even more "political correctness," which can safely be ignored.