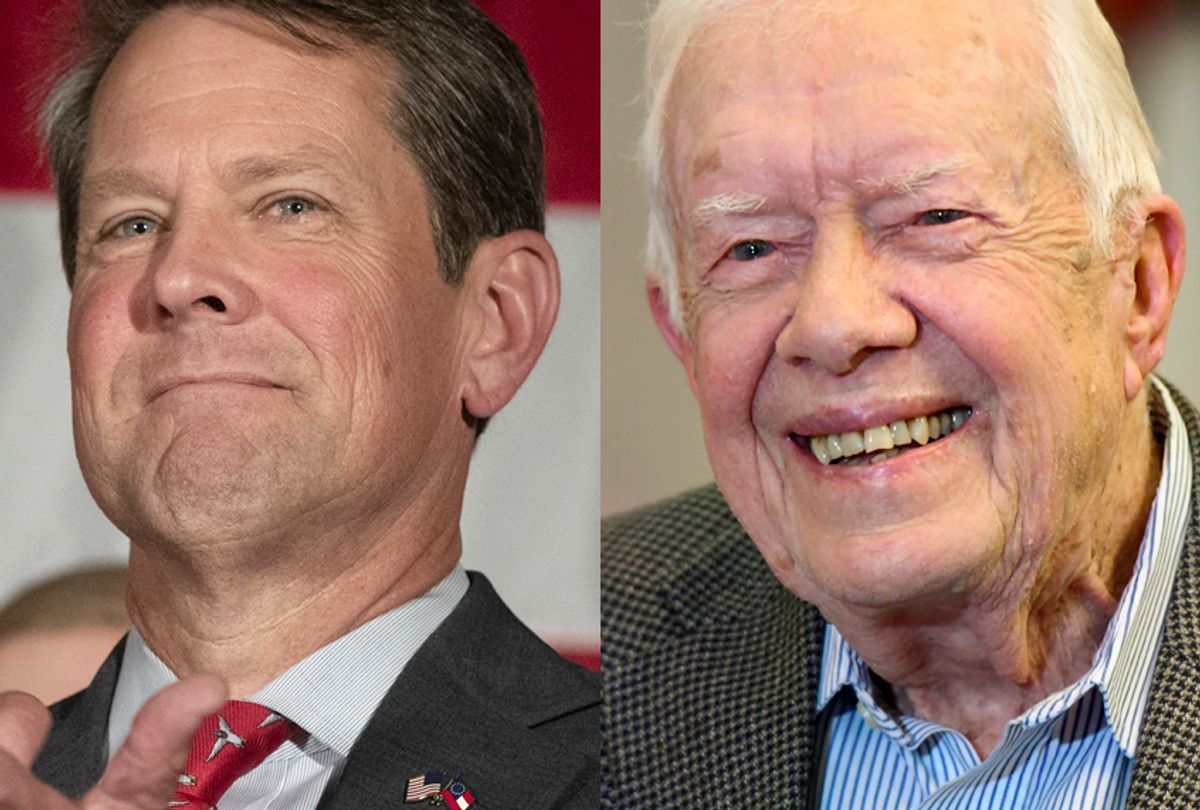 President Jimmy Carter is calling for the Republican candidate in the race for governor of Georgia, Brian Kemp, to resign as Georgia's secretary of state on the grounds that he cannot impartially administer an election in which he is also a candidate.

"I have officially observed scores of doubtful elections in many countries, and one of the key requirements for a fair and trusted process is that there be nonbiased supervision of the electoral process," Carter wrote in his letter.

After alluding to the controversy over racial discrimination in Georgia's elections and the security of Georgia's voting machines, Carter drew attention to the fact that Kemp is overseeing the gubernatorial election even though he is also one of the two major party candidates.

"This runs counter to the most fundamental principle of democratic elections — that the electoral process be managed by an independent and impartial election authority," Carter wrote. "Other secretaries of state have stepped down while running for election within their jurisdiction, to ensure that officials without a direct stake in the process can take charge and eliminate concerns about a conflict of interest."

He concluded, "In order to foster voter confidence in the upcoming election, which will be especially important if the race ends up very close, I urge you to step aside and hand over to a neutral authority the responsibility of overseeing the governor’s election. This would not address every concern, but it would be a sign that you recognize the importance of this key democratic principle and want to ensure the confidence of our citizens in the outcome."

Greg Palast, a journalist who has specialized in voter disenfranchisement, told Salon earlier this month that Kemp has overseen major voter purges as Georgia's secretary of state.

"Brian Kemp, Georgia’s secretary of state, purged 550,702 Georgians from the voter rolls in 2016 and 2017 — that is, canceled their registrations," Palast told Salon. "I’m not guessing. After much resistance, Kemp turned over the names and addresses of each one of these purged voters in response to a threat of a federal lawsuit (which I filed in federal court in Atlanta and served on Kemp Friday)."

He added, "Of these, we are certain that 340,134 were wrongly removed, with no notice that they were purged. I want to thank Salon for your report, which went viral, letting Georgians know my foundation had listed all the names of the purged at GregPalast.com. Unfortunately, there were only a couple of days left to re-register, but it appears that thousands did so."

Speaking to Salon in July, President Carter also explained that he thought things were getting worse in America under President Donald Trump than they had ever been before.

"I think that under Trump the government is worse than it has been before," Carter told Salon. "This is the first time I remember when the truth is ignored, allies are deliberately aggravated, China, Europe, Mexico and Canada are hurt economically and have to hurt us in response, Americans see the future worse than the present, and immigrants are treated cruelly."