Ever blamed "the Jews"? You have blood on your hands too

If you fault "the Jews" as a group, you share blame for the Pittsburgh massacre even if you reject violence 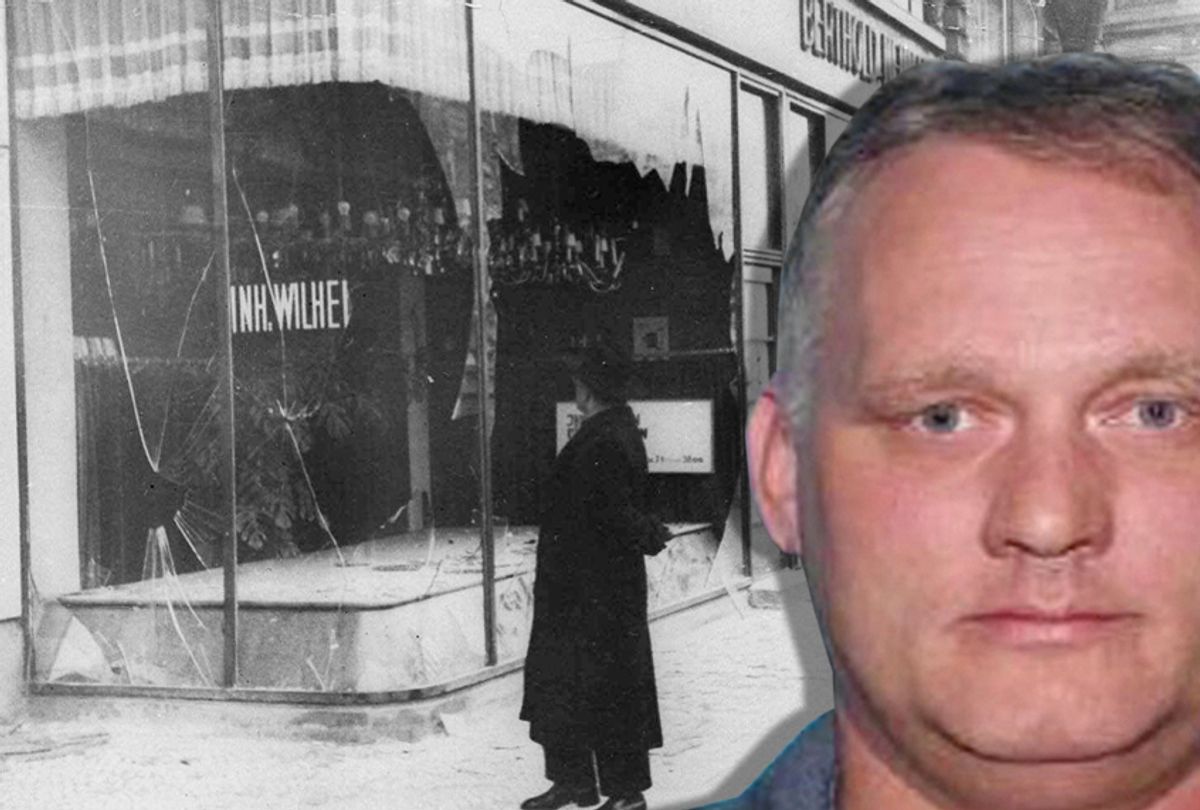 Robert Bowers; A man looks at the wreckage of a Jewish shop in Berlin on Nov. 10, 1938, in the aftermath of Kristallnacht. (AP/Salon)
--

If you ever have spoken disparagingly of "the Jews," then responsibility for the Pittsburgh synagogue shooting that left 11 people dead falls on your shoulders too.

Anti-Semitism, like all forms of prejudice, has deep roots in our culture. Of course the vast majority of people who make false or hateful generalizations about Jews will never engage in acts of anti-Semitic violence. But they make it possible for others to behave violently by validating the assumptions they use to rationalize acting out against Jewish people — or, as they are likely to put it, "the Jews."

These are the people who single out Jewish leaders in business, politics, entertainment, the media and other walks of life as a destructive and nefarious force. when they want to criticize something. The precise nature of what "the Jews" are doing can seem random, or almost irrelevant. For right-wingers, it will be the popular bogeyman of the moment, such as the caravan of Central American migrants heading toward the U.S. border or the "liberal media" that denounces a Republican president.

For some leftists and progressives, the targets may be Wall Street banks and other major financial institutions, sometimes taking a page from the anti-Semitic rhetoric employed by that most infamous of self-hating Jews, Karl Marx. Both sides, of course, will frequently target the state of Israel, which certainly deserves criticism for its treatment of the Palestinian people but has also attracted a certain breed of anti-Semite who embraces Israeli atrocities as a cover for their own bilious views. Here's an easy tell that distinguishes bigots from legitimate critics: The former will come up with arguments that hold every Jew accountable for the actions of Israeli officials, and are likely to lump Israeli misdeeds into larger diatribes against "the Jews."

Because Jews have accomplished so much in so many professional spheres — a fact that should redound to our credit but is instead cited, with no proof beyond the flagrantly false, as a sign of sinister conspiracy — it is easy for those who are of a mind to blame "the Jews" for the world's evils to find individual Jewish people who appear to validate their bigotry.

Just to be clear, I chose these examples because they are the ones that come to mind in 2018. One could draw many others from history. Almost exactly 80 years ago, Germany kicked off the Holocaust with Kristallnacht, a pogrom against Jews throughout the land in response to the assassination of German diplomat Ernst vom Rath.

If I took a time machine back to 1862, I'd find Gen. Ulysses S. Grant forcing Jews from their homes during the Civil War after baselessly blaming them for cotton smuggling. If I instead traveled to 1605, I could see William Shakespeare premiere one of the world's most infamous anti-Semitic caricatures, the moneylender Shylock in "The Merchant of Venice," with its implicit argument that Jews need not be mistreated if they are forcibly converted to Christianity.

In 1492, the year that King Ferdinand and Queen Isabella of Spain famously sent Christopher Columbus on his transatlantic voyage, they also exiled the then-thriving Spanish Jewish community at the urging of the Catholic Church. At other periods in history Jews have been blamed for plagues (the Black Death), for cannibalism (the blood libel), for the killing of Jesus and conflict with the Prophet Muhammad, for supposedly flaunting their wealth and for living in squalid ghettos (a term coined to refer to the neighborhoods assigned to the Jews of Venice).

This is why I applaud those Jews who are holding President Donald Trump and his fellow Republicans accountable for stoking anti-Semitism. If you are willing to say, as Trump did, that there are "fine people" among the white nationalist demonstrators in Charlottesville who chanted "Jews will not replace us" and who believe (as Pittsburgh shooter Robert Bowers did) that Jews are perpetrating "white genocide," then you enable the beliefs that allow acts of violence like the one that occurred on Saturday.

The same can be said of a man who knowingly plays on anti-Semitic stereotypes in his speeches or removes any reference to Jews from a White House statement on the Holocaust, as well as Vice President Mike Pence appearing with a faux rabbi preaching Christianity instead of a genuine Jew to honor the Pittsburgh synagogue shooting victims (coincidentally I discussed Christian-Jewish interfaith relations with Pence's daughter, writer Charlotte Pence, last week). Through these actions, Trump and his administration have negated any goodwill they might have otherwise earned among Jews by including Jewish advisers or recognizing Jerusalem as the capital of Israel. The same can be said of conservatives who regularly single out Jewish liberals like George Soros, Tom Steyer and Michael Bloomberg for hatred, knowing full well that doing so plays into the myth that one of the big problems in the world is that there are too many powerful Jews running things.

It's also worth noting that Bowers reportedly denounced Trump for having too many Jewish advisers. I mention that not to let Trump off the hook, but to observe that those who hate Jews do so with a passion that cannot be abated even by the right's current love affair with Trump. Like all politicians, Trump's star will eventually fade; like all bigotries, the hatred of "the Jews" will sadly endure.

I do not say this from a neutral perspective. More than 20 years ago I nearly lost my life in an anti-Semitic hate crime, and during the 2016 election cycle I was targeted by Andrew Anglin of the Daily Stormer for calling out Trump's anti-Semitic rhetoric. (Anglin finally drew widespread liberal ire when he mocked the death of leftist protester Heather Heyer, who spoke out against the bigots at Charlottesville). After an anonymous white nationalist posted anti-Semitic memes on my Facebook page because I wrote an article criticizing Trump, I figured out who the person and asked if he would agree to an interview. He promptly doxxed me and, characteristically, claimed he had only been criticizing Israel and not Jews in general (even though the article that set him off had nothing to do with Israel).

So yes, I have skin in the game because I am a Jewish member of the "liberal media," and also an academic. I am not unbiased here.

Then again, as the fate of the 11 Jews murdered at their house of worship last weekend makes clear, one doesn't need to check all of those boxes in order to incur the wrath of the hateful. All that is necessary is for one to be among "the Jews" — because in the eyes of those who hate us, we are not a group of 15 million souls with our own personalities, strengths, foibles, dreams and fears. We are a collective, "the Jews," meant to represent whatever it is they choose to hate about us at a given moment.

Of the countless scholars who have tried to understand anti-Semitism, I think philosopher Jean-Paul Sartre came closest to nailing it in this passage from his 1946 essay "Anti-Semite and Jew":

It is not unusual for people to elect to live a life of passion rather than of reason. But ordinarily they love the objects of passion: women, glory, power, money. Since the anti-Semite has chosen hate, we are forced to conclude that it is the state of passion that he loves.

Again: If you are someone who thinks of "the Jews" in negative terms, that doesn't mean you will commit an act of violence, or that you consciously justify such crimes. It does mean, however, that the views you propagate or allow to fester are the same ones responsible for the actions of people like Robert Bowers. You did not pull the trigger, but you supplied him with ideological ammunition no less deadly than the cartridges in his semiautomatic rifle. And until you confront the state of passion that makes you hate "the Jews," others like those 11 people in Pittsburgh will pay for your hatred with their lives.