Abrams schools McCain on AR-15 rifles: "It is possible to believe in responsible gun ownership"

On "The View," Abrams explains how Americans can support both the 2nd Amendment and responsible gun ownership 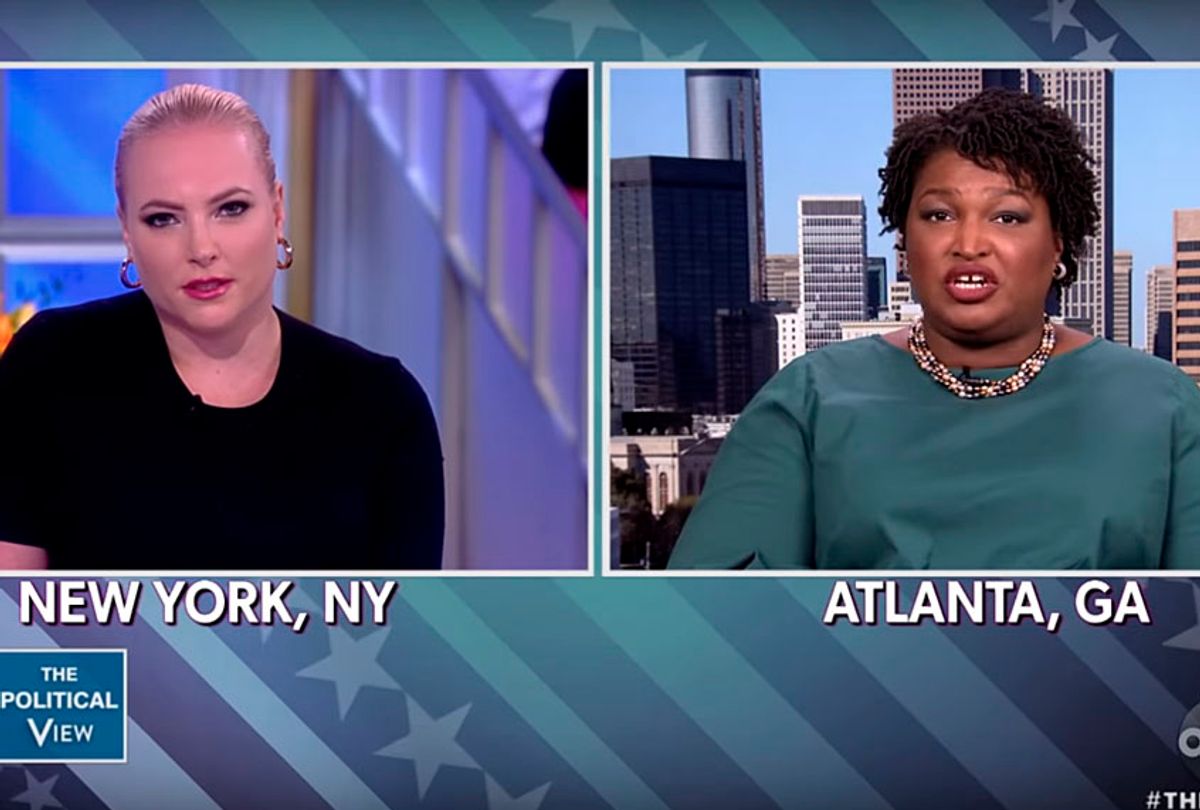 Meghan McCain and Stacey Abrams on "The View" (YouTube/The View)
--

Meghan McCain faced off on Tuesday against Democratic candidate Stacey Abrams, who is running for governor in Georgia, on gun control. Abrams, who would become the first black woman governor in America if she is elected next week, dispelled the idea that one could not believe in and respect the 2nd Amendment and be in favor of sensible gun reform.

"I am not anti-gun," Abrams said during an appearance via satellite to "The View." "However, I know that the most responsible gun owners understand that they have the responsibility for the firearms – and making sure that only responsible people have those firearms."

"That's why I believe in a background check. I believe in a three-day waiting period. I believe that those who commit domestic violence and stalking should not have access to weapons," she continued. "I do not believe that weapons of mass destructions, like the AR-15, belong in civilian hands."

McCain continued to press Abrams for confirmation if she supported a ban on AR-15 style rifles. "I do," Abrams replied. "I've shot an AR-15, and I think you probably have, too. And while it is an amazing amount of power, it is also an amazing amount of destruction. And there is very little that can be done to protect vulnerable communities when the AR-15 is present."

The Democratic politician acknowledged that, in order to accomplish a ban on assault rifles, a conversation would likely need to happen on a national level. However, Abrams added, "I do want to push back on any notion that I believe that the 2nd Amendment is not the law of the land. I support the 2nd Amendment."

Explaining that, in her own family, gifting rifles for her dad is an annual Christmas tradition, Abrams said, "It is possible to believe in responsible gun ownership and to believe that there should be regulations on that. Antonin Scalia said that. And we have to believe, as a nation, that when our communities are vulnerable — when you can't go into a synagogue, or a church, or a school, or a movie theater without out fear for your life — there is something wrong with our system of gun ownership. And we have to fix it."

In a moment of speechlessness, McCain replied, "I appreciate your honesty."

The governor's race in Georgia is an incredibly tight one, and Real Clear Politics' latest polling average shows Abrams' Republican challenger Brian Kemp up by just 1.4 percentage points. Moreover, the state has also been in the spotlight over allegations of voter suppression. As the current secretary of state, Kemp is in charge of elections. According to the Associated Press, Kemp's office has purged 1.4 million voter registrations since 2012, including more than 600,000 registrations last year, as part of what he claimed was "voter roll maintenance."

Many high-profile celebrities and politicians are backing Abrams and heading to Georgia to campaign for her. The latest to announce her support is Oprah Winfrey, who plans to door-knock and hold two town halls with Abrams in the final stretch of the race, according to BuzzFeed News.

Comedian Will Ferrell was also spotted last week in Georgia knocking on doors and campaigning on Abrams' behalf. Former President Barack Obama also plans to travel to Atlanta on Friday to campaign with Abrams and other Democrats at Morehouse College.