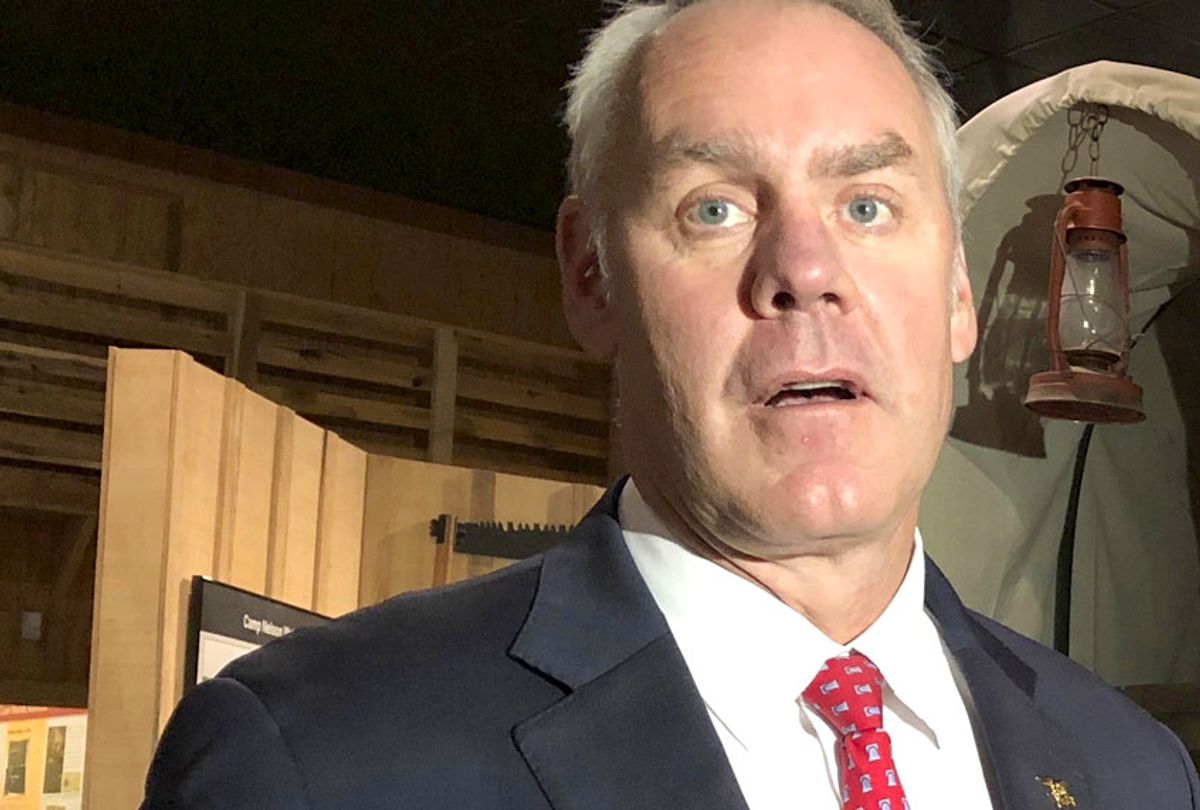 Ryan Zinke, who serves as Secretary of the Interior under President Donald Trump, is having a very bad week.

We can start with a speech he delivered at Camp Nelson, a newly-designated national monument in Kentucky where black soldiers were recruited and trained during the Civil War. As a Democratic political action committee named American Bridge 21st Century discovered and HuffPost confirmed, Zinke used his speech to equate the slaveholding Confederate General Robert E. Lee with iconic civil rights leader Dr. Martin Luther King, Jr.

While Lee wrote in 1856 that "in this enlightened age, there are few I believe, but what will acknowledge, that slavery as an institution, is a moral & political evil in any Country," he also claimed that slavery was "a greater evil to the white man than to the black race" and argued that the "painful discipline they are undergoing, is necessary for their instruction." He also owned slaves himself and on one occasion ordered fifty lashes to a pair of slaves who tried to escape, as well as twenty to a different one who had also tried to escape, even reportedly telling the overseer to "lay it on well."

Zinke's bad Halloween isn't limited to the revelation that he compared a human rights violator like Lee to a human rights hero like King. He also has several potential scandals to worry about.

Deputy Inspector General Mary L. Kendall, who is also serving in the role of acting inspector general, just referred a probe into Zinke's conduct as Secretary of the Interior to the Department of Justice. As The Washington Post reported:

The Interior Department’s Office of Inspector General has referred one of its probes into the conduct of Secretary Ryan Zinke to the Justice Department for further investigation, according to two individuals familiar with the matter.

Deputy Inspector General Mary L. Kendall, who is serving as acting inspector general, is conducting at least three probes that involve Zinke. These include his involvement in a Montana land deal and the decision not to grant two tribes approval to operate a casino in Connecticut. The individuals, who spoke on the condition of anonymity because they were not authorized to talk publicly, did not specify which inquiry had been referred to the Justice Department.

The referral means that a criminal investigation might follow, although the details of what such an investigation would entail remain unclear. That said, the mere fact that the referral occurred looks bad for Zinke, who has already had more than his fair share of scandals. Earlier this year it was reported that he had spent $139,000 on new doors for his office suite. Last year the spotlight again fell on Zinke when a small company from Zinke's hometown named Whitefish Energy was awarded a $300 million contract to help rebuild Puerto Rico's infrastructure after Hurricane Maria, a decision that was never officially linked to Zinke but which was extremely odd given that the company only had two employees and it's only reason for being prominent at all was that it was located in the same small Montana town from which Zinke also hailed.

Even before he became interior secretary, Zinke has encountered scandals, such as when he was accused of travel fraud during his days as a member of Navy SEAL Team 6.