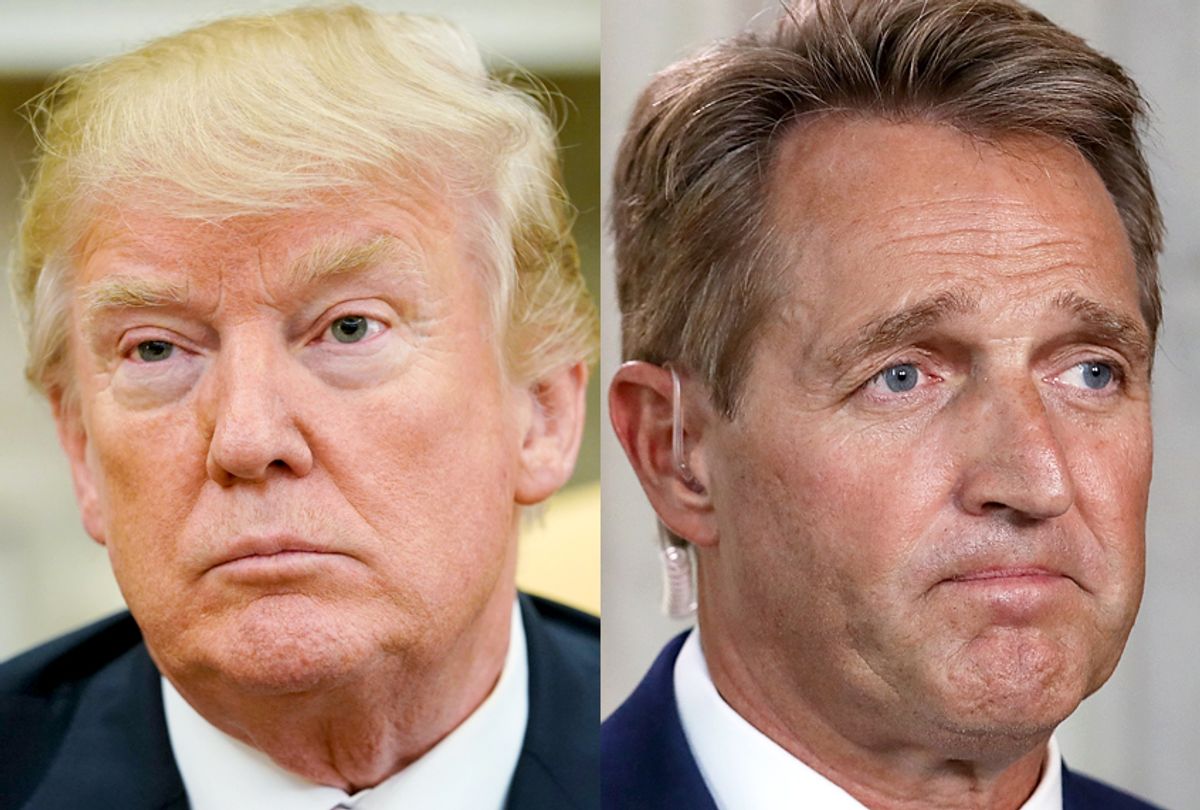 President Donald Trump just tweeted a political ad so blatantly racist that, if it had been posted by a political figure other than the President of the United States, Salon would not link to it. Unfortunately, because Trump is the president, it is necessary that Americans see the tactic he is supporting in order to keep Republicans in control of Congress after Tuesday's elections.

The ad shows an undocumented immigrant named Luis Bracamontes grinning and saying "I killed [expletive] cops" during a court hearing. He then adds, "They're [expletive] dead. I don't [expletive] regret that [expletive]." Even more ominously, he vows to break out of prison soon in order to kill more police officers and insists that his only regret is having killed two police officers instead of more.

As the video shows Brucamontes grinning and saying all of this, text on the screen says that "Illegal immigrant, Luis Bracamontes, killed our people!" Throughout the video additional text appears on the screen saying "Democrats let him into our country" and "Democrats let him stay." The video then cuts to shots of the Central American migrant caravan walking toward the US-Mexico border, as well as one migrant who says that he wants a pardon for his felony conviction of attempted murder. Another line of text then says, "Who else would Democrats let in?"

Finally, the ad closes on an image of Brucamontes' grinning face along with the line, "President Donald J. Trump and Republicans are making America safe again!"

Karen Tumulty, a political columnist for The Washington Post, tweeted that "Trump’s new ad is profoundly racist. I refuse to link to it."

Al Cardenas, a conservative activist who works for the law firm of Squire Patton Boggs and in the Advocacy Group at Cardenas Partners, tweeted that "this ad, and your full approval of it, will condemn you and your bigoted legacy forever in the annals of America's history books."

Democratic National Committee Chairman Tom Perez appeared on CNN on Wednesday and told anchor Chris Cuomo, "This is fear mongering. They're hemorrhaging, Chris, on the health care issue. Health care is the number one issue in this country. ... They can't talk about those (issues) because they're on the wrong side."

He added, "His dog whistle of all dog whistles is immigration. This has been Donald Trump's playbook for so long."

Perez also argued that, instead of Trump trying to resolve the migrant crisis by working with the Central Americans' home countries, he was instead making matters worse by vilifying the victims.

"The way you solve this problem is by building relationships with countries in the region. But when you demonize Latinos every day, you make it harder to solve these problems. That's why you see failures in immigration policy under this administration, because nobody wants to work with our country because you're constantly calling Mexicans 'thugs' and all these other atrocious names. That's why they can't do it," Perez told Cuomo.