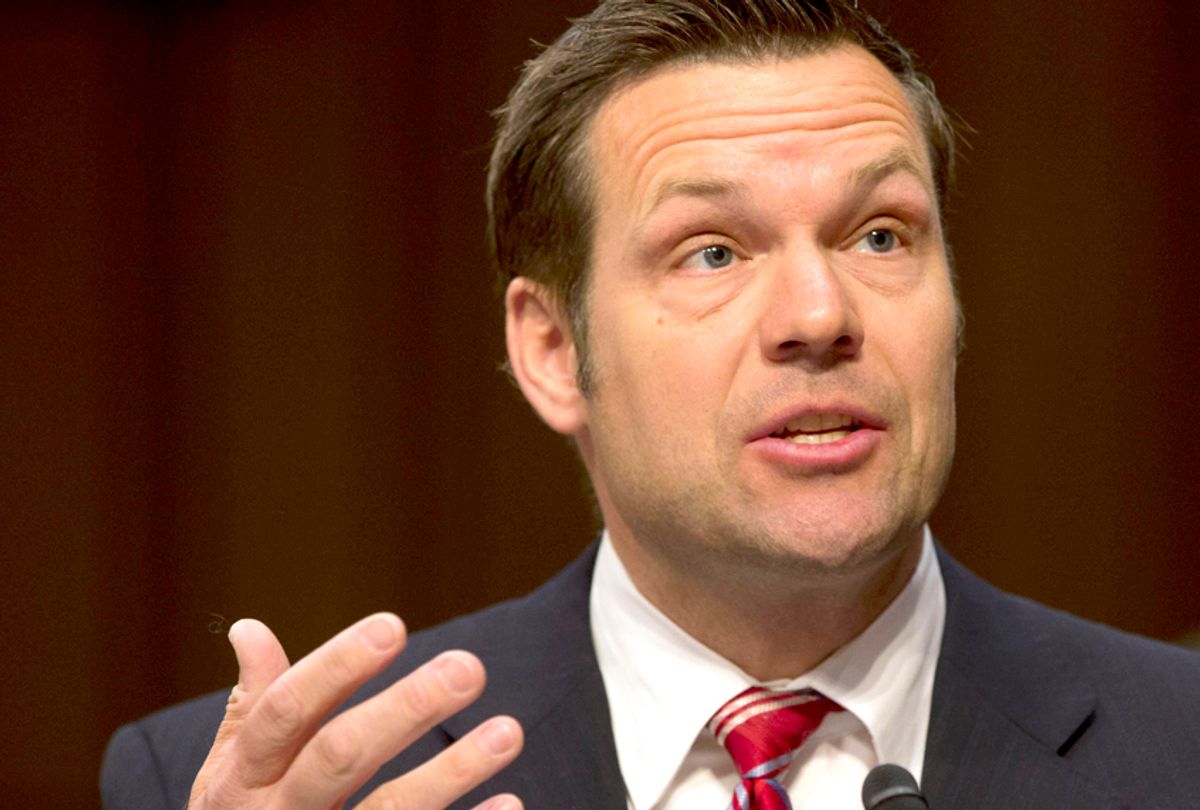 For the second time in less than two weeks, a major independent has endorsed a Democrat in a red state governor's race in order to stop a right-wing Republican from winning. This time around, the GOPer being hopefully thwarted is the king of voter suppression himself, Kansas Secretary of State Kris Kobach.

Tim Owens, a former Republican state senator who worked as campaign treasurer for independent gubernatorial candidate Greg Orman, resigned from his position in order to endorse the Democratic candidate, State Senator Laura Kelly, according to the Kansas City Star. In a statement released by Kelly's campaign, Owens explained that "I’ve been a friend and colleague to Greg Orman for several years. I supported his run for Senate in 2014 and until today I supported his run for governor. However, this is a critical election for Kansas. We cannot risk the future of our state."

He added, "This decision was very difficult for me, but I have to put Kansas first."

Orman responded to the news of Owens' resignation by explaining in a statement, "I wish Tim well, but have told him that my campaign is about the people of Kansas, not about establishment figures in Topeka. As I’ve said since day one, I am committed to the tens-of-thousands of voters who support me and who are sick and tired of the status-quo."

It is unclear whether Owens' resignation will make a difference in the race, but certainly, it makes a statement. Kelly and Kobach are locked in a tight election with polls consistently showing them within one percentage point of each other, leading to concerns that Orman's presence as a third-party alternative could draw more votes away from Kelly and thereby result in Kobach's victory. Kobach, it should be noted, is best known for his support of a number of voter suppression tactics (such as restrictive voter ID laws and working on President Donald Trump's since-disbanded voter fraud commission) and for policies that persecute undocumented immigrants. He also, according to Salon's Heather Digby Parton, "served in the Bush administration and was instrumental in the implementation of the National Security Entry-Exit Registration System, the post 9/11 requirement that all Muslims and Middle Eastern citizens in the country on visas register and file their fingerprints with the government."

Kobach is also having an influence on elections in other states. As journalist Greg Palast told Salon earlier this month, Kobach's methods for suppressing voters have been used in states like Georgia, which like Kansas is a deep red state where a Democratic candidate for governor, Stacey Abrams, is within striking distance of actually winning over the Republican candidate, Georgia Secretary of State Brian Kemp.

"Kemp admits he gave Kobach the state’s entire voter file and got back a 'hit list' from Kobach — but Kemp claims he never used it and 'can’t find' the Crosscheck lists," Palast told Salon. "Sorry, Brian, but your deputy admitted to using the list, and even turned over the Kobach list to a reporter you thought was a Republican who would give you glowing publicity. However, the reporter actually worked for me — for the Rolling Stone investigation. Gotcha!"

Owens' decision to endorse Kelly also has echoes of the decision by Alaska Gov. Bill Walker, an independent, to drop out and support the Democratic candidate, former Sen. Mark Begich, over the Republican candidate, former State Senator Mike Dunleavy. Walker explained that he did this because "every decision I have made as your governor, I have made on the basis of what I believe is best for Alaska. With that said, effective today, I am suspending my campaign for re-election as governor."