Defying their overlords, more techies are organizing for affordable housing 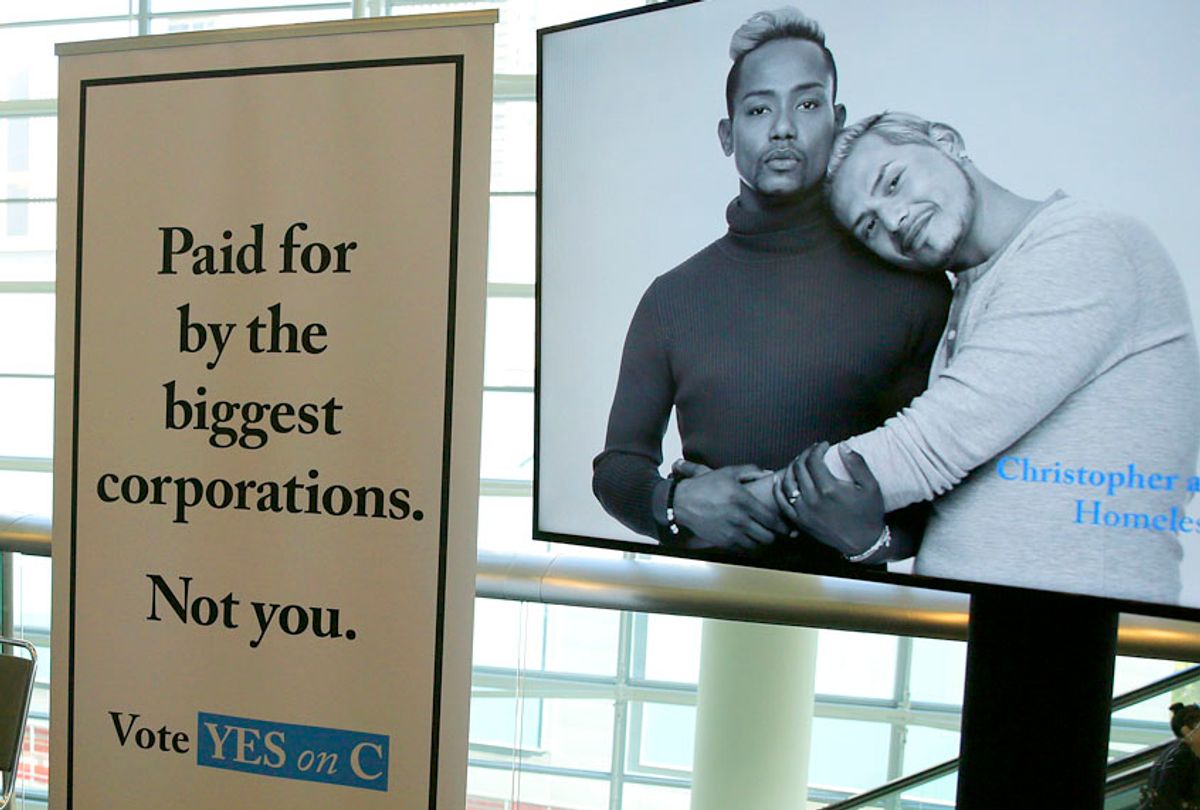 Historically, the politics of Silicon Valley tech workers have generally aligned with the politics of their bosses and companies. Yet a nuanced debate over a housing-related ballot measure funded by a tax on wealthy businesses suggests that a rift is growing between coders and founders' politics.

If it passes next week, San Francisco's Proposition C would raise the gross receipts tax by an average of 0.5 percent for businesses that earn more than $50 million a year. As a result, nearly $300 million would go toward homelessness initiatives.

Though it may seem like a progressive no-brainer initiative to many, the proposed measure has launched a fiery public debate among the tech elite. Billionaires like Jack Dorsey, the CEO of Twitter and Square, opposes the measure; Salesforce CEO Marc Benioff supports it. The two have publicly sparred on Twitter, but among his fellow billionaire friends Benioff is an outlier. Campaign filings tell an all-too-familiar story: the one percent don’t want to be taxed more, while many of their middle-class underlings are supportive of the measure. As far as small-dollar donors go, engineers from Square, Dropbox, Stripe and Apple have contributed as individuals, despite the opposition of their companies' C-suite.

“We know that tech workers and companies want to invest in the communities that they work and live in — and we have seen that reflected with the sheer number of volunteers and donations,” Sam Lew, the policy director of the Coalition on Homelessness and campaign manager of “Our City, Our Home, Yes on C,” told Salon.

Evan Owski is a software engineer and volunteer for the "Yes on C" campaign. He said even though being an engineer is his day job, homelessness has been important to him for quite some time.

“It is very obvious when you move to San Francisco what a massive problem it is and how many people are suffering,” he said.

As a member of the local chapter of the Democratic Socialists of America, who have been active in housing rights activism in the Bay Area, Owski started working with the Coalition of Homelessness organization a little less than two years ago. Owski said that the campaign donations for and against Prop C are telling for what they say about where the one percent stand, and where the rank-and-file workers stand.

“$100,000 donations aren’t coming from rank and file workers,” he said. “They’re coming from CEOs and massive companies pretty much exclusively.”

Dorsey has contributed $75,000 to the campaign opposing the measure, “No Plan, No Accountability, No on Prop C,” which is sponsored by the San Francisco Chamber of Commerce, according to campaign filings. Benioff and Salesforce dominate the list of of big donors supporting the measure: collectively, they have contributed more than $5 million.

“I think you have to distinguish between what the rank and file workers are doing and the managers are doing,” Owski added. “Often times there are widely divergent views between those two, and I think as far tech employees getting involved in homelessness and other issues, there has been a growing politicization, and I think people are beginning to realize that being neutral and not being involved is a position in and of itself.”

As my colleague Keith Spencer explained in light of this week’s Google walkout: “White-collar tech employees like those at Google are in a unique position to influence their corporations' business decisions. Software engineers are in scarce supply, and Silicon Valley knows it can not afford a mass exodus of programmers due to corporate malfeasance. As such, tech companies are under much more pressure to change corporate policy under pressure from employees.”

Perhaps the same can be said about corporate activism in social policies, too.

Darby Thomas is a product designer who moved to San Francisco for a tech job. She also got involved in the “Yes to Prop C” campaign by way of the Democratic Socialists of America San Francisco chapter.

Thomas told Salon one reason why tech workers are getting involved in the campaign is because it is part of the industry’s responsibility. From gentrification, to rising rent costs, the industry has played a role in making the city increasingly unaffordable, in addition to offering jobs to white collar folk with only a certain skill set.

“The tech industry has to own up to the role it’s played,” she said.

But perhaps what has motivated some tech workers the most is their lack in trust in upper management.

“I’m being well compensated now but how long will that last?” she said. “I have a sense I’m closer to homelessness than a jackpot liquidation.”