Joe Donnelly and Heidi Heitkamp go down: Did Brett Kavanaugh sink Democrats in the Senate?

Heitkamp's defeat was expected, but Joe Donnelly's shock loss puts an end to talk of a Democratic Senate 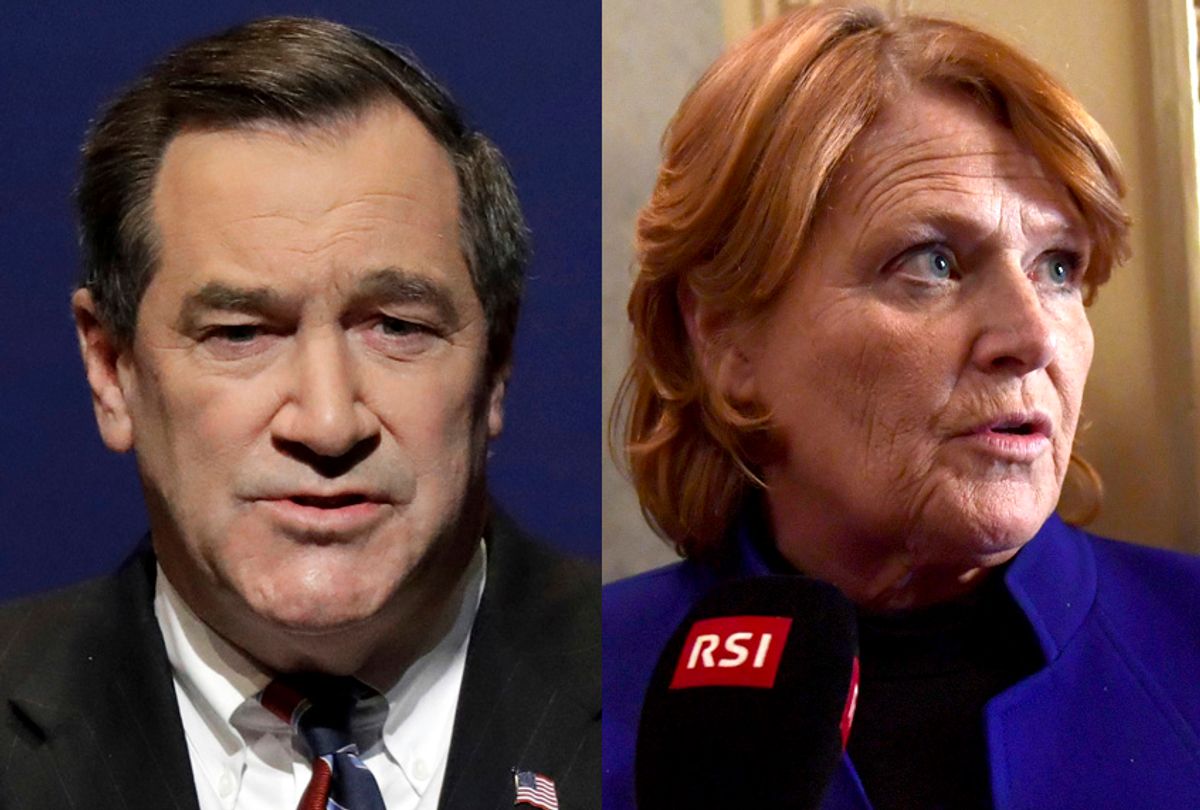 Joe Donnelly and Heidi Heitkamp, two Democratic senators running for re-election in red states that Donald Trump carried by double digits, fell to Republican challengers on Election Day. Both incumbents had voted against the confirmation of Supreme Court Justice Brett Kavanaugh, the conservative judge embraced by Trump's base who squeaked through the Senate despite multiple allegations of sexual misconduct.

Heitkamp, who was the first female senator from North Dakota, faced an intense re-election battle against Rep. Kevin Cramer, her Republican rival, in a state Trump won by 36 percentage points in the 2016 election. Heitkamp won her 2012 race by just a single percentage point. She trailed Cramer in every poll released within the last two months before Election Day.

Republican Mike Braun is the projected winner over Donnelly in Indiana, and his victory may suggest a new political reality for Democrats in red heartland states. Trump carried the Hoosier State by 20 points two years ago. Donnelly leaves the Senate after just one term.

Heitkamp's defeat in North Dakota comes despite extraordinary fundraising success in the final stretch of the 2018 election cycle. According to disclosure forms filed with the Federal Election Commission, Heitkamp raised $12.5 million between Oct. 1 and Oct. 17 — a fundraising spike that clearly corresponded with her's high-profile decision to vote against Kavanaugh's confirmation. Prior to the recent filing, Heitkamp had brought in $3.8 million during the entire July-to-September fundraising quarter. In addition, about $7.5 million of the $12.5 million total came from small-dollar donors, the disclosure showed.

In the wake of her decision to vote against Kavanaugh, polling showed Heitkamp -- a centrist who was viewed as a pivotal swing vote -- trailing Cramer by double digits. President Trump devoted much of his final campaign push to help Donnelly's and Heitkamp's challengers. He visited Indiana twice in four days to campaign for Braun in the lead-up to Election Day.

Heitkamp faced other challenges throughout her bid for re-election. In the final days of the 2018 campaign cycle, the American Civil Liberties Union warned that a new Republican voter ID law could targeting Native Americans — a core element of Heitkamp's support — and suppress Democratic turnout in North Dakota. The ACLU warned that tens of thousands of Native Americans in North Dakota might not be able to vote, because tribal IDs generally do not include conventional home addresses, as required under a new voter ID law. More than 5 percent of North Dakota's population is Native American. The ACLU pointed out that even a small number of rejected ballots could make a "big difference" in a state that has less than 800,000 people. Heitkamp won her first race by just 3,000 votes – after polls had her trailing significantly leading up to the election – in large part thanks to Native American voters.

A month before Election Day, journalist Greg Palast reported that 469,000 voters in Indiana had been removed from the voting rolls — and that at least 20,000 had lost their right to vote when a court order was blatantly violated. Palast further claimed that the number of number of Indiana voters who would not be able to vote was actually much higher than that, and that voter disenfranchisement could make the difference between victory and defeat for Democrats in Indiana.

"We are looking at dead-heat races in Nevada, Indiana and Arizona where you shouldn't be surprised to see a 'red shift,' that is, Republican victories in races where exit polls show a Democratic win. That's explained by provisional and absentee ballots rejected (because of registration or ID or other problems) — people can tell pollsters how they voted but not if their vote was counted," Palast told Salon. "The fact that millions of voters lost their registrations without notice that they’d been purged means that Democrats may have effectively lost any chance of winning key elections before a single vote is cast."

Republicans also outpaced Democrats in early voting in the Hoosier State, by a margin of 51 to 39 percent. As in other Senate races this cycle, that's unusual. The party that controls the White House during a midterm election usually expects to suffer from dampened voter enthusiasm and a consequent decline in turnout.