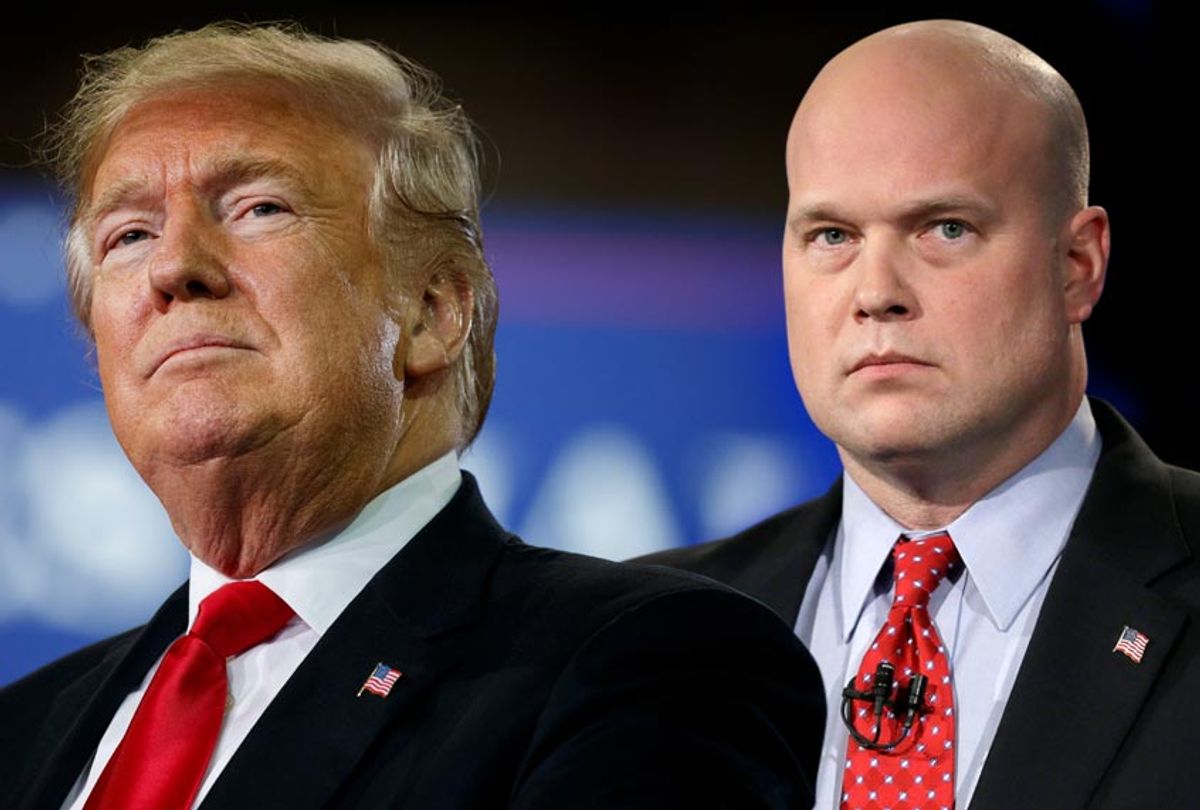 President Donald Trump on Friday attempted to defend his decision to hire GOP partisan Matthew Whitaker as acting attorney general by claiming he doesn't know him — a lie that was quickly revealed.

"I don't know Matt Whitaker," Trump told reporters at the White House South Lawn on Friday. "He was always extremely highly thought of and still is," the president said to explain his decision to hire Jeff Sessions's chief-of-staff as his successor, against protocol.

As the nation's top law enforcement official, Whitaker will have oversight over the ongoing special counsel investigation into allegations of collusion between Trump's 2016 presidential campaign and the Russian government — even though he's previously railed against it, penning an op-ed titled "Mueller's investigation of Trump is going too far."  Democrats in the House and Senate have already called on Whitaker to recuse himself from the probe — something Sessions had done but which Trump had seena as betrayal.

Trump on Friday, however, told reporters that he "didn't speak to Matt Whitaker" about the ongoing investigation into election interference, which Whitaker will now oversee. "When Sessions left what I did very simply is take a man who worked for Sessions," Trump said. (He tapped Whitaker from his post as Sessions' chief of staff.)

"Whitaker has a great reputation and that's what I wanted," the president said.

Multiple reports have revealed that Whitaker has visited the White House dozens of times has briefed the president many times. Trump also told Fox News last month, "I can tell you Matt Whitaker is a great guy, I know Matt Whitaker."

When a reporter asked the president if he "wanted Whitaker to rein in Mueller," he called it a "stupid question."

Although Trump denied taking Whitaker's pulse on the Mueller investigation, he didn't have to. Throughout his time as Sessions' chief of staff, Whitaker demonstrated his willingness to stand by the president — most notably by defending him on television and arguing in opinion pieces that any investigation into Trump's personal finances would constitute "a red line" that Mueller is "dangerously close to crossing." Whitaker is a Trump loyalist — and the president has made it clear that he favors loyalty over nearly everything else.

Trump also pushed back on criticism from Democrats and conservative legal scholars who argue that it is illegal and unconstitutional for Whitaker to serve as acting attorney general because he was not confirmed by the Senate. Trump lashed out at George Conway, the husband of White House counselor Kellyanne Conway who has emerged as an outspoken critic of Trump, for an op-ed he wrote in the New York Times with former solicitor general Neal Katyal, in which the pair criticized the president's appointment of Whitaker and argued that it is "unconstitutional."

"Mr. Whitaker's installation makes a mockery of our Constitution and our founders' ideals," the two wrote. "President Trump's installation of Matthew Whitaker as acting attorney general of the United States after forcing the resignation of Jeff Sessions is unconstitutional. It's illegal. And it means that anything Mr. Whitaker does, or tries to do, in that position is invalid."

Trump called the prominent lawyer "Mr. Kellyanne Conway"  on Friday and told reporters that "he's just trying to get publicity for himself" when asked about the op-ed.

The president also said that Whitaker was "confirmed at the highest level," and pointed to his 2004 confirmation to be a federal prosecutor in Iowa.

Trump added, "Mueller was not Senate confirmed. ... so don't tell me about Whitaker."

Mueller, however, reports to Senate-confirmed appointees. He has been reporting to deputy attorney general Rod Rosenstein, who was confirmed by the upper chamber. Trump also claimed that the Republican-controlled Senate didn't confirm Mueller because of conflicts of interests, which he did not specify, but the White House has previously pointed to disputes over fees at a Trump National Golf Club in Virginia that promoted Mueller to resign his membership.

Trump's skepticism over Mueller's appointment comes as Democrats have claimed that the president is attempting to assume control of the special counsel investigation.

With Sessions now out, the president must choose the nation's next top law enforcement official — and there are six people he is reportedly considering to replace him. The list includes the former Kansas Secretary of State and right-wing activist Kris Kobach and Chris Christie, the former governor of New Jersey.

On Friday, Trump said, "I like Chris Christie, but I have not talked to him," although the former New Jersey governor was spotted on Thursday at 1600 Pennsylvania Ave. He told reporters, "I did not see Chris Christie yesterday, I heard he was in the White House."