Jeff Sessions' final act as attorney general was a doozy 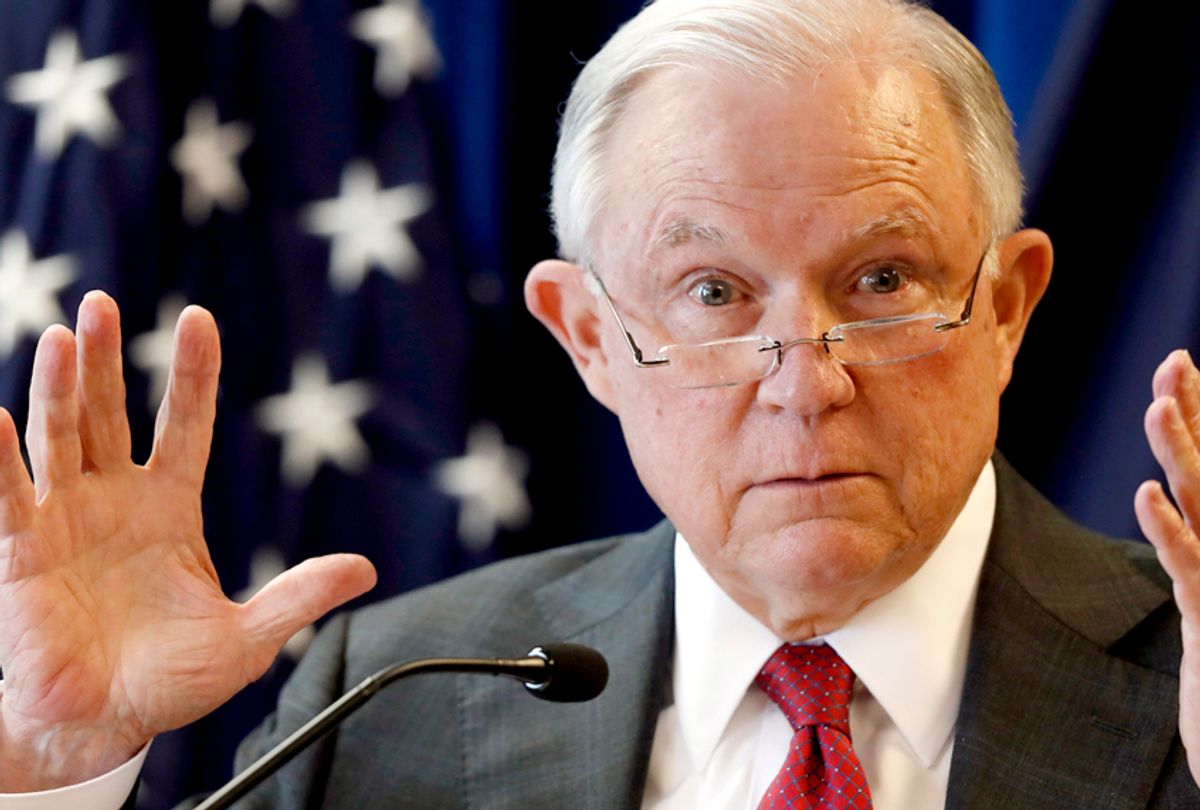 As the New York Times first reported, the new memorandum, announced by the Justice Department Thursday, limits the use of what's commonly referred to as consent decrees, which are court-enforced deals between the Department of Justice and local governments, used by the Barack Obama administration more than a dozen times, to enact reform in some of the most notoriously violent and corrupt police departments.

Sessions' termination on Wednesday — one day after the midterm elections — prompted protests across the country under the guise of #ProtectMueller, with demonstrators raising concerns over the status of special counsel Robert Mueller's investigation into the Trump campaign. The president appointed Matthew Whitaker as interim attorney general, who has publicly undermined the investigation in op-eds.

But Session's last-minute order punctuates a career-long crusade to roll-back civil rights and shows just how nebulous Trump's presidency is, that one day after Sessions' exit — a man who Coretta Scott King described as indifferent "toward criminal violations of civil rights laws," in a lengthy letter opposing his federal judicial nomination in 1986 — thousands, in many states, took to the streets in fear of what's to come.

When Sessions first took office, he ordered a sweeping federal review into existing agreements, including those entered into with police departments in Baltimore, Chicago and Ferguson — cities that emerged into the national spotlight for horrific police killings of black men, further launching the Black Lives Movement and other forms of protest against systemic police brutality.

In this apparent follow-up to the review, Sessions "imposed three stringent requirements for the agreements," according to the Times. "Top political appointees must sign off on the deals, rather than the career lawyers who have done so in the past; department lawyers must lay out evidence of additional violations beyond unconstitutional behavior; and the deals must have a sunset date, rather than being in place until police or other law enforcement agencies have shown improvement."

The Times' report continued: "The document reflected Mr. Sessions’s staunch support for law enforcement and his belief that overzealous civil rights lawyers under the Obama administration vilified the local police. The federal government has long conducted oversight of local law enforcement agencies, and consent decrees have fallen in and out of favor since the first one was adopted in Pittsburgh more than two decades ago. The new guidelines push more of that responsibility onto state attorneys general and other local agencies."

In the memo, Sessions acknowledged that consent decrees are at times necessary, but he expressed concern about their infringements on the sovereignty of local governments, seemingly a higher priority than the safety and well-being of minority residents most vulnerable to unconstitutional police interactions. "In light of the foregoing concerns," the memo says, "the Department should exercise special caution before entering into a consent decree with a state or local governmental entity."

"Sessions has raised the bar for what needs to be demonstrated in order to impose a decree and the time period it can endure, which is against the interests of community residents," writer and researcher Tim Tolka told Salon. He's the author of "Blue Mafia: Police Brutality and Consent Decrees in Ohio."

"My two case studies, Warren and Steubenville, Ohio were struggling with lawsuits, public pressure, and negative press for decades, but they couldn't turn things around. Only the DOJ's intervention and imposition of a monitor for five, and even eight years in the case of Steubenville, was sufficient to impose order and discipline," he added.

The new guidelines comes after the Justice Department has already curtailed investigations into the police in Louisiana and Chicago, initiated during Obama's tenure. Sessions also formerly opposed a consent decree with Chicago's police department, even though a year-long investigation into the department found rampant excessive force and civil rights abuses aimed at black and brown residents.

"Colossal mistakes have been made by politicians and leaders that have had particular catastrophic consequences for the people of cities like Chicago, Baltimore and St. Louis," Sessions said in a speech before law enforcement in September. "If you want more shootings and more death, then listen to the ACLU, Black Lives Matter or Antifa. If you want public safety, then listen to the police professionals who have been studying this for 35 years."

Last month, Trump echoed these same talking points when delivering a speech to law enforcement in Florida, and he advocated for the return of stop-and-frisk in Chicago, a police tactic that is widely seen as racially biased and unconstitutional.