Republican derangement: A party I used to respect has gone off the cliff

I grew up among virtuous Republicans inspired by what was best in the Puritan tradition. That party is now gone 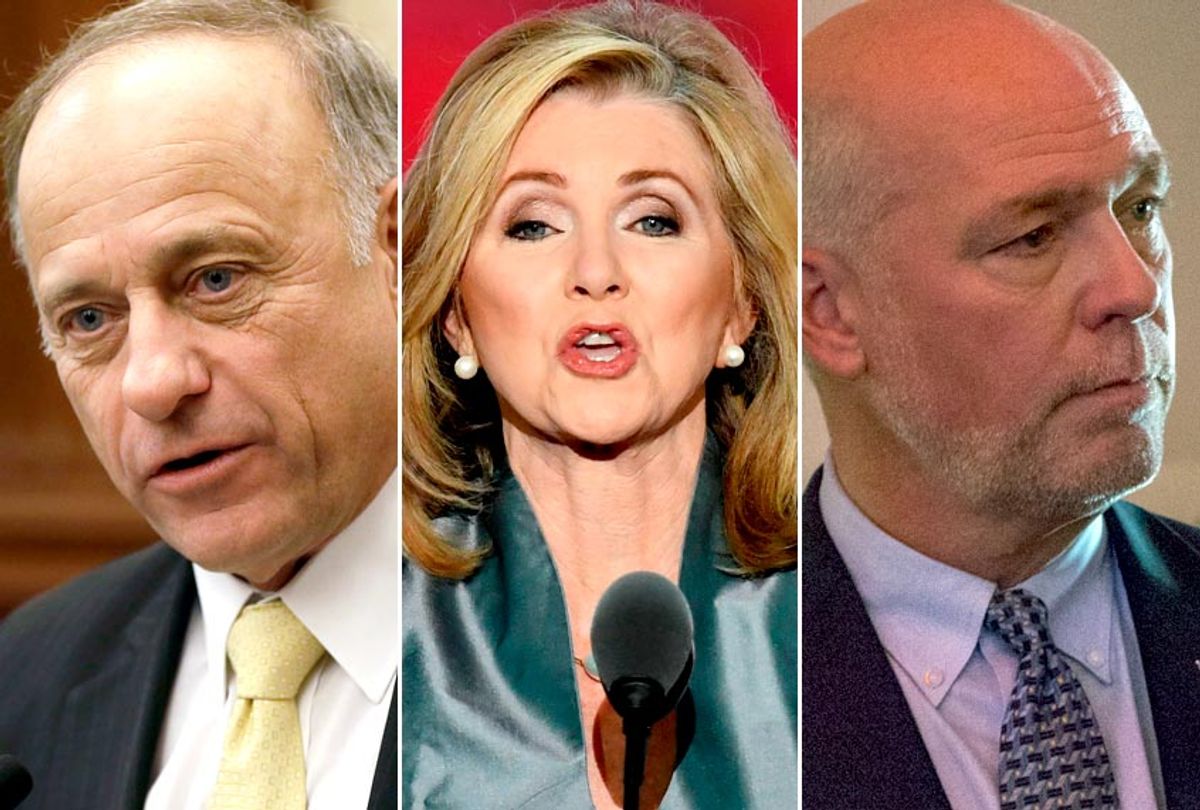 I grew up under the spell of virtuous, civic-republican (small “r”) Republicans in Massachusetts: Elliot Richardson, the state’s attorney general and lieutenant governor, who later resigned as U.S. Attorney General rather than follow Richard Nixon’s order to fire Watergate special counsel Archibald Cox in 1973; Kingman Brewster Jr. (born in my western Massachusetts hometown and president of Yale when I was a student there); Gov. Frank Sargent, and many others. I interned for one of them, Rep. Silvio Conte, about whom I reminisced recently with Bill Moyers, Lyndon Johnson’s press secretary at the time, who praises Conte’s bipartisanship.

I wasn't surprised when, as late as 2006, Massachusetts Gov. Mitt Romney -- then still a moderate, moral Republican -- worked with Democrats to deliver his effective, early model for Obamacare. That was 10 years before the national party (and, with it, Romney) became the antithesis of what I grew up with -- although, to be fair, Massachusetts has just re-elected moderate Republican Gov. Charlie Baker.

All this came back as I watched Tuesday’s election returns, probably because I teach an undergraduate seminar  on “Journalism, Liberalism, and Democracy” that examines not “current events” like the election but “undercurrent events” -- powerful, sometimes dark upheavals in capital, technology, demography and nationalist reactions that are disrupting Americans’ dubious ways of balancing “free markets” and spiritual salvation, leaving a vacuum into which nihilism has swept, destroying even our houses of worship and Washington’s house of cards.

Watching the returns, I lamented that today’s Republicanism is goose-stepping millions of Americans over a cliff behind a shameless draft-dodger, tax cheat and pussy-grabber. But then still-darker news arrived from Nevada that some Republicans have descended from nihilism to necrophilia:

Hof, a reality-television star touted as the state’s most well-known pimp, ran as an outspoken Republican for Nevada’s Assembly District 36 before he died in October at the age of 72. Due to state law, however, he remained on the ballot and the state’s leading GOP officials had urged voters to still cast their ballots for him in order to deprive Democrats of the chance to flip the seat

Granted, Hof’s was only a state legislative election (and – dare I say this? – it was only Nevada, not the holy Puritan Commonwealth of Massachusetts.) But it cast an eerie light on the same night’s victories by Greg Gianforte, the journalist-assaulting Montana congressman, and Steve King, his racist colleague from Iowa, who were both re-elected on Tuesday.

It’s not enough to observe, however rightly, that Republicans have been deranged by the much ballyhooed sins of what a concerted conservative campaign derides as "Social Justice Warriors," what Rush Limbaugh calls “feminazis,” what Trump and his minions call invading Mexican rapists and terrorists, and other such bogeymen. Only a few of those are carriers or casualties of what’s generating Trumpism itself: the disease of turbo-marketing that’s reducing American education, entertainment, social media, politics and the dignity of work itself to levels determined by a mania to maximize profits and shareholder dividends, no matter the social costs.

The few conservatives who still hope to advance the ordered, principled republican liberty that my Massachusetts exemplars upheld can no longer convincingly reconcile that hope with their movement’s and the Republican Party’s obeisance to every whim and riptide of corporate, global capitalism that’s destroying the liberty they claim to cherish and that’s generating a lot of what’s wrong in the bogeymen they vow to defeat.

Market madness and its deceits go back to the Puritan origins of Massachusetts, but since the early 1980s that madness has been not just resurgent but decisive in ways it hadn't been since 1929. Ronald Reagan and the two Bush presidents may look good next to Trump, because at least they played the grace notes of ordered liberty. But they contradicted themselves, and not just naively.

In 1981, James Lucier, a top assistant to right-wing North Carolina Sen. Jesse Helms, explained their worldview to the New Yorker’s Elizabeth Drew, saying that the liberal “leadership groups that run the country — not just the media but also the politicians, corporate executives … have been trained in an intellectual tradition that is … highly rationalistic.”

That training — the liberal education that George W. Bush, his 2004 opponent John Kerry and I encountered as we overlapped at Yale in the 1960s — “excludes most of the things that are important to the people who are selling cars and digging ditches,” Lucier explained. “The principles that we’re espousing have been around for thousands of years: The family …, faith that … there is a higher meaning than materialism. Property as a fundamental human right … and that a government should not be based on deficit financing and economic redistribution …. It’s not the ‘new right’ — people are groping for a new term. It’s pre-political.”

Some things should be pre-political. A liberalism that dismisses religious and even patriotic sentiments as dangers to liberalism itself will always be surprised when they come back to bite it. It shouldn’t underestimate or look down on their necessity and their power.

Yet Aristotle was right to warn that humans who lose the art and discipline of “the political” become lower than beasts. When conservatism talks about the sanctity of property and, at the same time, about the dangers of materialism and of public-deficit financing, both of which it pursues to strengthen plutocrats and to bankrupt Social Security, public education and health care, it opens the vacuum to Trumpian malevolence and corruption. Its “pre-political” anti-politics subverts its own professed ideals of republican self-governance, which should reinforce mutual trust, not dog-eat-dog competition and empty salvific, decadent and scapegoating escapes.

House Democrats’ comeback won’t defeat this perverse ideology and its consequences, which they too have indulged and accommodated. Impeaching Trump wouldn’t cure the disease. Even #MeToo, which has good reason to rejoice over Tuesday’s victories, has equally good reason to worry that shattering a structure’s glass ceilings without reconfiguring its walls and foundations enables victories by Trumpian women such as Tennessee’s next senator, Marsha Blackburn, who calls herself a “hardcore, card-carrying conservative,” and Arizona’s potential next senator Martha McSally (at this writing, that race remains undecided), not to mention legions of conservative noise-machine drones such as Ann Coulter.

The most that the incoming House Democratic majority is likely to accomplish is what the long-lost civic-republican Republicans of my youth gave us – some breathing room and leverage against Lucier’s “pre-political” and Trump’s post-political onslaught. As we try to restructure our society’s walls and foundations (including its philanthropic foundations and its self-celebrating, self-exculpating plutocracy), we can’t count on sexual and ethno-racial “firsts” to reverse sexual and ethno-racial scapegoating.

Swaddled though the old civic-republicans were in their time’s racist and sexist conventions, they did resist scapegoating and opened some doors to the scapegoated: In 1967, Massachusetts elected Edward Brooke, another of its Republicans, the first black U.S. senator since Reconstruction. But what they didn’t do – what we need to do most now – is to stop the disease of turbo-marketing from dissolving the republic that has given its insurgents enough breathing room and footholds to transcend even themselves.