Smart Watch: From "Sally4Ever" to "This Is Us," there's no "eff your feelings" this week on TV

Coming off of another week that's been a week, the shows tap into a range of feels, from repulsion to vulnerability 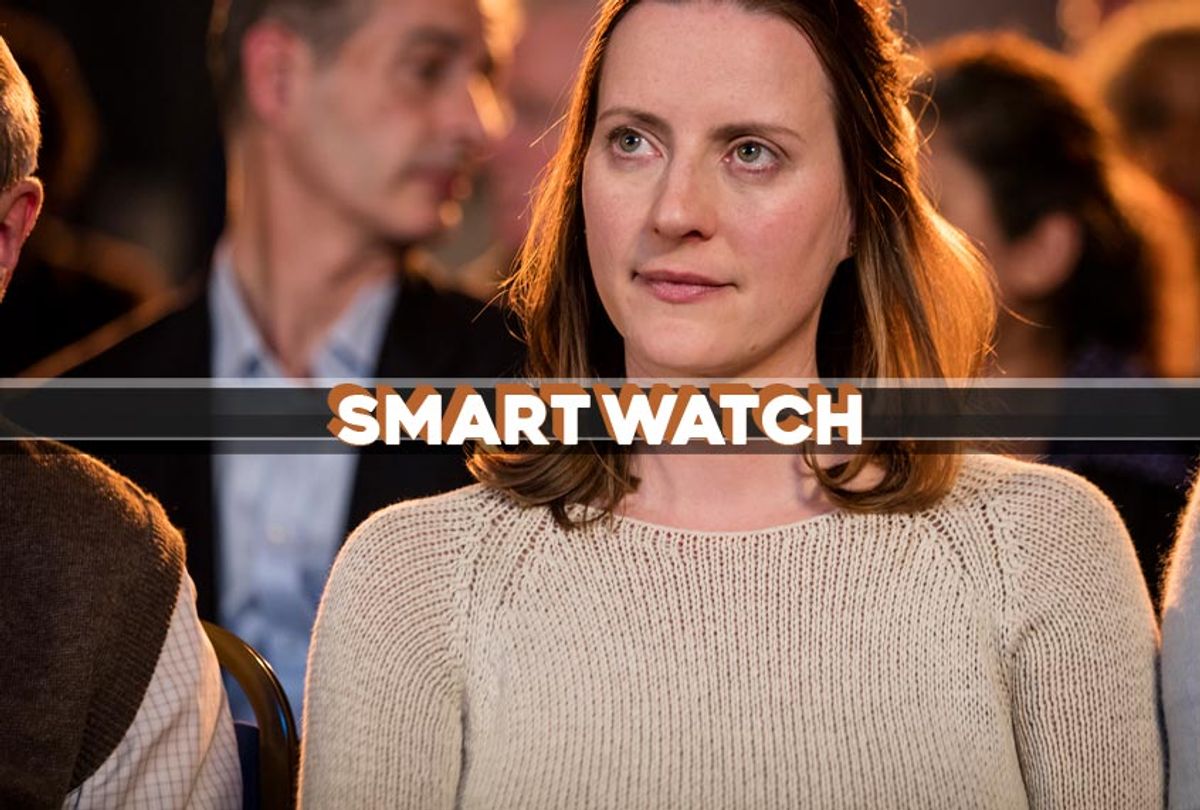 These are emotionally driven times. We receive regular reminders about self-care, perhaps even heeding it. We commit to the sacred concept of “me time” and nod in agreement when our friends rhapsodize about the joy of hygge. Then today's headlines roll over us, letting us know that another bottom has dropped out. Next thing you know, we’re sheet-caking and stress cooking. Yes, many of us have experienced some version of gaining the Freshman 15.

The times also have taken a toll on what we expect from relationships, and comedy, and relationship comedy. The rom-com has returned with a vengeance, even though the concept of lasting commitment feels like a relic of the past. So it was only a matter of time before someone burst that bubble of saccharine fantasy, reminding us that relationships can be as awful as they are fulfilling.

Enter Julia Davis, the creator of the original U.K. version of “Camping,” with the HBO and SkyAtlantic co-production “Sally4Ever,” premiering Sunday at 10:30 p.m. Should that title sounds like a feminist celebration of the self of a woman’s triumphant story of asserting her agency, allow me to warn you it is not. The way Davis introduces her eponymous heroine make the title seem to refer to a punitive sentence as opposed to a love note’s sign-off.

Few will envy the mild-mannered Sally (Catherine Shepherd) when we first meet her: The series opens with our heroine and her parents (David Cann and Georgie Glen) sitting in a sparsely occupied auditorium politely and watching Sally’s lover of 10 years, David (Alex Macqueen), perform as the lead vocalist in a cappella group that covers pop hits.

It is not a joyful experience, but it does announce who David is: a talentless and terrible human. His music group is terrible, too. They don’t actually pay homage to, say, George Michael’s “Faith” so much as drag it down to a basement’s secret kill room and hang it on a meat hook. The performance itself is a crime. As if that’s not bad enough, all the while Sally’s mother is berating her about the declining quality of her eggs, you know, just dropping out of her every month.

Obviously Sally is not living her best life, but she’s not doing much to change it either . . . until she crosses paths with sexpot Emma (Davis). To a middle-aged woman with a dull-as-gray-water day job, Emma seems like the ultimate rock and roll fantasy. So Sally takes a leap for once in her life and secretly pursues her.

At this point “Sally4Ever” parodies of every sexual awakening indie movie where a woman stuck in a dead-end existence suddenly feels her body come alive at the sight of another woman. And Davis makes sure we understand why Sally would be drawn to Emma — or, well anybody other than David.

But she soon implodes that dream, staging one of the most over-the-top, hilariously unsexy girl-on-girl scenes in the history of television before dunking us into the reality that Emma is a horrendous succubus.

With “Sally4Ever” Davis once again mines the comedy in selfish behavior, only this time instead of having relatively staid characters terrorized by one or two narcissists she presents a woman beset on all sides by dysfunctional personalities intent on shaping her life for her. But she also uses that scenario to put her only slant on the concept of cringe comedy, moving that brand of humor deeper into the territory of repulsiveness.

Here’s the deal with the things that make us recoil: the line is always moving. Today’s crass is tomorrow’s commonplace. With each new season a film, fashion trend or TV series presses against edges, breaking or dulling them.

Although Davis draws our focus with her character’s outrageous selfishness, Shepherd is tasked with carrying “Sally4Ever” simply by reacting to all the attention in a way any sensible person would, which is to withdraw into her invisible shell and hope all the unpleasantness passes.

Her subdued performance is a welcome counterbalance to Emma’s audacious egomania and David’s simpering foolery. Macqueen, by the way, deserves a thumbs up for taking the term “milquetoast” and making it more repellent than boring. His strange sexuality is . . . really something.

One hopes, if only for relief’s sake, that Sally will emerge from this experience by choosing herself. That tends to be the standard message of rose-colored cinematic trifles. Here, though, that decision could be made less out of a commitment to self-confidence and care than survival. That, too, we understand.

“Sometimes”: “This Is Us” returns Tuesday, November 13 on NBC

One strange and some might say dangerous outgrowth of this era is the aggressive dismissal of feelings by some political camps. The honoring of emotion is considered by some as a weakness, a notion fueling the false pejorative of “snowflake.”  What’s most bizarre about this the tendency of the people hurling that term to be some of the most thin-skinned personalities around.

Also, there’s knowing that “This Is Us,” returning Tuesday at 9 p.m., is the most feels-centric series on television and happens to be very popular among conservative viewers, according to surveys conducted by E-Poll Market Research.

Season 3’s central arcs make it easy to see why: The show's male characters tend receive the most extensive psychological development and interior examination. Since its first season, "This Is Us" has grappled with mental health issues mainly through its male characters, starting with Randall (Sterling K. Brown), then this season turning its lens toward Kate’s (Chrissy Metz) husband Toby (Chris Sullivan) and his struggles with severe depression.

Of course, the core of the series has always been patriarch Jack Pearson (Milo Ventimiglia), whose spirit still guides the family even though he’s long gone. In this new episode Kevin (Justin Hartley) heads to Vietnam to find out more about his father’s past — and more to the point, what secrets he may have left in that country during the war.

The way this series portrays human frailty and imperfection, especially as its male characters express those traits, makes it unique among TV dramas. But the secret ingredient in its cry catalyzer has always been Jack and the writers’ refusal to lionize him.

The Vietnam War transformed him as well, and in ways the series is only starting to reveal in flashbacks that provide more context of his identity as a father and a husband, and how surviving horror informs who we see onscreen.

Series that deal with mortality and the blizzard of emotion surrounding it aren’t the easiest pitch. That’s probably why Chuck Lorre’s single-camera dramedy “The Kominsky Method” is airing on Netflix as opposed to cable or network (as if that would even fly).

The series pairs Michael Douglas with Alan Arkin, perhaps the finest streaming comedy team-up since, well, matching Jane Fonda with Lily Tomlin. As acting coach Sandy Kominsky, Douglas easily slides into the role of a man whose tried his best to make a career out of his craft, even scoring a Tony for his best efforts, but whose best days are behind him, leading him to make a career as a professorial drama teacher.

Sandy is so focused on his own life that it takes the death of a dear friend (Susan Sullivan) to make him realize that the most important person of his life, besides himself, is his agent Norman, played by Alan Arkin.

Most of the comedy in “The Kominsky Method” is mined from watching these two come to terms with their aging and all the bodily slips and slides that come with it. But it’s also a series about grief, about being alone and moving on, and how difficult that can be from a male perspective.

Bearing that in mind, it may be excusable that the women get shortchanged in this series, even though Nancy Travis gets to be a charming firecracker at many points throughout the first season’s eight episodes. And as Sandy’s daughter, Sarah Baker ably establishes herself as a grounding foil to Douglas’ bursts of grumpiness and self-importance.

“The Kominsky Method” merits further exploration for other reasons, but at its most basic, it grants the viewer solace in opening themselves to the unglamorous emotional chapters life foists upon us, even to the extent of inviting a re-appraisal of such cinematic schmaltz as “Cocoon.”

Such signposts and how we react to them have to do with the times, I supposed, in the universal sense or the personal.  The good news is there’s plenty of stuff on TV that lets us know that it’s OK to feel alone, even though we’re far from alone in our feelings.