Smart Watch: Why you should watch Jennifer Garner play a total jerk in "Camping" 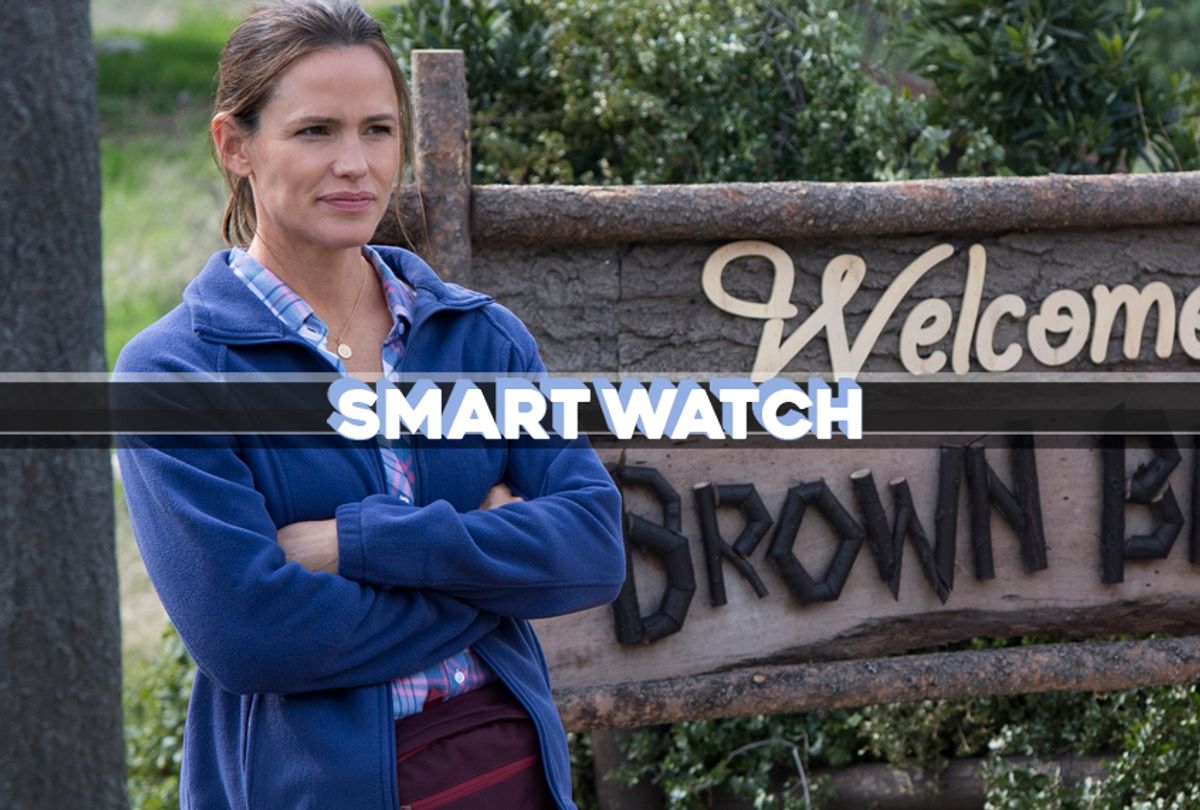 Irritating TV series have their uses. Some of them are even addictive, albeit in ways that defy all common sense. Honestly, there’s no good reason for a person to keep on watching anything that vexes them. Never in the history of television has such a variety of alternatives to annoying programming been easily accessible. And yes, you snobs, of course there’s the off button.

That said, rarely does one encounter an irritant as potent as “Camping,” HBO’s new alleged comedy from Lena Dunham, Jenni Konner and John Riggi, debuting Sunday at 10 p.m. “Camping,” based on Julia Davis’ British series, is made even more alluring by the presence of Jennifer Garner, whom we’re inclined to enjoy because of “Alias,” and David Tennant, one of the finest versions of The Doctor to ever “Who.”

Do not be fooled: Their characters are extremely concentrated mood allergens, designed to annoy as opposed to entertain. But they’re also prime examples of How Not to Be.

Garner plays Kathryn McSorley-Jodell, an uptight Los Angeles mom who has planned a big 45th birthday celebration for her husband Walt (Tennant) at a camping ground she’s rented “at the Groupon rate.” Kathryn is, in a word, horrid. She is the worst version of an entitled yoga-obsessed urbanite who, one suspects, goes through health scare phases like a flu-sufferer plows through Kleenex.

She constantly whines about the state of her pelvic floor, dissolves into a sputtering fit when the partygoers deviate from her carefully planned schedule of activities and freaks out at any sign that her child may be hurt.

Don’t be a Kathryn. Are you a Kathryn? Then stop. Stop being a Kathryn. (No offense to nice people named Kathryn, by the way. This is not about you!)

Kathryn is the reason people come up with strategies to extricate themselves from bad interactions at parties. You get the sense that her friends would turn down front row seats to a Beyoncé show if they knew she was coming. Hell, Bey herself might even cancel. But even though the proposed get-together is way out in the middle of nowhere, Walt’s friends show up anyway — because, poor guy, right?

Joining the party are George (Brett Gelman) and his wife Nina-Joy (Janicza Bravo) — the only black person in the group and yes, that comes up as part of a minor plot development — and Carleen (Ione Skye), Kathryn’s tragically unfashionable sister.

As a bonus, this scripted equivalent of poison oak also contains Juliette Lewis playing a flighty, loopy counterculture weirdo named Jandice who lives as if the world is her Burning Man playa, brought into the woods by the group’s wayward and recently separated friend Miguel (Arturo Del Puerto).

Now, it must be said that as unbearable as Lewis’ character is, the actress actually salvages “Camping” as far as that’s possible by counteracting Kathryn’s awfulness which, honestly, somebody needs to do. Beyond those two, “Camping” mainly exists as a situational exercise rather than a comedy or a work of art.

“Camping” is what happens when writers with a limited view of life at a certain age realize their worst fears about aging on a page and find a cast to act out those anxieties. Garner’s character receives the most significant development of the bunch, and even she’s two-dimensional at best.

Tennant’s Walt is the archetypal henpecked husband, and although Kathryn and Nina-Joy have a contentious history, Bravo is barely given an opportunity to flesh out her role. The most she’s given to work with is an unfortunately racially-charged moment of thoughtlessness, but even that is acted upon by Gelman’s George.

Ah, but we were talking about the usefulness of a show like this, right? And here it is: “Camping” is a wonderful tool for correcting miserable behavior. It’s an educational film that screams, “don’t be like these people.” In fact, if you have a Kathryn in your life, our condolences. Invite your Kathryn over for a TV night, have a few glasses of wine or some homebrewed kombucha, and inflict a few episodes of "Camping" on your Kathryn. That person will either be delighted — in which case, sorry! — or horrified. If it’s the latter, maybe innocently point out to that person that hey, he or she reminds you of Jennifer Garner.

If they’re like Kathryn, that will be taken as a compliment, because that is how a Kathryn works — he or she will see the behavior of Garner’s character as normal. In all likelihood, said person will zero in on the actor’s impressively buff arms and be very pleased.

Either way, get that person out of your life.

Another irritating quality about people like Kathryn is that they so badly want to be liked, to be on trend. They pander, and that eagerness to please everyone and be up-to-the-minute with the latest everything gives them the appeal of a thirsty gnat.

This is problem plaguing the premiere of the “Charmed” reboot, an hour designed to hammer the new series’ distinctly feminist underpinnings into the audience’s skulls. Fair enough; being a Wiccan certainly isn’t enough to buy anyone empowerment cred.

Thus the Vera sisters, Maggie (Sarah Jeffery) and Mel (Melonie Diaz), are identified as “a social justice warrior” and a graduate student in at Hilltowne University’s women’s studies department, chaired by their mother Marisol (Valerie Cruz). And that’s fine!

Before their mother dies, she delivers unto them a lady-power speech. But only when their long-lost older Afro-Latinx half-sister Macy Vaughn (Madeleine Mantock) shows up do the mystical forces that are their birthright, aka the “Power of Three,” unlock.

The first baddie they knock off is, of course, a total prick, because let’s make sure we get that point across. But — twist! — their mentor, a white lighter, is a white guy named Harry Greenwood (Rupert Evans), whose cover is to be officious new chair of the women’s studies department. Because, one assumes, patriarchy.

Not going to lie to you — the first episode of the new “Charmed” is clunkier than Rose McGowan’s late-‘90s shoe game.  That said, a pilot’s job is to clearly let viewers know what the series is going to be about. And there’s nothing wrong with thoughtful genre storytelling that celebrates female empowerment as opposed to reminding us that we’re living inside the horror show that is Ladies Under Siege 2018.

Therefore, it is not insane to have faith that executive producers Jessica O’Toole, Amy Rardin and Jennie Snyder Urman will calm the heck down in the short order and approach the mythology with the same level of intelligence and heart that Urman poured into the fabulous "Jane the Virgin.”

Then there are the folks in your life who are magnetic enough for someone in your circle to keep around. This ensures that we can never truly escape such people. Fate and other people conspire to make certain they will always be up in your grill.

Now, Baldwin is a case where we can differentiate between the actor and the person. When other people are putting lines in his mouth, he’s terrific — or at the very least entertaining. He’s not the best Trump impersonator, but by “Saturday Night Live” standards, where he plies his poor impression, he gets the job done.

Where Baldwin becomes irritating is when his smooth-jazz personality is poured into an interviewer’s suit. No doubt Baldwin has an audience for his late WNYC podcast “Here’s the Thing,” which aired between 2011 and 2014. That does not make him ready for primetime.

This assessment is not merely in reaction to Baldwin's habit of sharing questionable rainbows with the public, the latest being this gem from The Hollywood Reporter:

Ever since I played Trump, black people love me. They love me. Everywhere I go, black people go crazy. I think it's because they're most afraid of Trump. I'm not going to paint every African-American person with the same brush, but a significant number of them are sitting there going, 'This is going to be bad for black folks.'

Once you’ve digested that, go ahead and picture how that will translate into a talk show format. Or let me just skip ahead here and give you the answer: Not well!

Possibly hoping ABC could capitalize on broadcasting’s loss of Charlie Rose, ABC aired a preview version of “The Alec Baldwin Show” after the Emmys to see how his slightly more attractive version of smugness would play out. What we got was a view of very rich people appreciating each other and sharing their incredibly myopic views on world events that stand to impact them directly, such as sexism in the entertainment industry or #MeToo.

Luckily it’s pretty easy not to be like Alec Baldwin: think before you open your mouth and specifically ask yourself if the world really needs to hear what you have to say about, well, anything. With few exceptions, if you are a famous, rich actor who isn’t speaking knowledgeably — as in, with data to back you up — on behalf of a worthy cause, we probably don’t want to hear what’s rattling around inside your skull. Zip it and skip it.

If Baldwin occupies one side of the irritant scale, Nathan Fillion sits somewhere on the opposite end. Maybe not directly opposite for some people, but he’s as much of a comfort, at least as calamine lotion.

Fillion, cemented early on as the unstoppable Captain Mal Reynolds of “Firefly” fame, is one of those TV stars whose audience will follow him any place he goes. Lately that’s been to the realm of ABC procedurals that go down like pudding. The network knows what it has in Fillion, and Fillion realizes he’s no longer a spring chicken.

Hence we have this very likable cop show about a guy, John Nolan, who hits the mid-life reset button and decides to become a cop. Nolan’s the old guy in a class full of spry youngsters, and this being an ABC series he manages to score a modernist pad with a killer view despite having come from a small town and appearing to originate from modest means.

To the credit of Alexi Hawley, the show’s creator who worked with Fillion previously on “Castle,” there’s a sort-of plausible explanation for this. Everything else that’s questionable, however, we can just write off because, I mean, are you going to quibble with Captain Mal being back in uniform? OK, somebody’s going to.

Here’s the thing: Even if one assessment of “The Rookie” is that it’s a workmanlike but enjoyable cop show that does what cop shows do, and is ably carried by its likable lead, the fact that it doesn’t break new ground is going to irritate somebody.

I can point out a few very apparent annoyances for you. Fillion’s superior Sergeant Wade Grey is played by Richard T. Jones, who is also middle-aged and handsome and should be leading his own show. Instead he’s relegated to the Angry Black Sergeant role seen enough times on TV for it to be a trope.

Also, the climactic moment in the premiere resembles the last segment of “Heat,” which is laying it on a bit thick. But in fairness, refer to the previous observation about pilots in the “Charmed” section.

And as always, one person’s annoyance is another’s concept of great entertainment. All of this is subjective. Maybe you find this entire column irritating. If so, congratulations for making it all the way to the end! You are invited to register your displeasure in the comments section. Do you! Just try not to make your you anything like the main character in “Camping.” Nobody needs more of that.