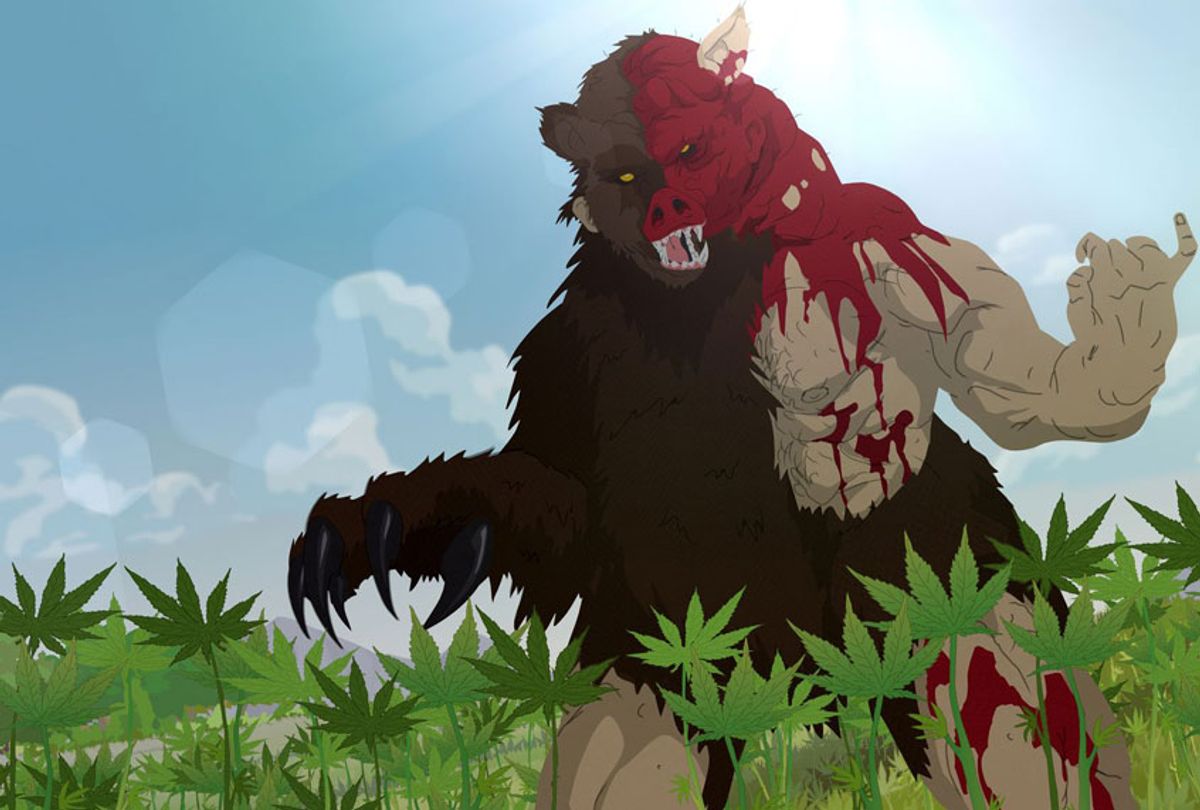 If last week's "South Park" episode was a giant apology to Al Gore for mocking his warnings about global warming, Wednesday night's episode continued that theme by ridiculing everyone else who refuses to be "cereal" about the existential planetary threat.

Considering that this is an issue which involves much more than Gore's individual feelings and ambitions, it was a necessary approach — and a comically effective one.

Picking up where the previous story left off, "Nobody Got Cereal?" covers how Stan (Trey Parker), Kyle (Matt Stone), Kenny (Stone) and Cartman (Parker) attempt to clear their names after two of them are falsely accused of perpetrating a school shooting (Kenny and Cartman) and the other two are believed to be helping them escape (Stan and Kyle). The real villain, of course, is ManBearPig, the grotesque human/ursine/porcine hybrid that mauls hapless townsfolk who continue to deny its existence because doing so is so darn inconvenient. As they attempt to alert everyone about the threat, they learn that it was summoned into existence by Stan's grandfather (Parker) and other elderly townsfolk, who struck a deal with the demonic creature in which it would let them own lots of cool stuff (gas inefficient cars, boutique ice cream) in exchange for returning and murdering millions at some distant future date.

Now the elderly are upset — not because ManBearPig is hurting innocent people but because they assumed they'd be dead before they might have to deal with the consequences of their bargain.

Before getting into the political and social commentary in this episode, it is worth mentioning that a lot of its most effective jokes have nothing to do with global warming. The townspeople's obsession with the new video game "Red Dead Redemption 2" continues to be a running storyline, and while it felt a tad grating in the first episode, it is taken to such an extreme in this one that it evolves from being amusing to downright chuckle-worthy at times. There is also something gratifying about seeing one of the series' longest running gags — this one about Satan (Parker) being a rather decent guy, all things considered — brought to a climax where he engages in an absurdly epic fight with ManBearPig. He gets his clock cleaned and dies, of course (though it remains to be seen whether his death, like that of Ned in the previous episode, will be permanent), but seeing angel wings poof out behind him and a halo appear over his head as he ascends to heaven was a nifty sight gag. He is OK with dying for humanity, you see, because as one character puts it, humanity has been following his advice a lot lately. It's the least he can do.

Yet the most cutting jokes here are the ones about people continuing to deny global warming, with ManBearPig serving as a stand-in. Occasionally Parker and Stone throw a sop to their past as global warming deniers (they insist that some of Al Gore's predictions were wrong), but for the most part their jabs are at the skeptics. At a town meeting near the start of the episode, a leading citizen has a slideshow that bluntly asks whether the citizens should start to worry. One man points out that ManBearPig has already killed both of his children and destroyed his house, but he still isn't sure. Later, as "Should We Start to Worry?" premieres as a TV show about ManBearPig, characters find increasingly verbose ways of expressing the same thought: as ManBearPig goes on bloody and horrifying rampages, maybe it's time to consider the conceptual possibility of worrying about him.

Even a reporter, in the name of being "unbiased," discusses that the townsfolk are seriously contemplating worrying about him, but insists that we must be fair to the other side which believes that all of this hullabaloo is just for political gain. Before he can finish his bipartisan analysis, ManBearPig arrives and eats him alive.

What makes this joke so effective is that it could actually work about issues other than global warming. The point that Parker and Stone seem to be making, more broadly, is that when people become fiercely divided about a major political or social issue, the instinct is to assume that both sides must have a point. The notion that there are occasions when one side is flat-out right and the other is flat-out wrong goes against our instincts to try to shoot up the middle, and those tendencies are deadly when mistakes have been caused by our baser impulses (in the case of ManBearPig or global warming, greed) and correcting them requires one side (those who recognize science) to prevail over the other (science deniers).

The only real failure of the episode is its handling of the Al Gore subplot. After using the previous story to redeem his character for having been the target of jokes for twelve years, this one mostly uses him for sight gags in which it seems like his ghost is offering words of wisdom — but of course Gore isn't dead, and so each time it is revealed that he is just using a projector or other technology to seem spooky and ethereal. Because these don't amount to anything when it comes to the actual story, it feels like Parker and Stone were including Gore more out of a sense of obligation than because they had anything further to say about him. Their last episode was an apology to Gore and had a reason to include him, but this time around he was excess baggage.

That is a minor quibble, though, especially because of the ingenious way that the episode ends. With the South Park boys realizing that they have no choice but to renegotiate the elderly citizens' contract with ManBearPig, we're treated to the borderline brilliant sight gag of an evil, Hieronymus Bosch-ian monster — the one that has been ripping out people's organs with his claws and teeth and leaving blood, gore and mayhem everywhere — dressed in a tidy business suit as he politely whispers reasonable counteroffers to his overly casual attorney. He's willing to renegotiate, but now he wants the townspeople to give up soy sauce and "Red Dead Redemption 2." They're not willing to do it, so the boys settle for letting him murder children in "Third World" countries after a few years so long as they get to keep all of their cool stuff.

It's an appropriately cynical ending for a series that is at its best when it highlights the worst in humanity. Since the very first season, "South Park" has been unapologetically misanthropic in its outlook, arguing that people are stupid, selfish cowards who will regularly turn down the opportunity to do the right thing in the name of petty instant gratification. It makes sense that they would see global warming denialism as yet another example of how this happens. Ironically enough, though, the fact that Parker and Stone were willing to make a two-part apology for previously being among those narrow-minded deniers demonstrates that there is still some hope for change.