The jagged hindsight of "The Clinton Affair": 20 years later, it looks like a different story

Two docuseries examine scandals that plagued the White House, but one plies its humanity over the weight of history 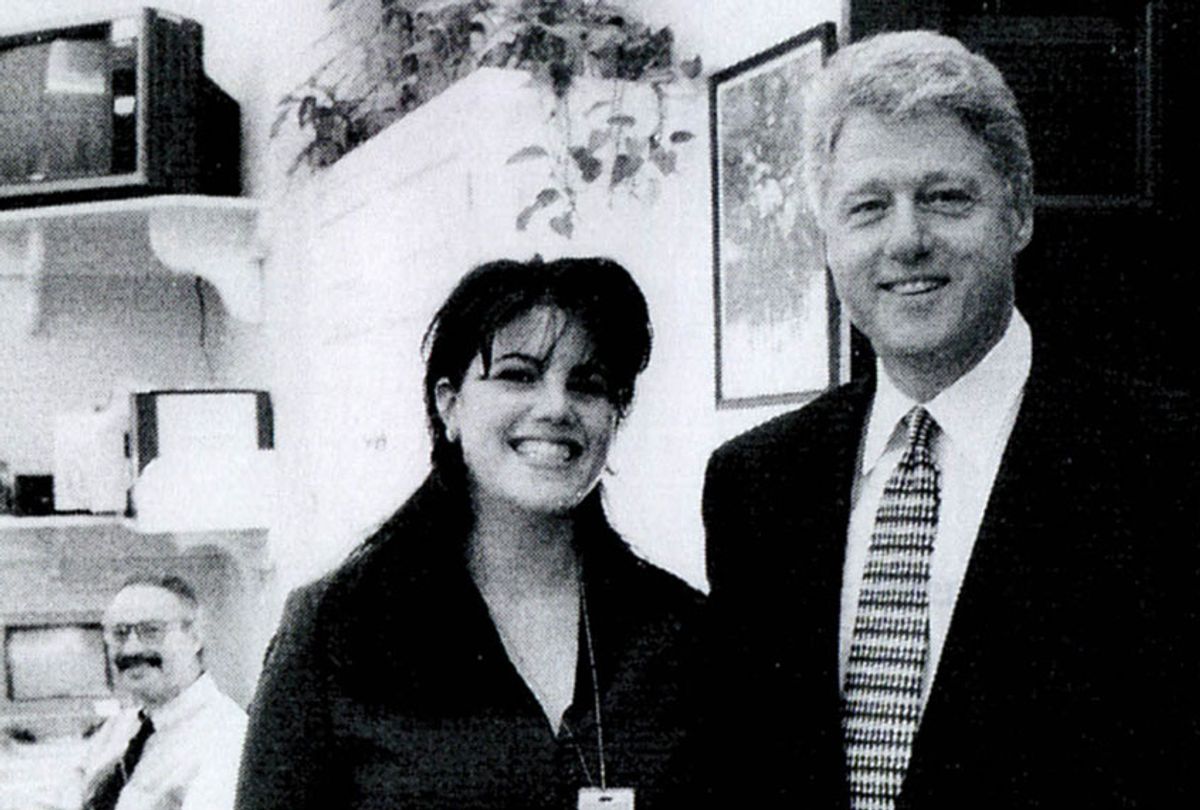 All too often hindsight doesn't merely yield the clearest view of what occurred in the past. Such vision tends to be accompanied by the fresh, sharp pain of realization.

Any wisdom revealed by the passage of time and the contextualizing of history can strafe like glass shards, tiny bites from crystal teeth that make a person flinch. That sensation can feel personal or be imagined as a global experience. A pair of docuseries, each touching on the scandals of past presidencies, yields a touch of each.

If Showtime's four-part documentary "Enemies: The President, Justice & the FBI" seems to cut harder that's because the topic has more urgency right now, with a Constitutional crisis looming but a breath away.

Over its four episodes, which are inspired by Pulitzer Prize-winning author Tim Weiner's 2012 book, the series examines the actions that took place during the presidencies of Richard Nixon, Ronald Reagan and Bill Clinton that tested the resilience of the rule of law as our democracy defines it. In the 98-minute final chapter, directed by Academy Award winner and executive producer Alex Gibney, "Enemies" walks us through the impact that Comey and Robert Mueller have had on the FBI during their leadership and what that portends for Donald Trump.

"Enemies," premiering Sunday at 8 p.m., cannot help but feel cooler and more didactic in comparison to A&E's "The Clinton Affair," debuting the same night, also executive produced by Gibney. But in their own way, each work serves the other.

"Enemies" views the Federal Bureau of Investigation's relationship with the executive branch almost entirely in historic terms, although certain retellings of stories may elicit a gasp or a whistle from the viewer. For the most part these are chapters with which the audience has some familiarity, including the Reagan White House's role in the Iran-Contra Affair, Watergate (of course) and the many, many "-gates" that swirled around the Clinton White House.

In contrast, "The Clinton Affair" in 2018 will taste, to some — particularly to the partisan — like perfectly salted political popcorn. Few political stars have tumbled in the esteem of so many as have Bill and Hillary Clinton, and perhaps Bill more than his wife among women.

Concurrently the public estimation of Monica Lewinsky, the former White House intern with whom he had an affair twenty years ago, appears to have shifted in some way. More than a little late, to be honest; imagine spending the majority of two decades as the topic of late-night punchlines or having your name be synonymous with vixenish, predatory sexual behavior.

If you still feel that way more than a year since the loud, angry discussions about the myriad ways that the male-skewed power imbalance punishes women in their careers and personal lives, A&E's six-part docuseries, debuting Sunday at 9 p.m., isn't likely to change your thinking about Lewinsky, or Bill Clinton's culpability.

But at the very least, as Lewinsky points out in her recent candid, poignant Vanity Fair piece, for once the title is "The Clinton Affair." "Bye-bye, Lewinsky scandal. . . I think 20 years is enough time to carry that mantle," she writes.

Lewinsky may be one of more than 50 subjects who sat for the range of interviews used in the series, which is a chronological journey through Clinton's political life starting with his earliest days in Arkansas politics on through to his ascent to the Oval Office. Without question, however, she's the producers' most important get.

Not surprisingly, the Clintons don't appear in the series. Nor does Linda Tripp, a woman Lewinsky once considered to be her friend. Tripp was a colleague 23 years older than Lewinsky who willingly sold out a naïve young woman just as her career was getting started.

And it's important to keep that detail in mind — the fact that Tripp had many years of wisdom and experience on Lewinsky — while listening to her recorded conversations with Lucianne Goldberg. The conservative literary agent persuaded Tripp to reveal details Lewinsky shared with Tripp, in confidence, which would eventually grant independent counsel Kenneth Starr the kindling he needed to set Clinton's reputation on fire.

There is no question that Lewinsky made a terrible decision in her early 20s that she'll never completely be allowed to escape. The difference now, perhaps, is that more people feel her pain than in previous years, in no small part due to a post-#MeToo reappraisal of the skewed power dynamics that lead older men to take advantage of younger women.

At no point in "The Clinton Affair" does Lewinsky attempt to hide her discomfort at reliving the traumas she endured 20 years ago when her relationship with then-President Clinton became the topic of a best-selling work of erotica passing as public record. When she discusses the passages that brought the greatest pain to her and her parents, both of whom appear in the series as well, she chokes up.

Lewinsky is my contemporary, age-wise. While the scandal dominated the news cycle, I recall feeling angry toward her due to the way she represented ambitious young women everywhere. And after that anger passed, from the safety of a career and life well on its way, I laughed along with the jokes in late-night monologues, scoffed at occasional stories about her rebranding efforts, such as her attempt to reinvent herself as a handbag designer.

When HBO aired "Monica in Black & White" in 2002, the general public sentiment toward her at the time is reflected on the faces of the audience members, most of whom were women around her age. They all looked, in a word, pissed. When she takes the stage at the start of the film, the audience applause is tepid.

Now, we're all 20 years older. While watching "The Clinton Affair" and the many spools' worth of archival footage featured within, the main emotion that comes to mind are sorrow and a touch of shame. What we didn't see then was, though legally an adult, Lewinsky was a kid in over her head.

Listening to the audio of phone conversations between Tripp and Goldberg, or Tripp and the various FBI agents assisting her with ensnaring Lewinsky, is painful. This girl never had a prayer.

But again, this assessment is personal. "The Clinton Tapes" also features Paula Jones, the woman who sued Clinton for sexual harassment during his first term in office. Jones is far more emotional than Lewinsky in her current-day retelling. And unlike Lewinsky, her looks and her Arkansas accent became fodder for ridicule.

Also unlike Lewinsky, however, Jones offered herself up as a pawn for Trump to use during his first presidential debate with Hillary Clinton, appearing in the hours before to remind the public of Bill's indiscretions.

Not helping Jones' ability to elicit empathy is the vampy presence of her spokesperson Susan Carpenter-McMillan, putting on her best Cruella De Vil for the camera. "Because of my political beliefs, it was just too tempting" to decline assisting Jones, she coos.

At any rate, beyond the emotional resonance of "The Clinton Affair," director Blair Foster does an excellent job in structuring the history of and leading up to the impeachment proceedings that occurred 20 years ago while also emphasizing the emotional toll they took on everyone involved. In the Vanity Fair piece Lewinsky points out that two of the three main editors and four of the five executive producers on the series are female, and this shows in its tone.

This also makes it a tremendous companion to "Enemies," particularly the third episode featuring the Clintons. Denuded of emotionality, the Showtime series' treatment instead dives into the ideological aggression driving conservatives' relentless hounding of the Clintons and how a Republican-driven House of Representatives used the FBI as a tool to dig at their legacy. At last, thanks to Clinton's affair, they discovered a means to trip him up.

Goldberg, in her interview, contests this characterization. "It wasn't so much about bringing him down," she says. "It was about, 'Open your eyes, world, and see who this man is.'"

As much as it may pain some people to admit it, we're seeing a lot more clearly now.

During a interview conducted in June by NBC News' Craig Melvin, the former president is adamant in his continued refusal to apologize directly to Lewinsky. Only a couple of years ago, before the #MeToo movement found a celebrity bullhorn, many women might have claimed to understand him. In the common narrative of the Lewinsky story that's taken hold over two decades, isn't she the one who tempted the president?

Shouldn't she have known better?

Now she does. And many of us do, too.