Tim Blake Nelson, Coen Brothers muse, "never expected to have a career as a film actor" 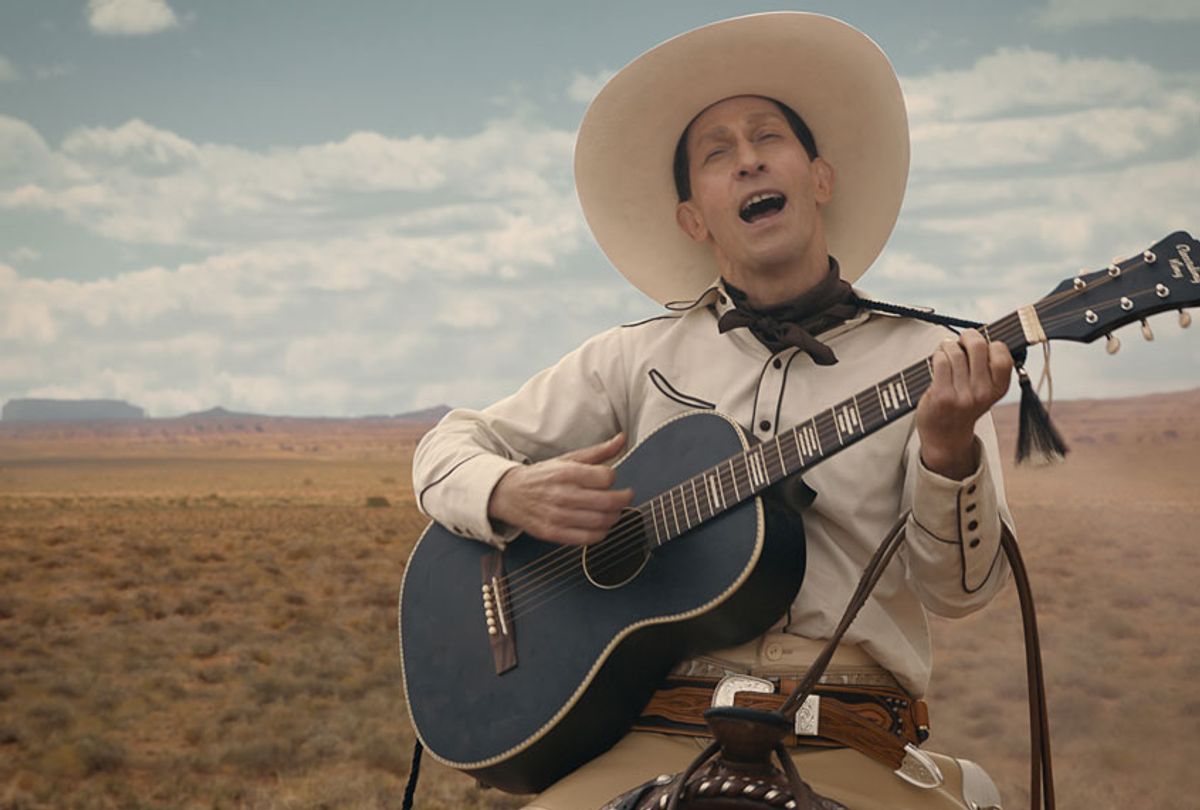 After his show-stopping performance in "O Brother, Where Art Thou?" Joel and Ethan Coen were eager to work with Tim Blake Nelson again, and wanted to create a unique role just for him. They also told him it might take a bit of time. Now, 18 years later, "The Ballad of Buster Scruggs" is at last in limited release and debuting on Netflix.

"I wasn't initially going to sing in 'O Brother, Where Art Thou?'" Nelson told me during a recent episode of "Salon Talks," describing the origins of his latest character. "But because I'm an actor, I was very zealous in my pursuit of being able to sing my own part rather than having it dubbed. Even though I already had the role, they dispatched T Bone Burnett to very casually audition my singing voice when we were hanging out in a hotel room watching the NBA All Star game. He reported to them that I was adequate, and so I got to sing in that movie."

That was just the beginning. "Then the next year," he recalls, '"Joel showed up at my door and said, 'Here, we've written this, and we want you to play this Buster character.' I read it, and I was utterly astonished. It was 15 pages, but quite a packed 15 pages. They said, 'But we've gotta write the other vignettes to go along with it, so it may be a few years before we make this.'"

Featuring six unique tales of the American West and costarring Liam Neeson, Zoe Kazan and Tom Waits, "The Ballad of Buster Scruggs" is a typical Coen Brothers affair — at once dark and witty and shocking and sad. The "wonderful Western anthology," as Nelso describes it, opens with him making an entrance any actor would dream of — riding on a horse and singing a song.

"Buster is a singing cowboy, bounty hunter, pistol twirler and dancer in the old West," Nelson explains. "Taking names, singing songs. Only Joel and Ethan could have written a character like this, and I'm quite blessed to be able to play it. He introduces the movie in a very funny and unpredictable way. Then the movie leaves my character behind and goes into five other vignettes, and you explore five other characters along with them."

The anthology approach to storytelling is once again having a moment. "They were a phenomenon, particularly in Italian cinema in the '60s and '70s," Nelson says. "There have been a few made in the U.S., like 'New York, I Love You' or 'New York Stories.' Usually in anthology films it's a different director and writer for each segment. But in this one, it's all Joel and Ethan, kind of like 'Wild Tales,' a wonderful movie from Argentina a few years ago. And they find, as only Joel and Ethan could, these six sub-genres within the Western genre. Each one is distinctive and completely different from the other, however, some shared themes run through them all."

Like a nesting doll of tales within tales, "The Ballad of Lester Scruggs" is very much a story about storytelling. Characters sing, orate and spin yarns — and all within the framing of chapters in a book. "A lot of people accurately point out that a common theme is mortality, and it is," says Nelson. "It's all summed up gorgeously in the final episode in which this reaper of souls talks about why we love hearing stories. It's to distract us from our mortality. That's what ties everything together."

Working with the Coen Bros. sounds like a paradox to the uninitiated: Nelson says their scrupulously storyboarded approach would make you think you'll be boxed in as a performer, but in fact the opposite is true.

"Even though they're so exacting and so meticulous and careful, you have a tremendous amount of freedom inside of that. You can really do anything you want," he says. "It's that classic oxymoron that with structure comes more freedom, because you know what your parameters are, and therefore you can really unshackle yourself within that. That's the way they work. It's just a joy being on set and knowing that you can do and try anything, and they're going to be cool with that."

Although Nelson hadn't appeared in a Coen Brothers film in several years before "Buster Scruggs," he's never strayed far from their orbit. As a writer and director himself, he says the Coens remain strong collaborators even when he's not working on their film, and vice versa.

"[They] always come into my editing room and talk to me and help me. They read my scripts, and I often read theirs. I probably take more of their advice than they take anything I ever have to say," he says. "I feel like I'm a fairly successful painter, but then I get to go to Picasso or Matisse in the Coen Brothers and share my stuff and get their advice. It's fantastic to feel like I have them in my court."

"And they've done that for not just me but [actor/directors] John Turturro and Steve Buscemi," he adds. "Fran McDormand now produces. I think every one of us who's been around Joel and Ethan has benefited tremendously from their approach to storytelling. They've literally come in to the editing room and said, 'Why don't you shave 20 frames off that shot?' or 'Why don't you go wide here?' I mean, they've really helped me a lot."

Nelson says that despite the cutthroat reputation of his industry, he's never had a problem getting other filmmakers to check out his work and give their thoughts, and he returns the favor for the Coens, too.

"It's really time consuming and difficult and arduous to make a movie, to get one financed and actually make it. It doesn't happen that often. In my case, I make one every four or five years. So it's a very special experience when you're in the editing room and you've actually been able to spend millions of dollars making a movie with incredible actors that you might even actually have written the script for yourself. We recognize that with one another. So when asked to show up and give an opinion, we go and do that," he says.

This collaborative spirit reminds him of the old days, he says, before home editing systems took over and filmmakers were all buzzing around the same facilities working on their cuts.

"There'd be five or six editing facilities on a single floor. You'd meet other filmmakers for lunch in the middle of the day, and you'd be in and out of each other's rooms watching scenes," he says. "I really miss that. I was cutting my first film when Ang Lee was cutting 'The Ice Storm.'"

Yet for all his successes, Nelson reveals that his on-screen career took him by surprise. "I never expected to have a career as a film actor, because I can look in the mirror just like anybody else," he says.

"I'm not gonna be on the cover of magazines, and I'm not a matinee idol," he says. "Luckily, movies also need characters to be around the leading men and women. I have gotten to be one of those people, and I'm incredibly blessed. I owe a great deal of it to Joel and Ethan, because they love character faces. They've changed the lives of so many of us: If you think about Buscemi and Turturro, and Fran [McDormand] and Philip Seymour Hoffman, JK Simmons, Jon Polito. Their taste for the unconventional has allowed for the unconventional actor to have a career."