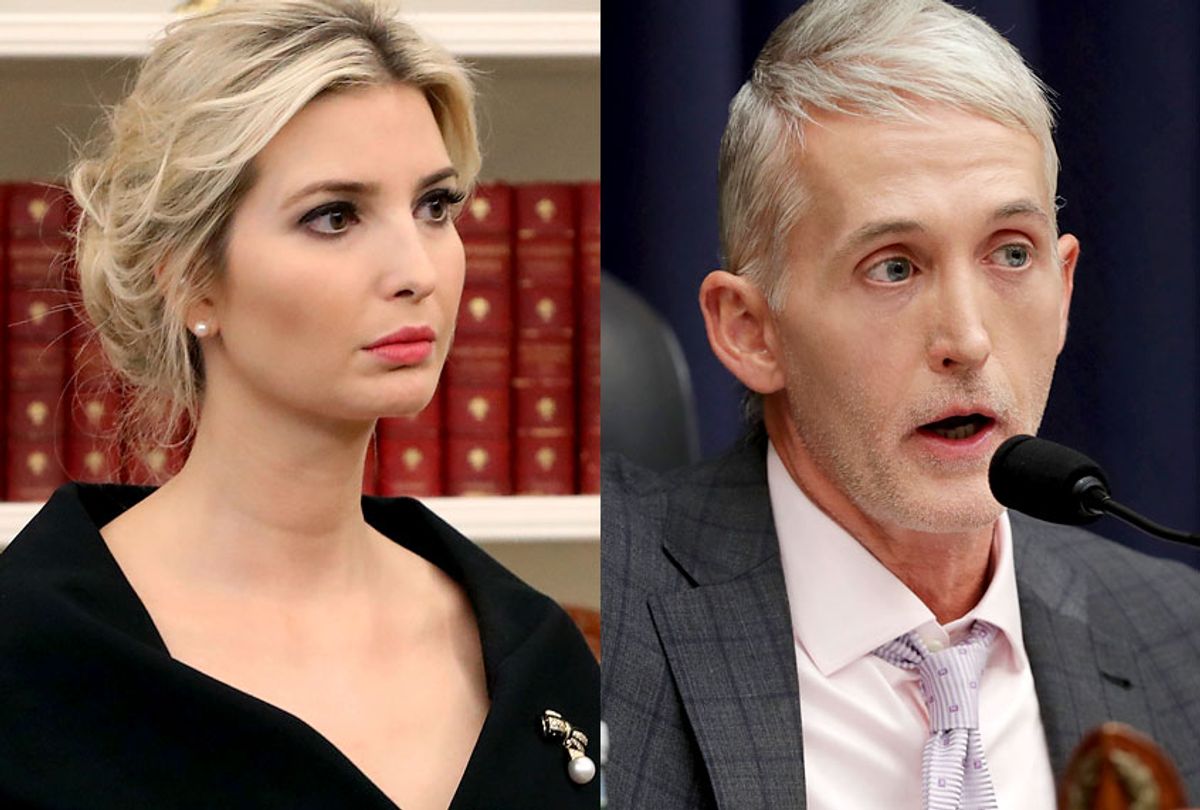 Rep. Trey Gowdy, R-S.C., is demanding that President Donald Trump turn over information about his daughter's use of a private email account to conduct government business — and he is imposing a deadline.

Gowdy — who currently chairs the House Oversight Committee, although he will have to turn over his gavel once Democrats take control of the chamber in January — sent a letter to White House Chief of Staff John Kelly demanding information on Ivanka Trump's use of a personal email account when performing public work, according to multiple reports. Establishing Dec. 5 as a deadline for complying with his demand, Gowdy wrote that the Trump daughter's use of that email account while serving as an adviser to the president might "implicate the Presidential Records Act and other security and recordkeeping requirements."

Gowdy also wrote that "in light of the importance and necessity of preserving the public record and doing so in a manner that is reflective of relevant statutory and regulatory requirements, the Committee must assess whether the White House took adequate steps to archive Ms. Trump’s emails and prevent a recurrence."

Rep. Elijah Cummings, D-Md., is the ranking member of the House Oversight Committee and is expected to take it over once Democrats gain control of the House of Representatives. In a statement to Fox News, Cummings also made it clear that he expects to learn more about both Ivanka Trump's use of personal email and reports that her husband and fellow presidential adviser, Jared Kushner, may have done likewise.

"We launched a bipartisan investigation last year into White House officials’ use of private email accounts for official business, but the White House never gave us the information we requested," Cummings explained in his statement. He added that "we need those documents to ensure that Ivanka Trump, Jared Kushner, and other officials are complying with federal records laws and there is a complete record of the activities of this Administration."

In a report from earlier this week, it was revealed that Ivanka Trump had used a private email account for much of her government business during a large chunk of 2017. When confronted on the matter, she claimed she was unaware of the record-keeping regulations imposed on government officials about their use of personal email. This is in spite of the fact that her father focused on Hillary Clinton's use of a private email server for government business during the 2016 presidential election, arguing that she should be thrown in jail for doing so. He also frequently brought up Clinton's email scandal in his tweets during that campaign, such as writing, "How can Hillary run the economy when she can't even send emails without putting entire nation at risk?" and "Look at the way Crooked Hillary is handling the e-mail case and the total mess she is in. She is unfit to be president. Bad judgement!"