"The system is rigged": How the crimes of "The Panama Papers" affect us all

In "The Panama Papers" documentary, director Alex Winter casts a gaze toward the real enemies of the people 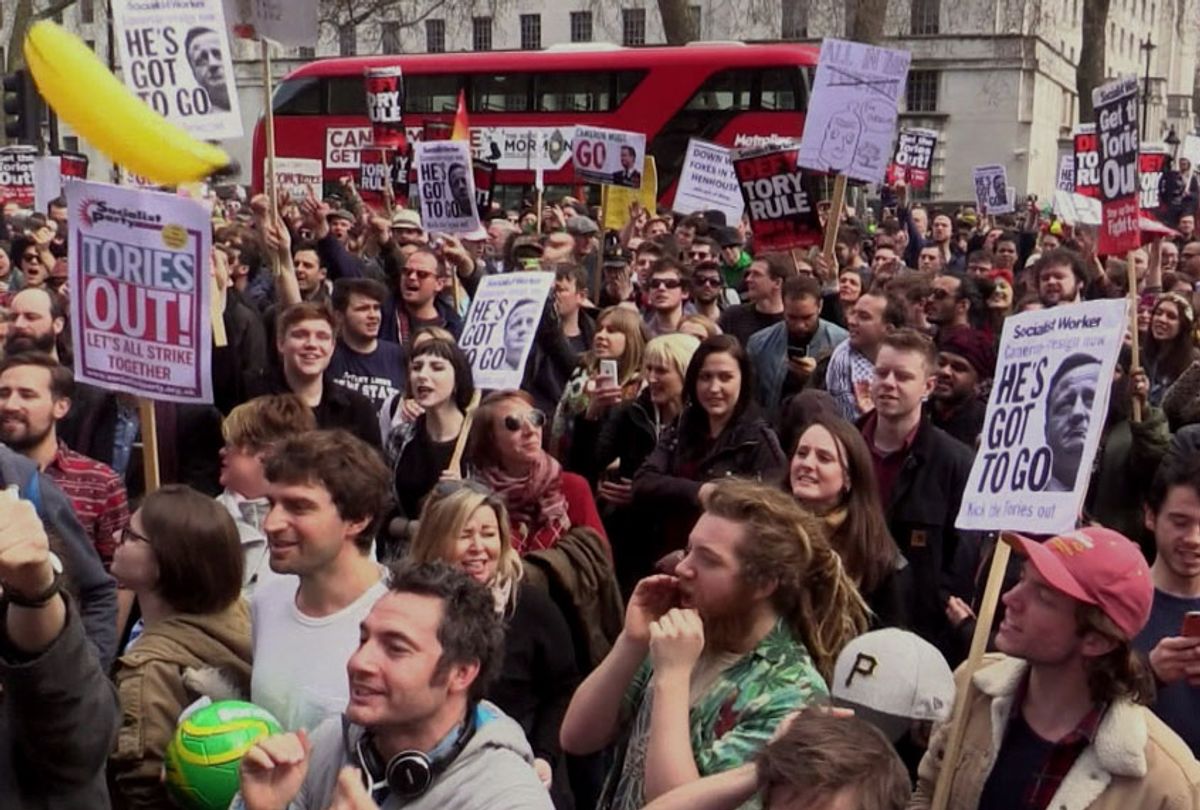 “The Panama Papers,” Alex Winter’s riveting documentary for Epix, is a crime story.

Winter makes that point abundantly clear throughout his 96-minute film, making its broadcast debut Monday at 9 p.m. on the cable channel. Just in case that point escapes us, he turns to popular culture to simply explain how the crime works.

Before this, the documentary begins where the saga itself started, with Bastian Obermayer, an investigative reporter for the Munich-based paper Süddeutsche Zeitung, recalling his first contact with an anonymous whistleblower in 2015 who calls himself John Doe.

Obermayer explains the necessity of calling for reinforcements on an international scale, a move all but unheard of in a competitive industry driven by the hunt for scoops and exclusive. How else can one make sense of a data dump that includes 11.5 million documents, including passports, emails, financial information and incorporation papers for offshore companies?

Eventually the team of reporters expands from a few to hundreds collaborating across the globe, working together under the umbrella of the International Consortium of Investigative Journalists. Winters closely captures the process of their work, illuminating the grueling nature of combing out the minutiae of the most important data leak in modern history.

“I'm very interested in investigative journalism,” Winter said in during a recent phone interview with Salon. “I see them as the front line of communicating the truth to a populace, which is just extraordinarily important.”

“This shows to criminals — and I dealt with this with on deep level with "Deep Web," my last film — that what we think of as an anonymous, faceless world on the other side of the keyboard can actually very, very quickly become the exact opposite of that.”

“The Panama Papers” represents a continuation of Winter’s  fascination with the intersection of technology and political ideology, ethics and morals, themes he visits throughout an expanding body of nonfiction films that includes 2013’s look at Napster and the MP3 revolution, “Downloaded,” 2015’s “Deep Web” and his recent theatrical release “Trust Machine: The Story of Blockchain.”

(And I suppose I should mention he’s due to reprise the role that made him famous, Bill S. Preston, Esq., in the upcoming sequel “Bill and Ted Face the Music,” pairing him up yet again with his longtime friend Keanu Reeves along with writers Ed Solomon and Chris Matheson.)

To the average person the issues Winter explores in his other documentaries have a specificity about them that may defy appeal to a wide audience. But “The Panama Papers” is powered by a different sort of urgency, in that its findings impact the lives of 99 percent of the people on the globe.

Winter reminds the audience of this frequently during “The Panama Papers,” including pauses to share data about the tax money lost by governments due to evasion and the services it could be providing to the most vulnerable among us.

“A UN report shows that as of 2013 the U.S. lost as much as $277 billion due to tax avoidance,” reads a stat displayed onscreen. “$188 billion of that was lost by corporations avoiding paying their share of taxes. “

To put that in context, the film reveals that said money could cover healthcare for 28 million people in our population, or nearly 70 percent of the 40.6 million people living in poverty.

Here’s even more context: that’s also the equivalent of four years' worth of funding of the Department of Education.

Every crime story has its heroes. In this one, that role is shared by the journalists. Winter’s sustained focus on their work, and the process of it, is a validating touch that rebuts political attempts to paint the profession as corrupt.

This is by design. “To focus on the journalists seems to so concretely illustrate the issues that the film was about, but also gave me an opportunity to focus on really interesting people, which is what docs are about,” Winter said. “And the journalists struck me as the most interesting. I wasn't really interested in hearing from, you know, oligarchs about why they felt tax evasion was OK.”

That said, the average person doesn’t thrill at remembering lines of dialogue from “All the President’s Men” or passages from “The Newsroom” or “The Post.” We prize tales of easy money, danger and violence.

So as one of the nearly 400 journalists sorting through the documents explains how the system of hiding funds in offshore accounts, tax shelters and shell companies works, Winter intersperses his didactic statements with scenes from “Scarface” depicting exactly what’s being described.

This is one of the documentary’s cheekier touches, but inspired in a fundamentally important way. It simply illustrates the process by using one of American popular culture’s most celebrated and familiar stories. But it reveals why the average person may not be paying as much attention to the Panama Papers’ revelations as they should, which is that Americans perversely lionize “Scarface” villain Tony Montana.

“There's the somewhat propagandized notion that you want to get away with taking money from the government. That was Trump's famous line to Hillary during the debate: That doing this makes you smart. You're gaming the system,” Winter said.

Connect these dots, follow fame toward the money, and eventually you’ll get to Donald Trump.

Sigmundur David Gunnlaugsson, the former prime minister of Iceland — shown caught on camera by an Icelandic journalist — also was tripped up by the investigation. Watching him grow flustered and stammer out an angry response mid-interview before storming off is one of several lovely moments “The Panama Papers” highlights.

But among the world leaders whose corrupt complicity is exposed in the Panama Papers’ revelations, Trump’s presence is relatively light. That could be because his participation in tax evasion is widely presumed to be a given even though he has refused to release his tax returns.

Granting a central presence to Trump isn’t necessary for “The Panama Papers” to demonstrate why tax evasion and hiding asset off-shore is not a practice to aspire to – not merely for moral reasons but due to its impact on the average individual’s bottom line. While an international tier of wealthy political and corporate leaders reap the benefits of the kleptocracy they’ve quietly built, entire nations suffer the consequences of their refusal to pay their fair share.

This adds a David and Goliath subtext to “The Panama Papers” as well. Although the ICIJ team is the world’s largest investigative journalism operation, “it requires technology, and encryption, and community, and an enormous courage to do global investigative stories,” Winters said.

“And there’s this pushback from so many different places. You have pushback internally, where your own editors don't want you to work on a story that's this long running and costly. People are being fired within those organizations.  And then you have this era of fake news, where you're fighting that. And then you have journalists who are actually being killed and having death threats.”

That element in itself took some doing on the part of the production staff. “We had to stay fully encrypted. All our drives, all our media, all of our communications, everything. Nobody was allowed to know we were making the film,” Winters said. “I wanted to keep the journalists feeling like they could trust us.”

It’s also a story that has taken deadly turns, as one would expect of any effort that threatens the wealth and influence of the world’s most powerful people. “I was in the cold room at the Guardian when Daphne Galizia was assassinated,” Winter recalled, “and it was only halfway through production. That was a watershed moment in the Panama Papers story."

Daphne Caruana Galizia was an outspoken investigative journalist in Malta who was killed in October 2017 when a car bomb exploded as she was driving away from her home. “It was really stunning because there hadn't really been such a brazen assassination of an EU journalist in that way.”

He added, “it became clear to everyone that it wasn't a one-off. We've now had several journalists since Daphne in the EU who have been killed, [Jamal] Khashoggi notwithstanding. The climate is significantly more intense than it was even when I was finishing the film, much less starting it.”

Winters hopes that in taking the perspectives of the journalists tasked with this ponderous mission, “The Panama Papers can effectively communicate to the audience the crucial importance of this issue, one that’s been largely relegated to the backburner in mainstream news coverage."

"Not only are citizens being denied funds for basic infrastructure needs, not to mention access to healthcare and clean water and education,” he said, “but you're also being robbed of the truth.”

“And these are people whose job it is to, to get the truth to you in a verified form, and they are under enormous threat,” he added. “By wrapping that all up into a human story, hopefully this will have an impact on people.”