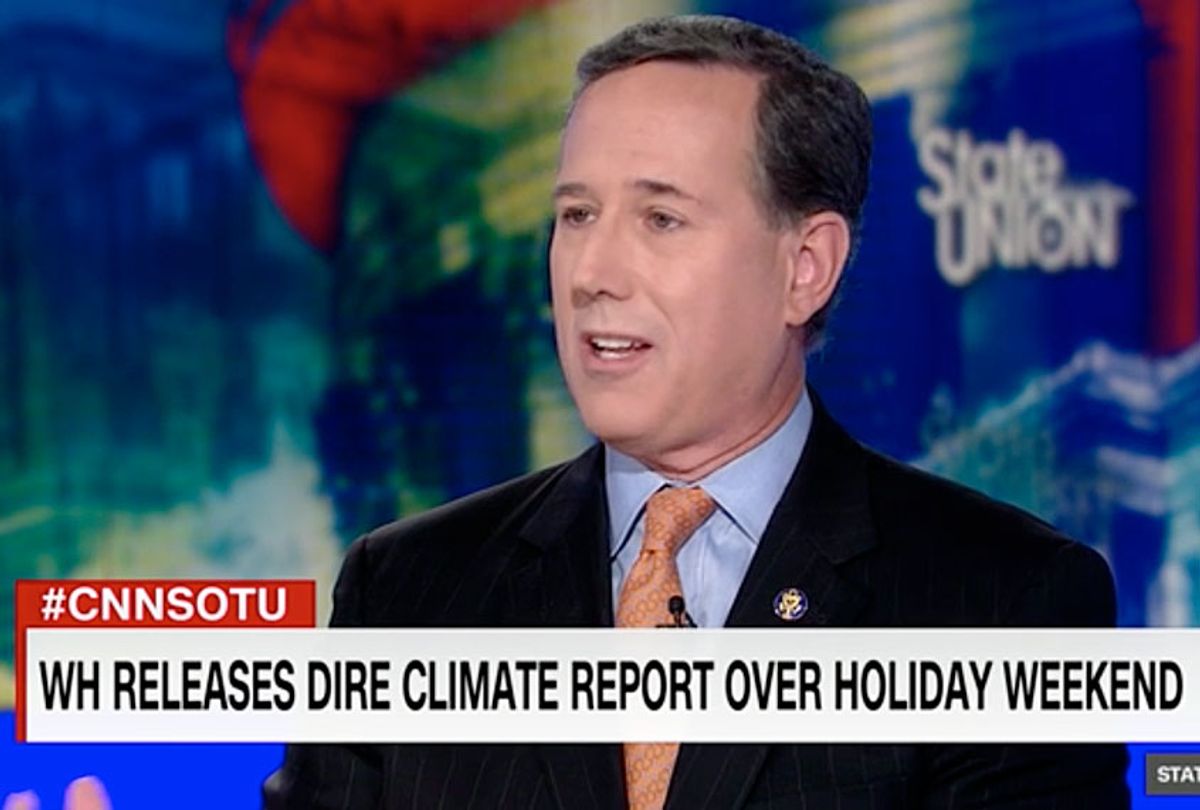 Indicting the willful laziness of television journalists and criticizing their failures to call out politicians and their surrogates for lying about damaging policies is an expanding pastime under this administration.

But one constant, nagging problem that should have been corrected some time ago is an insistent “both sides"-ism as it is applied to issues not driven by opinion or partisanship, but legitimate, data-informed scientific studies.

In this regard both CNN’s Dana Bash and NBC’s Chuck Todd were derelict in the performance of their most basic duty to viewers on their most recent Sunday shows. Each handled Friday’s congressionally mandated report on climate change, the Fourth National Climate Assessment, in the way to which they’ve become accustomed. That is, employing people with opinions to politely yell and sneer at one another as opposed to calling upon accredited experts.

The report’s findings express certainty that climate change poses a severe threat to the health and financial well-being of Americans. “Future risks from climate change depend primarily on decisions made today,” it states. And many of these decisions will be put in place by those voted into office by the very people watching CNN’s “State of the Union” and NBC’s “Meet the Press.”

How did each program dig into this frightening report quietly dumped into the public sphere on Black Friday, when most Americans were more concerned about scoring discounted electronics than staving off mass extinction?

This is the standard format, of course. A panel comprised of thought-leaders with a variety of opinions gather to affirm one another's positions on policy matters or rebut them. Where this effort to hear everyone out fails, as it often does, is when the headlines have to do with hard data underscoring terrible truths we have yet to meaningfully contend with.

The report, which is the administration is obligated by law to release, contradicts Donald Trump’s previous assertion that climate change is a hoax perpetuated by China and not man-made. That's a bizarre and convenient myth, one that leads millions to disregard the impact their daily decisions have on the environment. Surely the actions of the average person have nothing to do with gigantic swaths of California going up in flames, right?

There is no debating whether the sky is blue or whether the moon is made of rock or a chunk of aged Stilton. There are simply truths supported by data, and those who deny those truths. Hearing from people with an intimate knowledge of those facts — a NASA scientist, for example— serves to place the import of such data in terms the layman can understand.

To keep this example going, what “State of the Union” or “Meet the Press” did this weekend was akin to placing Buzz Aldrin on the same level as Alex Jones, who believes the footage of the moon landing was fake. Actually, no — it’s worse. In a discussion about the moon landing, Aldrin might not have even gotten a phone call.

Data backs up that remark: In February 2018, Media Matters released the findings of its analysis of 2017 climate change coverage among the Sunday morning news programs, reviewing segments from “Meet the Press,” ABC’s “This Week with George Stephanopoulos,” CBS News’ “Face the Nation,” and “Fox News Sunday,” featured on its broadcast network.

Their discovery? None of the newscasts featured scientists or journalists who specialize in climate change. Not one. Expertise and science are overrated in news reporting; that much is clear.

Meanwhile, Bash gave Santorum the floor to spread ample misinformation while others with contradicting opinions jammed in a few lines of rebuttal when they could. No scientists were called upon, just Santorum, alongside Symone Sanders, who worked on Bernie Sanders’ presidential campaign, and conservative columnist Bill Kristol.

“This is a report generated by people who are in the bureaucracy. These are not Trump appointees,” Santorum offers when Bash made him first in line to comment. “. . . The point that Donald Trump make [sic] is true which is, look, if there was no climate change we would have a lot of scientists looking for work. The reality is that a lot of these scientists are driven by the money that they receive. And, of course, they don't receive money from corporations and Exxon and the like."

Santorum continues, “Why? Because they're not allowed to. Because it's tainted but they can receive it from people . . . who support their agenda. That I believe is what's really going on here. No one doubts that the climate is changing. No one doubts that. The question is how much does man contribute, number one? And, number two, what can man do to actually change it? Those are the two big issues which we really don't talk about.”

“Except many people do talk about those things a lot, more or less constantly!” Bash did not say — but should have.

While we’re on that topic, CNN only identifies Santorum as “(R) Former U.S. Senator.” Given that Santorum himself brought up the issue of who is paying the authors of this report, this juncture would have been the perfect time for Bash to point out that Santorum is a co-chair of Americans for Energy Security and Innovation.

That’s a biofuel lobbying group and a major proponent of corn-based ethanol, the production of which is seen as significantly increasing greenhouse gas emissions. This is an important detail for viewers to take into consideration when Santorum blames the California wildfire on the state forestry service’s failure to, as Sanders wryly put it, rake the forest floor.

On “Meet the Press,” Todd calls out specific impacts projected by the National Climate Assessment, including three to 12 additional degrees of warming by 2100, .05 to 1.2 feet of sea level rise by 2050 — “that's not very far away, guys,” he points out — and 30 percent increase of area burned by lightning-ignited wildfires by 2060.

What do you make of it, he asks of Kearns Goodwin, the woman famous for writing “Team of Rivals: The Political Genius of Abraham Lincoln”? Even worse, he puts the question Pletka, a surrogate for the conservative think tank that’s been leading the charge of manmade climate change denial for many an increasingly hot season.

To her credit, Pletka points out that she isn’t a scientist although — again — there wasn’t one in sight.

She then offers, "The problem for many is that they perceive this as an agenda that is much more about corporate and much more about law and much more about the kind of governance that America has and much less about climate. So from the standpoint of those who have doubts about this, and I don't think we can have any doubts that there is climate change, whether it's anthropogenic, I don't know, I'm not a scientist. I look at this as a citizen and I see it so I understand it."

Pletka follows up with a classic climate denier's argument that's been shot down many times. “We need to also recognize that we just had two of the coldest years, the biggest drop in global temperatures that we've had since the 1980s, the biggest in the last 100 years. We don't talk about that because it's not part of the agenda.”

In conclusion, she blames Europeans for using “dirty coal.” “Yes, we need to deal with these problems, yes we need to mitigate the things we see,” she says. “But we shouldn't be hysterical.”

In 2018, the deadliest wildfire in California’s history claimed scores of human lives, with hundreds of people's whereabouts still unaccounted for. This isn’t something that happened months ago. Officials have only brought the fire under control on Sunday.

Another major scientific finding released in October 2018, this report coming from the U.N. Intergovernmental Panel on Climate Change, sets the date for humankind’s finale season to 2040, giving us a dozen years to avoid that scenario.  That’s humanity, a definition than includes the American population. And this conclusion was based on work compiled by nearly 100 scientists hailing from 40 different countries.

Even so, CNN gives us Santorum, echoing the opinions of the man who once called climate change a Chinese hoax. He informs other panelists that the state’s bad forestry policy is to blame for California’s out-of-control blazes. Not, say, a drought that lasted for six years, killed millions of trees and likely altered many of the state’s ecosystems, a lasting development one suspects was brought on by man-made climate change. Then again, this is my theory. And I am not a scientist.

Wouldn’t it have been nice to have one of those somewhat adjacent to the discussion of a topic upon which the fate of the world rests? Ah, but that would go against the classic debate format — and that format is where the money is made and truth is defeated.

But this addiction to hearing from “both sides” (quotation marks are intentional) neglects the main purpose of the Sunday shows, which is to examine the news and the facts at the heart of it, as opposed to playing to the partisan feelings surrounding the headlines. To show the impact of policies placing profit above the economic and physical health of billions, and to reveal the motivations and agendas of those invested in downplaying scientific studies or keeping disinformation campaigns alive and circulating.

Applying the so-called “debate” format to every headline, placing charlatans on the same level as historians and specialized reporters, and leaving specialists out of the conversation almost entirely doesn’t merely degrade our increasingly tenuous relationship with the truth. In the arena of man-made climate change, it plays a role in muting the alarm about a dire crisis that is of our own making. It is, in a real way, helping to end us.

If CNN and NBC news insist on compromising their presentation of facts by granting platforms to agenda-driven commentators, the very least they can do is spend a few seconds letting the audience know for whom the Santorums and Pletkas of the world are actually speaking.

It isn’t for the common person. Clearly it isn’t for the environment. But we shouldn’t get hysterical, right? After all, it’s not as if our lives depend on doing something about worldwide increases in temperature, or declining air quality, or flash hurricanes or uncontrollable blazes ravaging entire sections of the country. It’s just another story.