Farr, a civil rights–averse, white-supremacist friendly judge whom Trump nominated, is likely on his way out 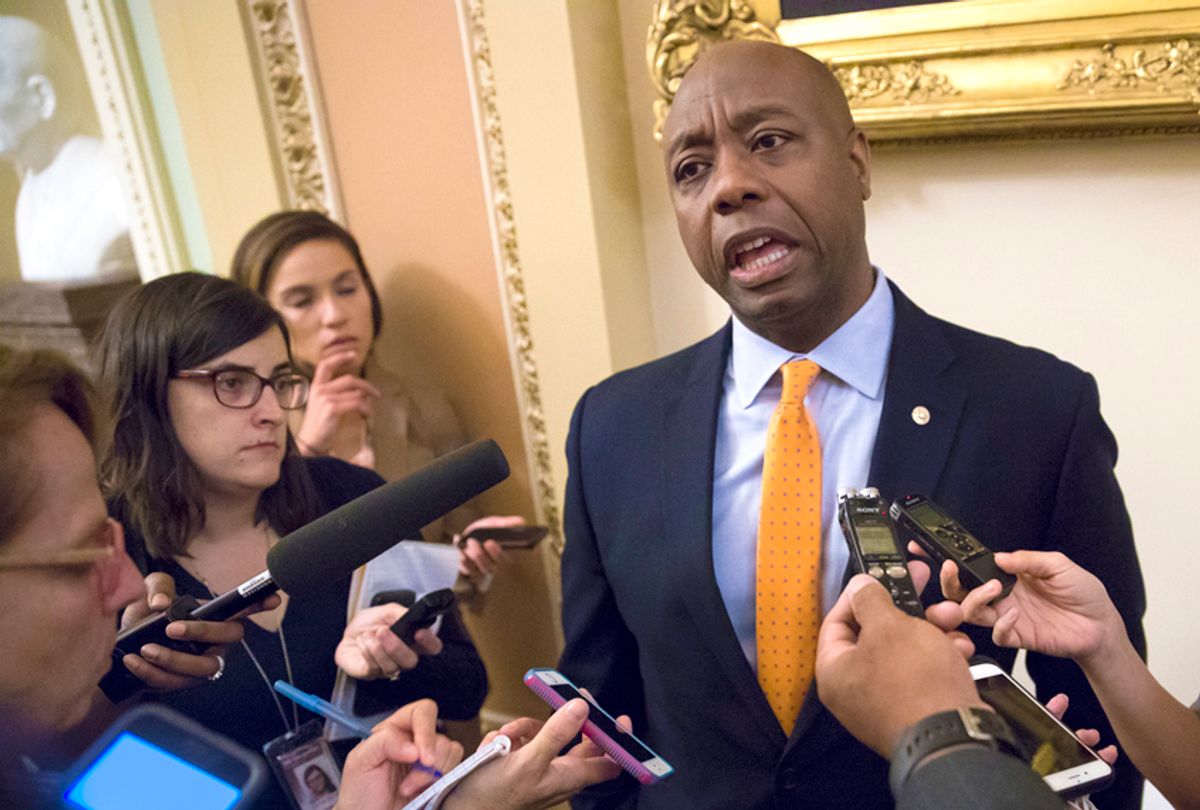 Thomas Farr — the civil rights–averse, white-supremacist friendly judge whom President Trump nominated to be U.S. District Court judge for the Eastern District of North Carolina — may have just had his shot at a judgeship extinguished by the promise of a "no" vote from Republican Senator Tim Scott of South Carolina.

Scott said in a statement on Thursday afternoon he won’t support Farr, and cited concerns about Farr’s decision-making process as a federal judge. Scott was referring to alleged intimidation tactics against black voters for former Sen. Jesse Helms' campaign in 1990, which Farr was involved in. The Washington Post published a Justice Department memo from 1991 that included new information regarding the alleged voter suppression tactics that resurfaced during the fight against Farr's nomination.

“I am ready and willing to support strong candidates for our judicial vacancies that do not have lingering concerns about issues that could affect their decision-making process as a federal judge, and I am proud that Senate Republicans have confirmed judges at an historical rate over the past two years,” Scott said in a statement. “This week, a Department of Justice memo written under President George H.W. Bush was released that shed new light on Mr. Farr’s activities. This, in turn, created more concerns. Weighing these important factors, this afternoon I concluded that I could not support Mr. Farr’s nomination.”

“Senator Tim Scott has done a courageous thing, and he’s done the right thing. Thomas Farr has been involved in the sordid practice of voter suppression for decades and never should have been nominated, let alone confirmed to the bench. Thankfully, he won’t be," Schumer said.

Scott is the Senate’s only black Republican Senator.

The National Association for the Advancement of Colored People (NAACP) strongly opposed Farr's nomination, and said that his confirmation would be “heresy.” The organization advised in a statement: “Thomas Farr poses a serious threat to civil rights, especially since he would preside over a jurisdiction with a large African-American population.  Even among dangerous Trump nominees, Farr stands out for his decades-long crusade to disenfranchise African Americans.  He learned how to intimidate Black voters from segregationist Senator Jesse Helms and helped turn North Carolina into ground zero for voter suppression.”

The vote to nominate Farr has largely run along party lines. Yet Sen. Jeff Flake, R-Ariz., had also previously promised to vote "no" on Farr's nomination. Given that the Republicans have a 51-seat majority, only two "no" votes from Republican Senators Flake and Scott would be enough to doom Farr's shot at the judgeship. The other 49 Democratic and Independent senators were already poised to vote against Farr's appointment.

When Trump nominated Farr to the seat, it had been vacant longer than any other current opening in the country — a distinction that seems likely to remain true.