Sexual allegation against Alan Dershowitz resurfaces; he says it has been "thoroughly disproved"

Woman claims in affidavit she had sex with Dershowitz at age 16; he says charge is false and has been debunked 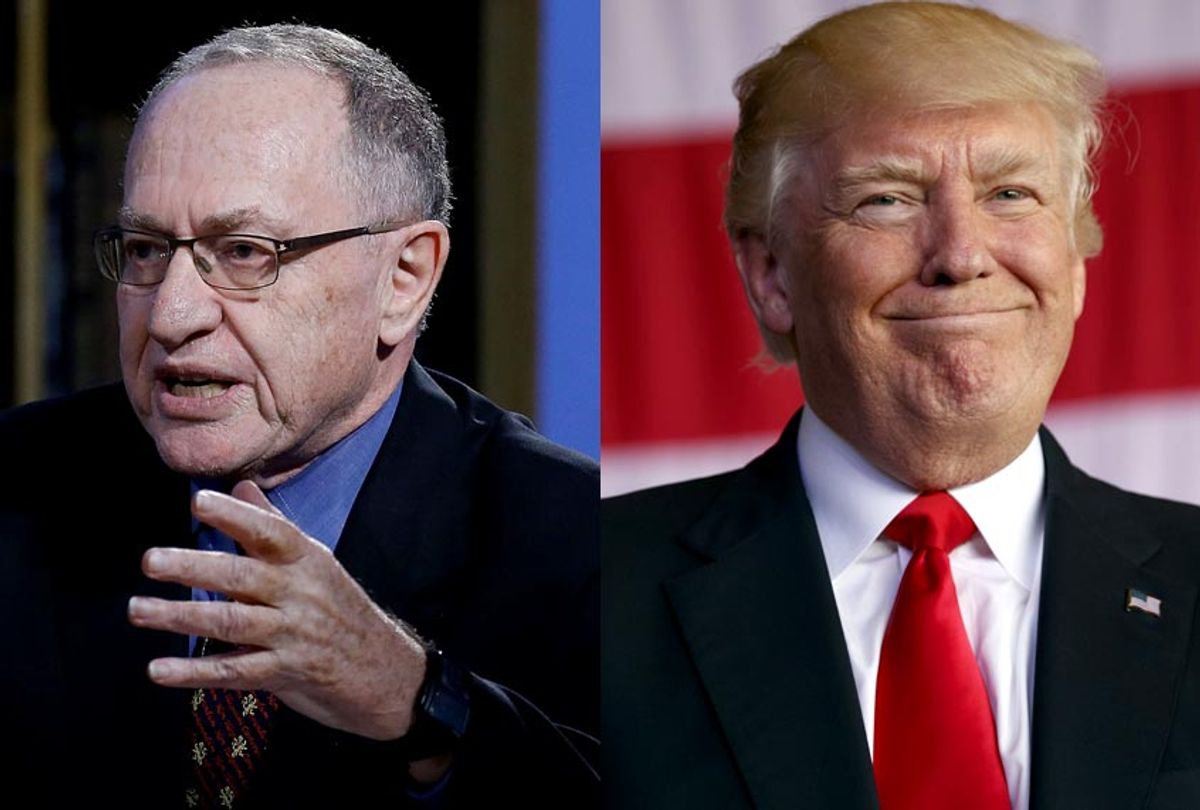 This article has been extensively revised and corrected since its original publication. As first published, the article and headline used plural nouns such as "women" and "minors" in reference to allegations of sexual impropriety made against Alan Dershowitz. That was incorrect. There is only one such accuser, Virginia Roberts, whose allegations Dershowitz has consistently denied. In addition, the article suggested that the alleged sexual activity occurred while Dershowitz was serving as Jeffrey Epstein's attorney. That was also incorrect. Roberts' accusations (which Dershowitz denies) refer to an earlier period in time. Salon regrets these errors. Finally, Dershowitz's response to the allegations made by Roberts and her attorneys has been amplified and clarified, as has the reporting on these matters recently published by the Miami Herald. Salon has also published a letter from Alan Dershowitz in response to the original version of this article.

President Donald Trump once again cited famed attorney and constitutional scholar Alan Dershowitz as a supporter just one day after it was revealed that Dershowitz allegedly enabled Jeffrey Epstein, a billionaire pedophile who has been found guilty of abusing more than 80 women in a trans-Atlantic sex trafficking operation of underage girls. In filings associated with that case, Dershowitz has also been accused of having sexual contact with an underage girl, which he vigorously denies.

Trump on Thursday invoked Dershowitz as he railed against special counsel Robert Mueller's ongoing investigation into allegations of collusion between his 2016 presidential campaign and Russia.

Trump wrote, "Alan Dershowitz: 'These are not crimes. He (Mueller) has no authority to be a roving Commissioner. I don't see any evidence of crimes.'"

"This is an illegal Hoax that should be ended immediately," the president continued. "Mueller refuses to look at the real crimes on the other side. Where is the IG REPORT?"

The president's tweet comes just one day after the Miami Herald published an in-depth exposé about how current Labor Secretary Alexander Acosta, while a prosecutor in Miami, allowed Epstein to face unusually lenient charges and sentencing for sex-related crimes against minors. As the report notes, Epstein was "accused of assembling a large, cult-like network of underage girls — with the help of young female recruiters — to coerce into having sex acts behind the walls of his opulent waterfront mansion as often as three times a day, the town of Palm Beach Police found."

While the report largely centers on Epstein's crimes and the extent to which Acosta catered to the demands of Epstein's legal team, it also contains disputed and unsubstantiated accusations that Dershowitz engaged in sexual encounters with an underage girl in the early 2000s.

Virginia Roberts, one of Epstein's accusers, claimed that she was "loaned" by Epstein to Dershowitz. The Herald notes that in a 2015 court affidavit, Roberts wrote, "I had sexual intercourse with Dershowitz at least six times. The first time was when I was about 16, early on in my servitude to Epstein and it continued until I was 19." The trysts, she wrote, allegedly happened at Epstein's homes in Palm Beach, New Mexico and on Epstein's island in the Caribbean.

Dershowitz has vehemently denied the accusation, telling the Herald that he never met Roberts and never saw Epstein with any underage girls. In a letter to Salon after the original publication of this article, Dershowitz wrote that documentary evidence proves he was not in any of the places Roberts claimed he was, and that a judge in the Epstein case had struck Roberts' affidavit from the record and sanctioned her attorneys for filing it.

The Miami Herald article reports that legal history with a different emphasis, writing that Bradley Edwards and Paul Cassell, the lawyers who represented Roberts and other alleged Epstein victims under the Crime Victims' Rights Act, had sued Dershowitz for defamation and he had countersued, with the parties settling out of court and Dershowitz saying he had been vindicated.

Edwards and Cassell admitted making a “tactical mistake” in filing the accusations against Dershowitz as part of a lawsuit not involving him. But they emphasized that the settlement had no bearing on the veracity of Roberts’ allegations.

The judge for the Crime Victims’ Rights Act lawsuit agreed that the affidavit was misplaced in that case, and it was dropped.

"The story was 100 percent flatly categorically made-up," Dershowitz told the Herald, adding that Roberts and her attorneys fabricated the allegations "so she could get money."

Dershowitz denied these allegations, as well, telling the Herald that "he had nothing to do with gathering background on the girls — or in directing anyone to follow the police, or the girls and their families."

"I'm not an investigator," he continued. "My only job was to negotiate and try the case when it comes to trial."

Still, the newspaper alleges that Dershowitz convinced then-Palm Beach state attorney Barry Krischer that the girls "would not be credible on the witness stand."