As a U.S. attorney, Acosta reportedly shut down a probe into a trans-Atlantic sex trafficking operation of minors 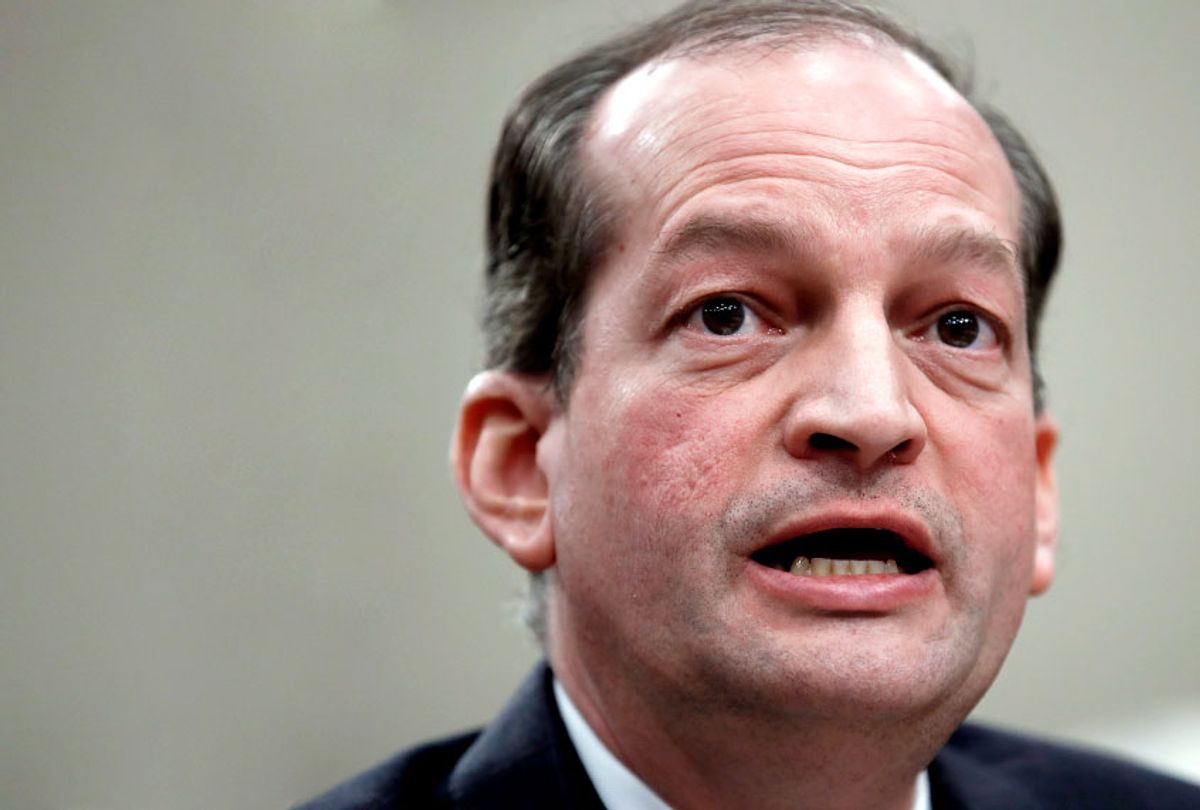 Labor Secretary R. Alexander Acosta reportedly helped Jeffrey Epstein, a billionaire pedophile who has been found guilty of abusing more than 80 women, cut a secret non-prosecution agreement that shut down a federal investigation into a trans-Atlantic sex trafficking operation of underage girls.

A sweeping in-depth expose by the Miami Herald has revealed how Acosta, as a prosecutor in Miami, allowed Epstein to face unusually lenient charges and sentencing for sex-related against minors. As the report notes, Epstein was "accused of assembling a large, cult-like network of underage girls — with the help of young female recruiters — to coerce into having sex acts behind the walls of his opulent waterfront mansion as often as three times a day, the town of Palm Beach Police found."

These alleged crimes could have put Epstein in prison for life. Instead, Acosta, as the U.S. attorney handling the case, negotiated an "extraordinary plea agreement that would conceal the extent of Epstein's crimes and the number of people involved." In addition, the Herald notes, Acosta was personally involved in negotiating Epstein's non-prosecution agreement, and "allowed Epstein's lawyers unusual freedoms in dictating the terms (of the agreement)."

The resulting agreement, which Acosta signed, ensured that Epstein would only serve 13 months in county jail — and he was allowed to leave jail six days a week for 12 hours due to a work release provision. In addition, it "essentially shut down an ongoing FBI probe into whether there were more victims and other powerful people who took part in Epstein's sex crimes." The agreement also guaranteed that Epstein and the adult women he allegedly hired to procure young women to his mansion and arrange his sex sessions, whom the Herald referred to as his "co-conspirators," also received immunity from prosecution.

Acosta seemed to go to great lengths to tend to the demands of Epstein's legal team. The article notes, "In email after email, Acosta and the lead federal prosecutor, A. Marie Villafaña, acquiesced to Epstein's legal team's demands, which often focused on ways to limit the scandal by shutting out his victims and the media, including suggesting that the charges be filed in Miami, instead of Palm Beach, where Epstein's victims lived."

It is also likely that Epstein benefited by having influential friends and acquaintances, including former President Bill Clinton, then real-estate tycoon Donald Trump and Prince Andrew.

As labor secretary, Acosta's duties include overseeing human trafficking and international child labor laws. He has recently been mentioned as a potential successor to former Attorney General Jeff Sessions, who was ousted from his role as the nation's top law enforcement official just one day after the midterm elections earlier this month, in which Democrats won control of the House of Representatives while Republicans expanded their Senate majority, which will smooth the way for Trump to confirm a successor.

During his Senate confirmation hearing in March 2017, Acosta defended his record as a U.S. attorney, and was forced to address his decision not to indict Epstein on federal charges.

"At the end of the day, based on the evidence, professionals within a prosecutor's office decided that a plea that guarantees someone goes to jail, that guarantees he register [as a sex offender] generally and guarantees other outcomes, is a good thing,'" Acosta said at the time.

Sen. Dianne Feinstein, D-Calif., listed Acosta's handling of the Epstein case as one of the reasons she voted against his appointment to head the Labor Department. She noted, "His handling of a case involving sex trafficking of underage girls when he was a U.S. attorney suggests he won't put the interests of workers and everyday people ahead of the powerful and well-connected."