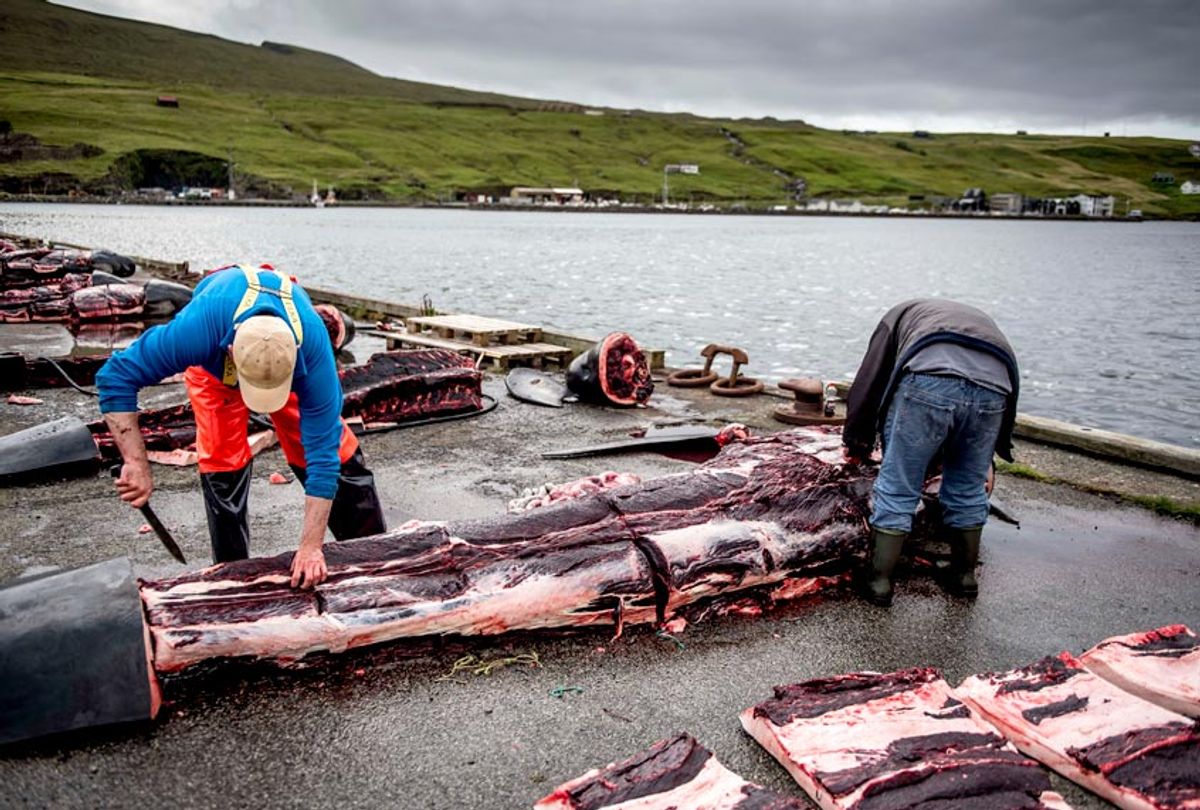 Men skin the body of a pilot whale on the quay in Jatnavegur near Vagar on the Faroe Islands on August 22, 2018 (Getty/Mads Claus Rasmussen)
--

You’ve likely seen the images in your news feed. A blood-stained Scandinavian bay. Dozens of small, black whales lying dead on the shore or in the shallows. And an equivalent number of exhausted, soaked, Nordic men—and if you look closely, a few women—their faces speckled with the same blood that reddened their harbor, their hands gripping large metal hooks, stout ropes, or medieval-looking lances, all reminiscent of the Vikings from whom they’ve descended. The Faroe Islands: home of the grindadráp, or pilot whale slaughter.

Meanwhile, across the Atlantic, another whaling scene unfolds that, so far, has escaped the global attention focused on the Faroese. Small boats set out each morning from the humble fishing village of Barrouallie on the Caribbean island of St. Vincent. At the bow of each vessel stands a harpooner, who grips the stand to which his gun is mounted and scans the horizon for the spray from a blowhole or the ripple of a dorsal fin. When he spots a whale or dolphin he instructs his crewmember at the stern to approach it closely enough for him to fire a harpoon into its flesh. After a successful day of whaling, the boat motors back to the island, a half dozen or so whales and dolphins tied to the boat’s gunwales or piled in its hold.

In the Faroe Islands and St. Vincent, dolphins and small whales are hunted for human consumption. I’ve spent the past decade living among, learning from, and — yes — whaling with the Faroese and Vincentians. I began the project focused on conservation; I wanted to know if Faroese and Vincentian whaling was sustainable. Over the years, as I’ve found more evidence for sustainable whaling, my concern has shifted from the conservation of whales to the wellbeing of the whalers themselves.

The foods that whaling produces are traditional components of Faroese and Vincentian cuisine, but their healthfulness is in doubt due to the presence of pollution in the marine environment. Because of their position as apex predators, many marine mammals accumulate high concentrations of contaminants absorbed by the organisms they feed upon: a textbook case of the phenomenon known as biomagnification. When humans eat whales, we become the apex predators and the contaminants contained within their tissue accumulate in us. The health effects can be severe: diseases of the cardiovascular, immune, neurological, and reproductive systems have all been connected to the contaminants found in whale meat and blubber.

For most people, this isn’t a problem. We’ve grown accustomed to thinking of whales as animals for protection, not consumption. People opposed to whaling use diverse methods to express — and in some cases, enforce — their views. Anti-whaling activities have ranged from public protests and boycotts to more direct actions such as harassing whalers, physically impeding their whaling activities, and even — as Paul Watson of the Sea Shepherd Conservation Society proudly admits to orchestrating — the sinking of two whaling ships in Reykjavík harbor.

The contaminant issue in the Faroe Islands is so severe that, in 2008, the Chief Medical Officer issued the stark assessment that, “it is recommended that the pilot whale is no longer used for human consumption.” Take a moment to consider what this meant from a Faroese perspective. The Faroese have continuous whaling records dating back to 1709. Discontinuous records go back to 1587. Most scholars believe whaling was introduced by the Vikings who settled the Faroes during the 10th century. The medical report addressed this long history by acknowledging that, “the pilot whale has served the Faroese well for many hundreds of years and has likely kept many Faroese alive through the centuries.” But history isn’t reason enough to keep whaling. The report went on to point out that “the times and the environment are changing,” before reiterating the recommendation to stop eating whale.

The people listened. In 2009, the year after the recommendation was issued, I interviewed over 200 Faroese youth on topics related to whaling. About twenty percent reported that they had reduced their consumption of whale meat and blubber—if not stopped it completely — in direct response to the recommendation. I didn’t expect the entire country to quit instantly. Twenty percent during the first year was an encouraging start. It seemed that the Faroese, at least the youths whom I surveyed, respected the findings of their own public health scientists.

And then Sea Shepherd arrived. In 2010 Paul Watson’s conservation organization began a direct-action, anti-whaling campaign that continued until 2015 and was featured in the Animal Planet series, “Whale Wars: Viking Shores.” Along with the attempts to directly interfere with whaling activities, Sea Shepherd began to include references to the contaminant research in its rhetoric. Other environmental organizations followed suit. The Environmental Investigation Agency called the Faroese government “astoundingly irresponsible” for allowing its citizens to eat “toxic meat and blubber.” A grassroots organization known as Champions for Cetaceans hosted a “tweetstorm,” by which prewritten messages could be sent from any willing participant’s Twitter account. Forty percent of the 95 prewritten messages referred directly to the contaminant issue.

This might seem perfectly logical: if you’re opposed to whaling, you want to meet the whalers where they are. Don’t boycott their seafood industry, don’t call them barbarians, don’t sink their ships. Connect with them on the shared desire to live a healthy life. The problem here was in the execution. Messages about contamination were intermingled with all the other forms of anti-whaling action and discourse. To the Faroese, eating whale meat and blubber became a way to express national solidarity, to oppose the voices from abroad telling them to stop. And, although those voices spoke truth with regard to the contaminant issue, the collective desire to stand up against them overpowered health concerns. What once had been a diverse Faroese spectrum of views regarding whaling — ranging from fully against to fully in support of — collapsed into an “us-versus-them” monolith. The Faroese hunt whales and no one can make them stop.

To an environmentalist who seeks to stop whaling, this is a disaster. Your message, which included statements about animal cruelty, marine ecology, and public health was meant to be a broadly persuasive and multifaceted argument against whaling. Instead, because of the way in which it was communicated, your message provoked a nationalistic response by which whaling became enmeshed with identity. To eat whale, in the Faroe Islands, became a political act. The downward trend in whale meat and blubber consumption in response to the 2008 dietary recommendations has since shifted upward.

This is a disaster for the Faroese as well. With each meal of whale meat and blubber—called grind og spik and widely considered to be the Faroese national dish—you assert your national identity, repudiate the foreign environmentalists, and also poison your body, your mind, and, potentially, your future children. To many Faroese, the risk is worth making the statement.

Let’s travel, briefly, back to the Caribbean. In St. Vincent, the issue of environmental contaminants is just beginning to be understood. Early data show concentrations there much higher than what’s been found in the Faroe Islands. It’s nearly inescapable that, when a Vincentian dietary recommendation is released, it will include the line, “no longer used for human consumption.”

To date, very little anti-whaling activism has taken place in St. Vincent. Ironically, this might have created an environment in which people are more receptive to findings related to environmental contaminants and to the dietary recommendations that follow. It might make the end of whaling come more easily. In St. Vincent, there is no major outside voice telling people to stop whaling. But there have been small voices and louder ones might follow. If that were to happen, why would we expect the Vincentians’ reaction to be any different than that of the Faroese? Eating whale might become a way to assert your Vincentian identity. In doing so, human health would invariably suffer. More whales and dolphins would surely die and more people might as well.

The solution to this problem may be elusive but it’s not impossible. In any whaling community where environmental contaminants are found, the voice that communicates the need to stop whaling must be a local voice. Foreign expertise will play a vital role but only if packaged together with both respect and finesse. Knowledge about the health risks involved will almost certainly result in reduced consumption in St. Vincent, like it did in the Faroe Islands, but not if the knowledge is conveyed through a “tweetstorm” or through disparaging remarks. Instead, environmentalists — among whose ranks I proudly count myself — should resist the urge to directly oppose Vincentian whaling and, as difficult as it may be in our quest for immediate results, wait while the science is communicated and the public makes well-informed, health-related choices. Doing so will protect the wellbeing of both the whales and the whalers.

Russell Fielding has spent over a decade embedded among the artisanal whaling communities of St. Vincent & the Grenadines in the Caribbean and the Faroe Islands in the North Atlantic, documenting the hunt of pilot whales for human consumption. His just-released book is called "The Wake of the Whale."