Right to end life on Earth: Can corporations that spread climate change denialism be held liable?

If a corporation's propaganda destroys the world, doesn't that conflict with our right to live? 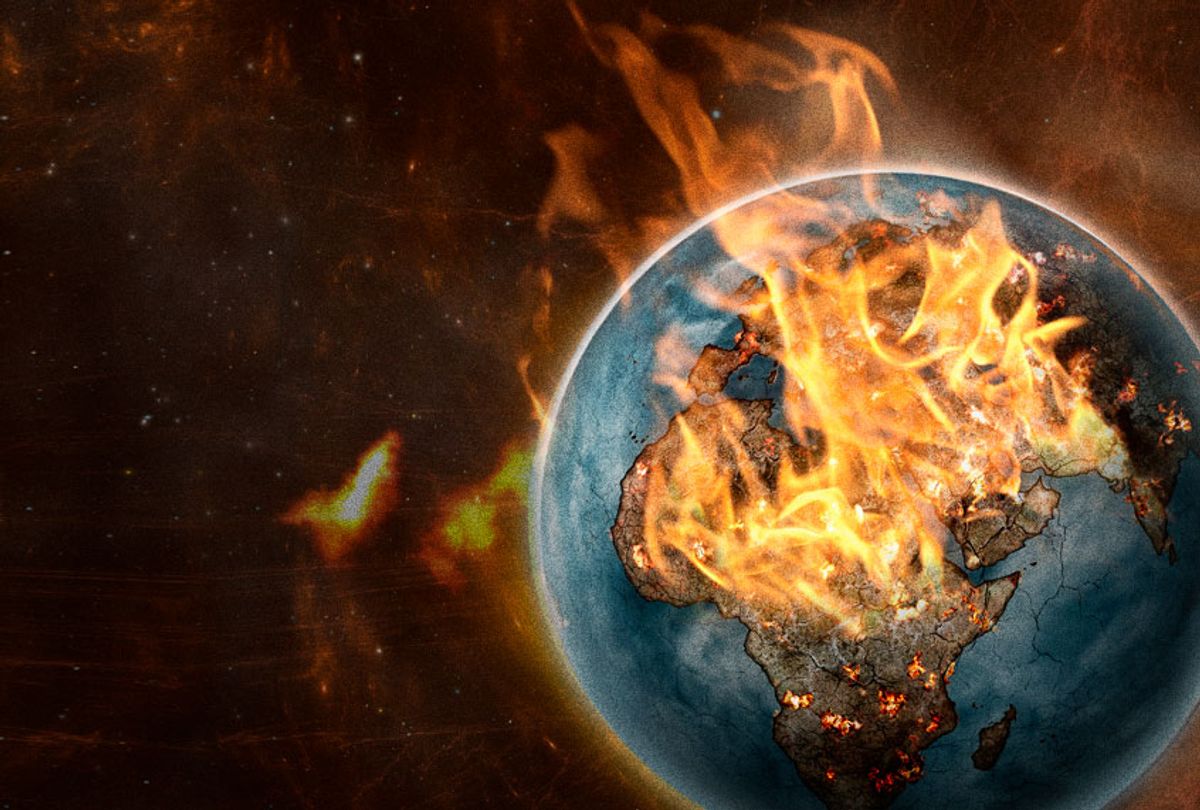 To facetiously paraphrase a line that I often hear from global warming deniers: Don't be offended, I'm just asking questions.

It’s conventional wisdom that the right to free speech does not permit you to shout “fire!” in a crowded theater – but does that mean you have the right to claim there is no fire when a theater is ablaze?

This is the question posed by the existential crisis of man-made global warming, and it is one that doesn't lend itself to an easy answer. Certainly it can be acknowledged that man-made global warming has forced us to re-examine other verities that once underpinned the modern liberal political order. Laissez-faire economic theory, which holds that state regulation of the economy is an unequivocal social ill, doesn’t stand up when you consider that insufficient environmental regulations got us into this mess and stronger ones will be necessary to mitigate the damage. A similar observation could be made about the consumerist ethos that drives free market economic models: A status quo of constant expansion may be economically healthy within the paradigm of capitalist markets, but it is devastatingly unsustainable when it comes to the fitness of our planet.

These are more obvious conclusions, and more comfortable ones too, since anyone who doesn’t view free market economic theory as a dogma akin to a secular religion (that is, anyone who hasn’t drunk the right-wing Kool-aid) admits that we can increase state regulations over the economy without fundamentally eroding human freedom. Yet the same cannot be said thinking that civil or even criminal penalties should be imposed on the men and women who abuse free speech to insist that the Earth is not heading toward catastrophe when the scientific evidence conclusively proves otherwise.

“Tempting though the idea is, I would not favor modifying Western legal systems to permit the imposition of financial liability on any individual or organization that is found to have ‘spread incorrect information about man-made climate change,’” Laurence Tribe, an author and constitutional law professor at Harvard, told Salon by email. “The key to my reason for resisting such a modification is in the word ‘found.’ If I ask myself: Whom would I trust to make an authoritative ‘finding’ about which information about a topic as complex as man-made climate change is ‘incorrect,’ I must answer: Nobody. Certainly not any public official or governmental agency or any government-designated private group. I trust the process of open uncensored dialogue among experts and lay persons to generate truthful understandings over time, especially if we enact and enforce requirements of transparency and disclosure about who is funding which assertions. But I would be deeply concerned about anything resembling the identification and empowerment of a Commissar of Truth.”

He added, “That said, I am not opposed to litigation against particular corporations – take Exxon, just for illustration – based on clear and convincing proof (to the satisfaction of a judicially supervised jury) that those corporations (or the individuals who direct their activities) deliberately falsified research results or other data in order to cover up their own knowledge about how and to what degree their own products or services and those who purchase them contribute to anthropogenic climate change."

"Such litigation," Tribe continued, "would be predicated on classic principles of economically motivated fraud and would avoid the pitfalls and perils of establishing an official scheme for determining what is true and what is false in the world of scientific claims. Such official schemes amount to government censorship, and I think we are better off if we assume that all such censorship can and in the long run will be turned to evil ends.”

Michael E. Mann, a professor of atmospheric science at Penn State University, shared his own views on whether individuals who mislead the public about climate change should face penalties for doing so.

“In my book ‘The Hockey Stick and the Climate War,’ I state that those who knowingly misled the public and policymakers about the reality and threat of climate change must be held responsible for their actions, and that includes legal repercussions,” Mann told Salon. “Note that there is a distinction between those at the top (e.g., fossil fuel executives and lobbyists and the politicians in their pocket) who are guilty of misleading the public, and those at the bottom (the typical climate denying trolls we encounter on the internet) who in many cases are actually victims of the disinformation campaign.”

Kevin Trenberth, a distinguished senior scientist in the Climate Analysis Section at the National Center for Atmospheric Research, broke down the situation in a similar way.

“Yes but. The ‘but’ is the difficulty in doing so and how one assigns blame,” Trenberth told Salon. “I do think that the other countries in the world ought to put something like a 25% tariff on all American goods on the grounds that they were produced using artificially low energy prices. This comes back directly to the government policies (of getting out of the Paris agreement), for instance."

"I doubt it will happen because of the might of the [money]," Trenberth continued. "I do think that politicians like Trump and the Republicans will go down in history as major bad guys (and gals).”

Tribe also acknowledged that, while it is questionable whether climate change deniers should be held financially accountable for spreading misinformation, harsher consequences should be imposed on government officials who shirk their responsibility to the public.

“I certainly favor holding government officials accountable for deliberately withholding information of public importance, let alone information about existential threats, when the release of that information would not genuinely threaten national security (e.g., by ‘outing’ the identity of CIA operatives in the field),” Tribe pointed out. “Imposing such accountability on government officials furthers the values of free and open expression that the First Amendment protects and does not in any way entail the worries about censorship and its dangers that I mentioned in my first answer. On the contrary, it is settled that ‘government speech’ is not shielded by the First Amendment at all. See, e.g., Walker v. Texas Division, Sons of Confederate Veterans (2015).”

Expanding on Tribe’s point, there is no reason that Republican Party politicians who have access to reliable information about the threat posed by man-made climate change and choose not to act on it — or even actively suppress it — should not be held legally accountable for doing so. While it is tempting to focus on President Donald Trump in this respect, it is important to remember that most of his fellow Republicans share his climate change denialism and likely would have acted similarly when it comes to stifling scientific research and ignoring the threat of global warming. While Trump should be held accountable for what he has done, it would be folly to forget that on this issue, his actions are entirely consistent with the will of his party.

And should that entire party be held legally accountable? Like Tribe, I would argue no, but the answer doesn’t entirely sit well with me. Whether they ignore man-made climate change because they hate liberals and wish to defy them, or because admitting to its reality would force them to modify their economic philosophy, or for any other reason, the bottom line is that they are convincing people that the theater isn’t on fire even as it continues to burn to the ground. The fact that the prevailing concepts regarding political freedom protect their right to abet the conflagration, but not the rights of those whose lives will be destroyed in the process, demonstrates that — if nothing else — our ideas about preserving freedom and justice in a civilized society need to be updated.