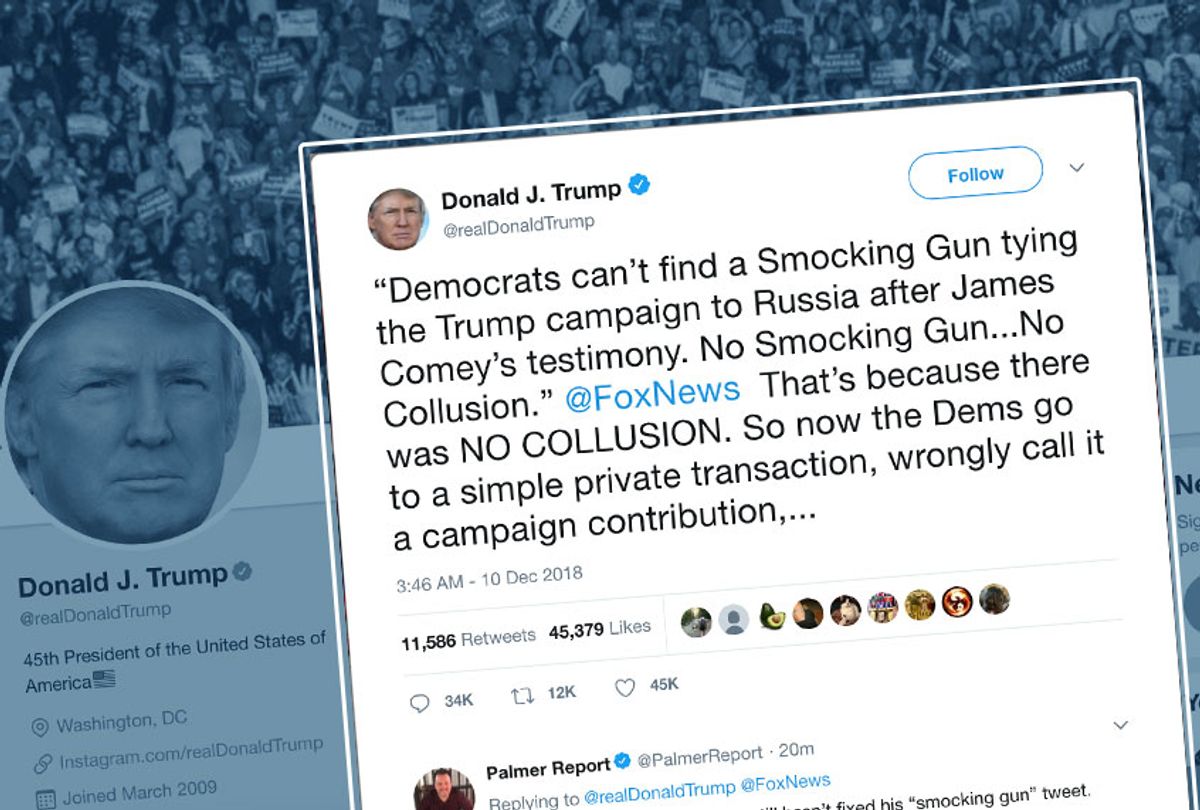 When President Donald Trump tweeted on Monday morning that Democrats had not been able to prove he had colluded with Russia during the 2016 election, he probably wanted to stir up a conversation.

"'Democrats can’t find a Smocking Gun tying the Trump campaign to Russia after James Comey’s testimony. No Smocking Gun...No Collusion.' @FoxNews That’s because there was NO COLLUSION. So now the Dems go to a simple private transaction, wrongly call it a campaign contribution," Trump tweeted on Monday.

Perhaps the most notable detail here is that Trump used "smocking gun" twice, suggesting that it wasn't an innocent typo but rather a genuine misconception regarding how to spell the word "smoking."

Not surprisingly, Twitter lit up over Trump's faux pas.

One of the funniest tweets came from CNN commentator Chris Cillizza, although I must respectfully disagree with his analysis: "Smocking Gun" sounds way more '90s grunge than '80s.

Political analyst Brian J. Karem also pointed out that, because Trump has by his own admission not read any of the relevant materials, he has no way of authoritatively claiming that he has been proved innocent, whether by the absence of a smoking gun or a smocking variety.

Cillizza, Tribe and Karem were not alone among celebrities who jumped on the "smocking gun" bandwagon, with most leaning toward Cillizza's humorous tone.

The "smocking gun" gaffe may seem reminiscent of Trump's infamous 2017 "covfefe" tweet (he wrote, "Despite the constant negative press covfefe"), but there are two key reasons why those similarities are superficial. First, the "covfefe" tweet could be chalked up to a genuine typo rather than a reflection of ignorance. As already noted, considering that Trump wrote "smocking" twice in the same tweet, it is difficult to use that same excuse here.

Second, and most important, is the fact that the "smocking gun" tweet was written with an arrogance that was undercut by its own faux pas. Absolutely crucial to the president's success is his ability to convince followers of his own authority; he is supposedly stronger, braver and smarter than all who criticize him. While it would be cruel to hold someone up to a standard of perfection if they were humble about themselves and forgiving toward others, Trump goes out of his way to puff out his own chest and pounce on the shortcomings he perceives in others. When his credibility in doing these things is brutally undercut by his own ignorance, it is fair — and arguably righteous — to rejoice.

Does this mean that Trump supporters will be humbled? Most likely not. My prediction is that, like "Dilbert" cartoonist and embarrassingly adoring Trump fan Scott Adams wrote after the "covfefe" flap, this will be characterized as "delightfully human" and perhaps even praised as Trump leaving up a mistake so that the country could get a much-needed laugh. Barring that, it will be waved off and forgotten.

If nothing else, though, it is distracting us for a few more moments from the fact that there are plausible reasons to believe our president conspired with a hostile foreign power to win his election. In that sense, perhaps this was a win of some kind for the president, whose Twitter hot streak has left him positively smocking.