Time's 2018 "Person of the Year" goes to Jamal Khashoggi, murdered and targeted journalists 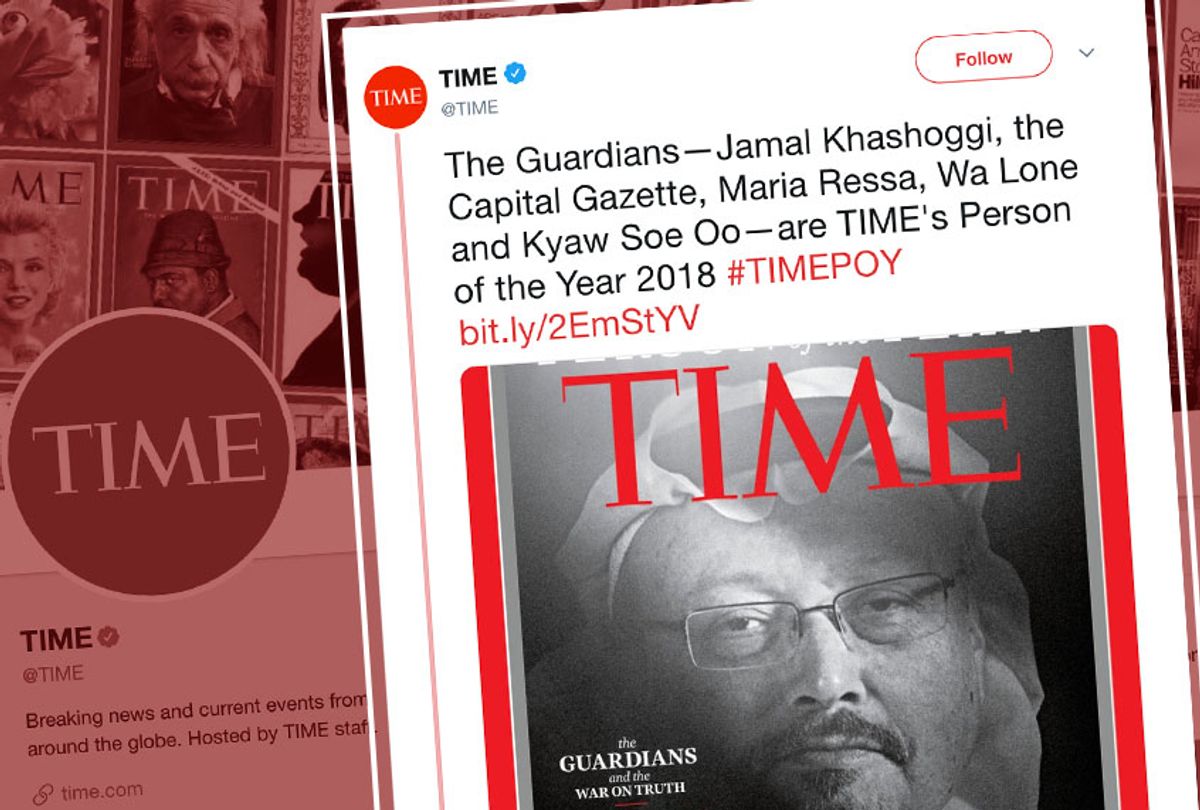 Jamal Khashoggi on the cover of 'Time' (Twitter/TIME)
--

Time Magazine's "Person of the Year" award went to a number of people in 2018 — all of them journalists who, like Jamal Khashoggi, have faced danger or had to pay a terrible price in the name of their pursuit of truth.

"Like all human gifts, courage comes to us at varying levels and at varying moments. This year we are recognizing four journalists and one news organization who have paid a terrible price to seize the challenge of this moment: Jamal Khashoggi, Maria Ressa, Wa Lone and Kyaw Soe Oo and the Capital Gazette of Annapolis, Md," Edward Felsenthal, the magazine's editor-in-chief, wrote in an essay about why those journalists had been honored by Time Magazine in its historic tribute.

The Capital Gazette is the newspaper in the Maryland capital of Annapolis where four journalists and a sales assistant were killed by a gunman. Wa Lone and Kyaw Soe Oo are a pair of Reuters journalists who were arrested in Myanmar while investigating the massacre of Rohingya Muslims. Maria Ressa is the editor of a news website in the Philippines that has been critical of the violent policies of President Rodrigo Duterte, at much risk to Ressa herself. And Jamal Khashoggi is the former Washington Post journalist who American and Turkish intelligence agencies believe was lured into a Saudi Arabian embassy in Istanbul and brutally murdered for his criticisms of that nation's crown prince, Mohammed bin Salman.

Although President Donald Trump, the runner-up on Time's list, has repeatedly defended the Saudi crown prince and publicly bought into the government's professions of its own innocence, many of his fellow Republicans have parted ways with him on that issue.

"I never thought I’d see the day a White House would moonlight as a public relations firm for the Crown Prince of Saudi Arabia," Sen. Bob Corker of Tennessee wrote on Twitter about Trump's defenses for the Saudi royal family. He also wrote in a pair of tweets that "Congress will consider all of the tools at our disposal to respond, including requiring by law a determination on the role of MbS" and "'Maybe he did and maybe he didn’t' won’t cut it. So tonight, @SenatorMenendez and I sent a second Global Magnitsky letter to the president requiring that he specifically determine whether Saudi Crown Prince Mohamed bin Salman is responsible for the murder of Jamal #Khashoggi."

Sen. Lindsey Graham of South Carolina has also criticized Trump's behavior on Twitter, writing that "under the law, the president is now required to determine whether MbS is responsible and report to our committee with a determination and a decision on the imposition of sanctions. Time and time again President Obama chose to look the other way as Iran took increasingly provocative actions. Each time it led to even worse Iranian behavior and created even larger problems for the future."

Meanwhile, the House of Representatives votes today on a bill devoted to "calling on the Government of Burma to release Burmese journalists Wa Lone and Kyaw Soe Oo sentenced to seven years imprisonment after investigating attacks against civilians by Burma’s military and security forces, and for other purposes."