Trump tells Fox News he did not instruct Cohen to do wrong: "Whatever he did, he did on his own"

Trump admits that he regrets hiring Cohen. "In retrospect, I made a mistake," he said. "I hire usually good people" 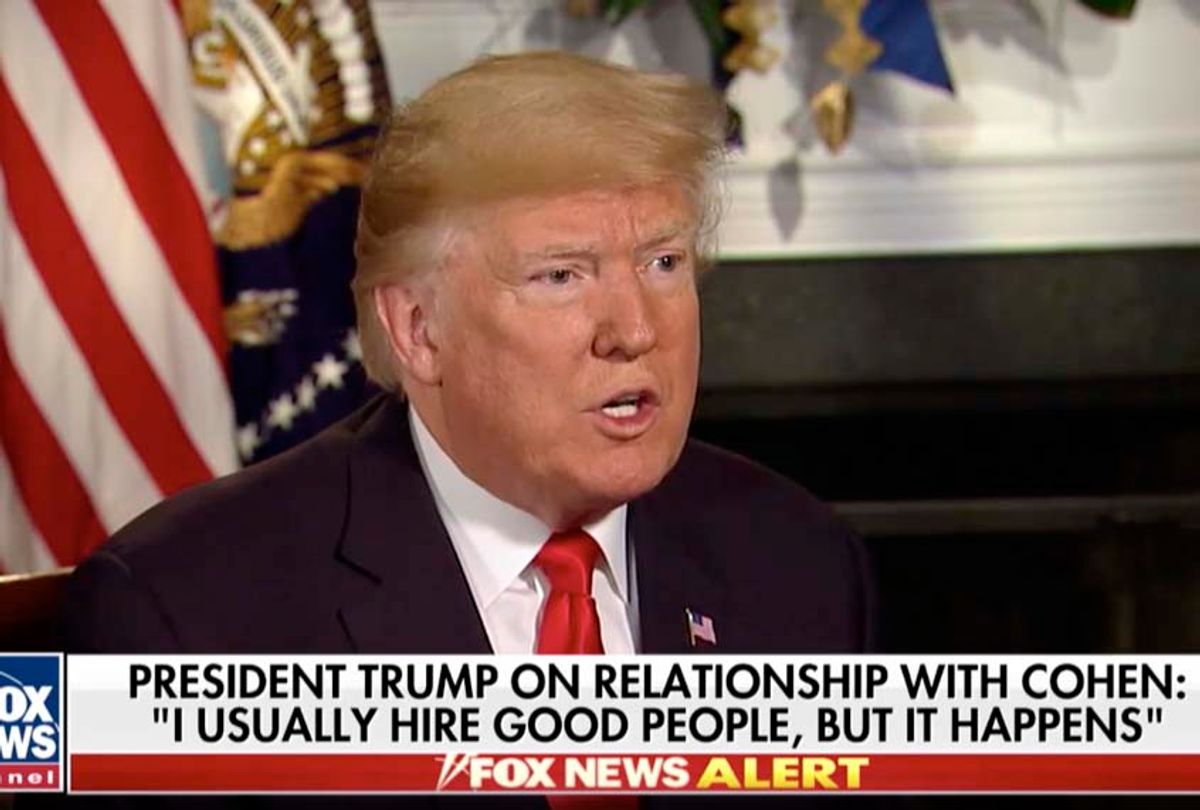 President Donald Trump denied on Thursday that he never instructed Michael Cohen, the attorney who spent many years working as his personal "fixer," to break the law during the 2016 presidential campaign by buying the silence of two women who alleged affairs with the future commander-in-chief.

In his first TV sit-down interview since Cohen was sentenced to prison on Wednesday, the president told Fox News that he "never directed him to do anything wrong. Whatever he did, he did on his own."

Trump also dismissed Cohen's allegations an attempt to "embarrass him" and secure a reduced prison sentence — a statement he made on Twitter earlier on Thursday. "It's a terrible system we have," Trump said of that deal.

Cohen was sentenced to three years in prison on Wednesday for what U.S. District Judge William H. Pauley III called a "smorgasbord" of crimes, involving lying to Congress about a plan to build a Trump Tower in Moscow, tax evasion, making false statements to a bank and campaign finance violations stemming from payments to two women who alleged affairs with Trump during the 2016 presidential election. Cohen, speaking in court, implicated the president in those transactions and confessed that he felt it was his duty to cover up Trump's "dirty deeds."

In his interview with Fox News, Trump, once again, attempted to downplay the crimes that Cohen had pleaded guilty to and implicated the president in. He insisted that the hush payments made by Cohen to adult film star Stormy Daniels and former Playboy playmate Karen McDougal were "not a campaign finance violation." Earlier this week, Trump claimed that payments to Daniels and McDougal women were "a simple private transaction" rather than a violation of campaign finance law.

He also said that, even if the hush-money payments were campaign transactions, any failure to obey federal election regulations should be considered only a civil offense – not a criminal one. "What he did was all unrelated to me except for the two campaign finance charges that are not criminal and shouldn't have been on there," Trump said of Cohen. "They put that on to embarrass me."

The president recalled how he first hired Cohen to do "low-level work," because he did a "favor" for him on the condominium committee for Trump World Tower in Manhattan. Trump said that Cohen was "a very big supporter of mine on that committee," and "I thought he was a great guy." The president admitted that he regretted hiring Cohen. "In retrospect, I made a mistake," he said. "I hire usually good people."

The president's interview with Fox News came after he slammed Cohen in a series of tweets Thursday morning. "I never directed Michael Cohen to break the law," Trump tweeted on Thursday. "He was a lawyer and he is supposed to know the law. It is called 'advice of counsel,' and a lawyer has great liability if a mistake is made. That is why they get paid."

Prosecutors have echoed Cohen's admission that Trump instructed his former lawyer to pay off Daniels and McDougal. Those actions could imperil the president if prosecutors can prove he knew in advance about the payments.