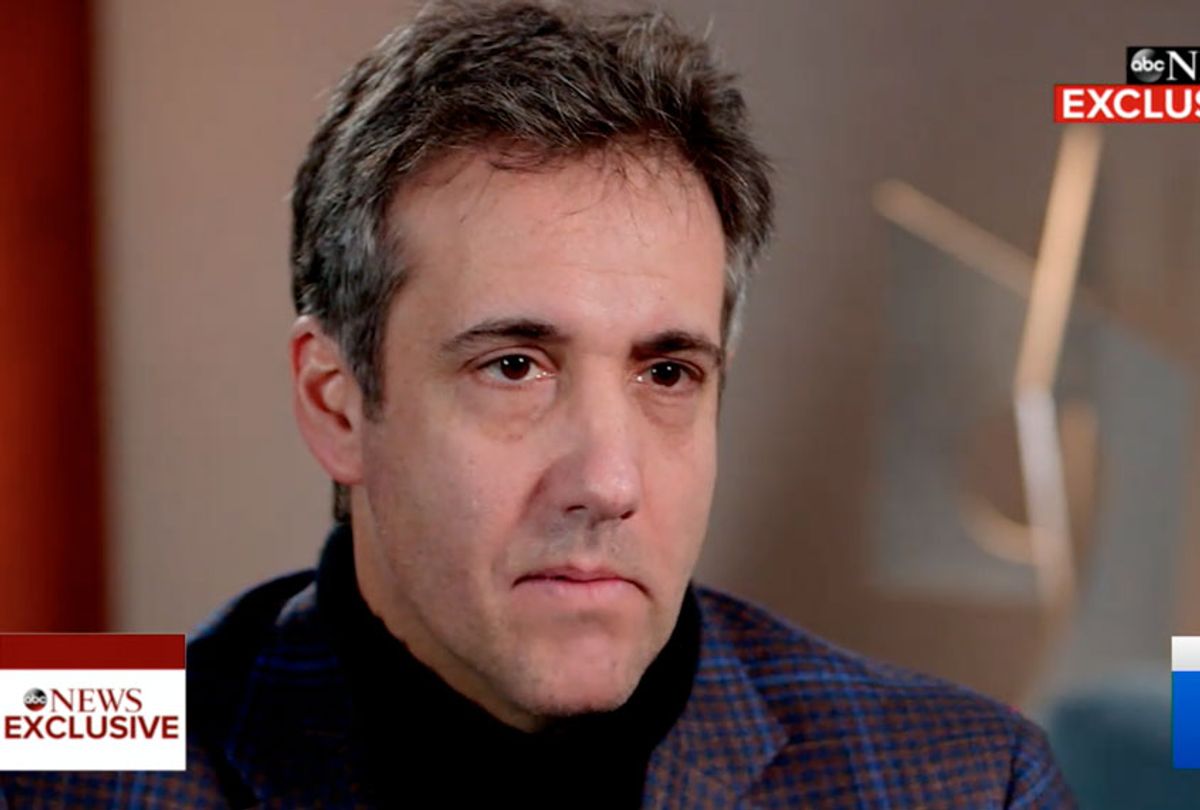 Michael Cohen, the attorney who spent many years working as President Donald Trump's personal "fixer," claimed that his former boss directed him to break the law during the 2016 presidential campaign by arranging hush-money payments with two women who alleged affairs with the future commander-in-chief.

In his first televised interview since being sentenced earlier this week to three years in prison for what U.S. District Judge William H. Pauley III called a "smorgasbord" of crimes, Cohen told "Good Morning America" that Trump instructed him to arrange the hush-money payments because then-candidate Trump "was very concerned with how this would affect the election" if the allegations of the affairs became public.

"I knew what I was doing was wrong," Cohen told ABC's George Stephanopoulos. "I stood up before the world [Wednesday], and I accepted the responsibility for my actions."

Cohen on Wednesday was sentenced to federal prison for a series of offenses, involving lying to Congress about a plan to build a Trump Tower in Moscow, tax evasion, making false statements to a bank and two campaign finance violations stemming from payments to adult film star Stormy Daniels and former Playboy playmate Karen McDougal — the two women who alleged affairs with Trump during the 2016 presidential election. Cohen, speaking in court, implicated the president in those transactions and confessed that he felt it was his duty to cover up Trump's "dirty deeds."

When asked if the president also knew it was wrong to make the payments, Cohen replied, "Of course," adding that the purpose was to "help [Trump] and his campaign."

Cohen admitted he is "angry at himself" for his role in the deals, but that he did it out of "blind loyalty" to Trump — a claim he reportedly made Wednesday in court. "I gave loyalty to someone who, truthfully, does not deserve loyalty," he said.

Federal prosecutors have echoed Cohen's admission that Trump instructed his former lawyer to pay off Daniels and McDougal. In court filings, they allege that Cohen arranged the deals "in coordination with and at the direction of the candidate," referring to Trump, "for the principal purpose of influencing the election" for president in 2016. The $130,000 payment to Daniels and $150,000 payment to McDougal are considered by the government to be an illegal donation to Trump's campaign, since they were allegedly intended to improve Trump's election chances. The legal limit for individual contributions is $2,700 in a general election.

Prosecutors have also reached a non-prosecution agreement with American Media, Inc. (AMI), the parent company of the National Inquirer, in which the tabloid admitted it paid hush money to McDougal before the 2016 election "in concert" with the Trump campaign. The president has denied allegations of the affairs, but he has provided shifting explanations about when he learned about the payments to the women. Earlier this week, Trump insisted that the hush-money payments to women were "a simple private transaction" unrelated to the campaign. He also argued that, even if the hush-money payments were campaign transactions, any failure to obey federal election regulations should be considered only a civil offense – not a criminal one — and Cohen bore responsibility if anything illegal occurred.

Trump has railed against Cohen since his sentencing, asserting in a Thursday tweet that his former personal lawyer only agreed to plead guilty "in order to embarrass the president and get a much reduced prison sentence, which he did."

"It is absolutely not true," Cohen told Stephanopoulos. "Under no circumstances do I want to embarrass the president. He knows the truth. I know the truth."

Cohen appeared especially upset by another Trump tweet on Thursday, in which the president implied that prosecutors investigating Cohen had let his wife and father-in-law off the hook. "Instead of him taking responsibility for his actions, what does he do?" Cohen said. "He attacks my family."

Cohen also refuted the president's assertion that he never directed Cohen to do anything wrong. "I don't think there is anybody that believes that," Cohen said. "First of all, nothing at the Trump Organization was ever done unless it was run through Mr. Trump. He directed me to make the payments. He directed me to become involved in these matters."

When asked about his convictions for lying to Congress and for tax evasion and banking crimes, Cohen said he was "done with the lying. I am done being loyal to President Trump, and my first loyalty belongs to my wife, my daughter, my son and this country."

"Why should we believe you now?" Stephanopoulos asked.

"Because the special counsel stated emphatically that the information that I gave to them is credible and helpful," Cohen replied. "There's a substantial amount of information that they possessed that corroborates the fact that I am telling the truth."

Cohen, who is due to report to prison on March 6, has said that he is willing to continue to answer questions for special counsel Robert Mueller, who is investigating allegations of collusion between Trump's 2016 presidential campaign and the Russian government, and other federal and state investigators.

He declined in the interview to detail specific questions about the Mueller investigation, which is ongoing, "out of respect for process." "I don't want to jeopardize any of their investigations," he added.

When asked if he thinks the president is telling the truth about the probe, Cohen replied, "No."

Cohen, who was previously one of the president's most loyal and ardent defenders in business in politics, indicated earlier this year that his loyalty to Trump might be wavering as he vowed to "put family and country first" by cooperating with prosecutors. His decision to cooperate with Mueller has made him arguably one of the most key witnesses against his former boss — and the special counsel's office, for its part, appears to view Cohen as a valuable cooperator who can highlight Trump's business dealings as Mueller continues to probe any connection the president has to Russia.

"It's never good to be on the wrong side of the president of the United States of America, but somehow or another, this task has now fallen onto my shoulders. And, as I also stated . . . I will spend the rest of my life in order to fix the mistake that I made," Cohen said.

Cohen said, as he observes Trump's actions in the People's House, he struggles to recognize the man he worked for for more than a decade at the Trump Organization.

"He's a very different individual," Cohen said. "I think the pressure of the job is much more than what he thought it was going to be. It's not like the Trump organization, where he would bark out orders and people would blindly follow what he wanted done. There's a system here. He doesn't understand the system, and it's sad because the country has never been more divisive. And one of the hopes that I have out of the punishment that I've received, as well as the cooperation that I have given: I will be remembered in history as helping to bring this country back together."

"I will not be the villain of his story," Cohen added.